Greece should not be asylum base for FETÖ fugitives, FM Çavuşoğlu says 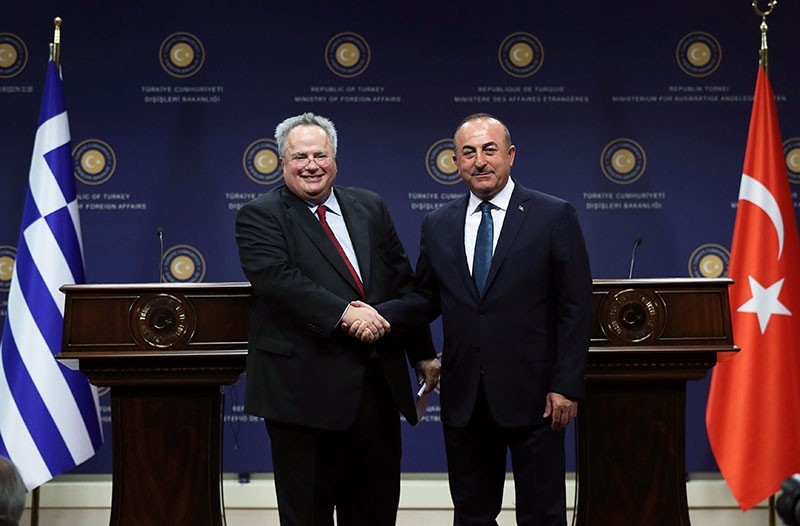 Foreign Minister Mevlüt Çavuşoğlu said yesterday Turkey does not want Greece to be an asylum for Gülenist Terror Group (FETÖ) fugitives, citing that since the failed coup attempt of July 15, 2016, 995 people have applied to the country for asylum.

"Unfortunately, Greek courts did not extradite these eight people to Turkey, which highly disappointed us since Greece is also a country that has suffered from coups in the past, as well as the Greek people. Thus, we were expecting that these people would be extradited to us according to Greek law. Yet, this expectation of ours has not been satisfied. We have also learned that the two former soldiers who attempted to kill President Recep Tayyip Erdoğan on July 15, also fled to Greece, and once more expressed our demand for the extradition of these soldiers," Çavuşoğlu said.

Underlining that both countries should take joint steps in the fight against terrorism, Çavuşoğlu said although Greece has taken steps against the Revolutionary People's Liberation Party-Front (DHKP-C) in the past, which Ankara highly appreciated, it is a fact that both the DHKP-C and PKK are still active in the country. "These terrorist organizations' activities should not be permitted since terrorism is an enemy to all of us and should be eliminated," he added.

Kotzias arrived in Turkey for a working visit on Oct. 24. During the meetings between the foreign ministers, bilateral relations as well as regional and international issues were discussed. The preparations for the fifth meeting of the High Level Cooperation Council (HLCC), to be held in Thessaloniki in the near future, were also discussed.

The foreign ministers discussed the increasing number of migrants illegally entering Greece from Turkey. Even though the Aegean Sea is patrolled to prevent irregular migration with the deal signed between Ankara and the European Union (EU) in 2016, a small number of migrants attempt to reach Greece on a daily basis, putting their lives at risk.

The foreign ministers previously met in Crans-Montana for the Cyprus talks that began on June 28. However, the talks to end the four-decade Cyprus conflict ended without a resolution and dashed hopes for a political remedy. The Eastern Mediterranean island was divided into Turkish Cyprus in the north and Greek Cyprus in the south after a 1974 military coup was followed by the intervention of Turkey as a guarantor power. After the failure of talks in Crans-Montana, the Cyprus conflict remains a significant political issue for Turkey, Greece and the island.

In relation to the extradition of FETÖ members, Ankara is seeking further cooperation with Athens in confronting the terrorist group after last year's failed coup attempt, as some FETÖ members who partook in the coup fled to Greece. After the coup attempt, eight soldiers, including two commanders, four captains and two sergeants, escaped to Greece on a Sikorsky helicopter and landed in Alexandropoulos. Ankara formally requested that Greece extradite the suspects. However, in April 2017, a Greek court ruled against the extradition of three out of the eight Turkish soldiers, which Ankara strongly criticized.