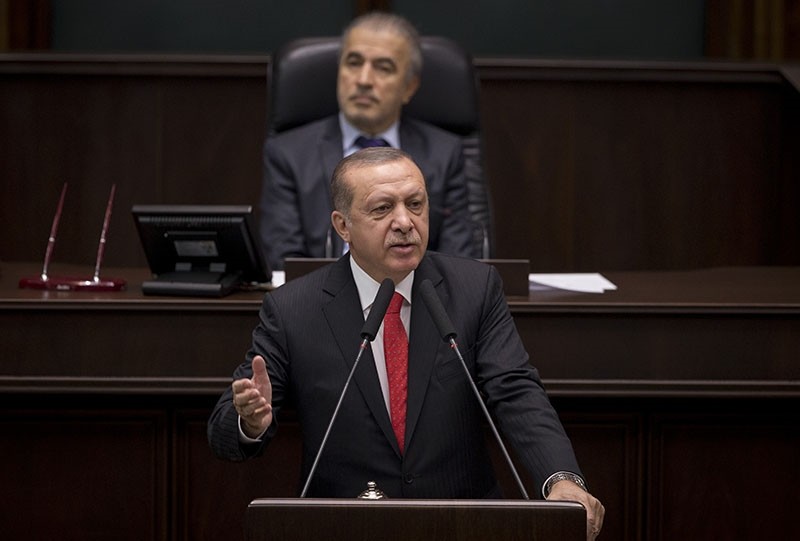 "As I have said before, we can hit [Afrin] at any moment," the president said at a group meeting of the Justice and Development Party (AK Party) in Parliament.

"The truth is evident. Our strategic partner, the U.S., carried out the Raqqa operation with the YPG despite our objections. They said the YPG and the PKK were not the same. Now, how can they explain Öcalan's [the PKK's leader's] poster in Raqqa? The U.S. delivered more than 3,500 truckloads of weapons to the region. We know where they were used," he said.

Turkey designates the PYD and the YPG as the Syrian affiliates of the PKK, which is recognized as a terrorist organization by the U.S., Turkey and the European Union (EU).

Continuous U.S. support for the YPG has stirred up tensions between Washington and Ankara. While Washington has insisted that the PKK and the YPG were two different organizations and supporting the YPG was the only option for defeating Daesh. Turkey, on the other hand, said instead of supporting and arming a "terrorist group," an alternative could be found with local Arab tribes, backed by other countries in the region.

Meanwhile, the latest reports from the ground in Idlib confirmed that the Turkish military deployment was complete and troops were stationed at Dar Ta izzah, near the Idlib-Afrin border.

Ankara is also reportedly eager to deploy troops at Abu al-Duhur airport and Taftanaz Military Airbase to completely surround Afrin, which is currently under the PYD's control.

Turkey's military began setting up observation posts in Idlib this month under a deal with Russia and Iran to reduce clashes between the opposition groups and the regime by establishing de-escalation zones. But the deployment was also seen as partly aimed at containing the YPG militia.

Earlier this month, President Erdoğan announced that Turkey was conducting a "serious operation" with the Free Syrian Army (FSA) as part of the de-escalation deal.

The operation in Idlib is the second time in over a year that the Turkish military has crossed into Syria. The first, Operation Euphrates Shield, was launched on Aug. 24, 2016, in collaboration with the FSA. It liberated several Daesh strongholds, including Jarablus, Dabiq, al-Rai, and al-Bab.

The operation dealt a severe blow to Daesh and more than 2,000 square kilometers (770 square miles) of area in northern Syria was taken under control. More than 100,000 Syrian refugees have since returned to their hometowns in the liberated areas.