Syrian PYD terrorists brandish banners of PKK, Öcalan in yet another proof of ties 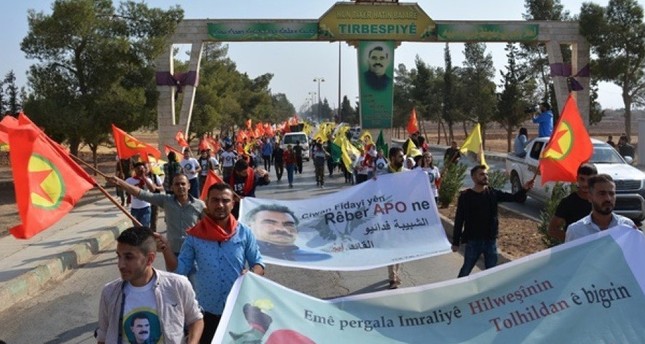 The PYD once again showed the world its undeniable ties to the PKK, while the United States still supports the group claiming it is “different”

Two photos showing militants of PYD brandishing banners of internationally recognized terrorist group PKK and its leader Abdullah Öcalan in Syria started circulating on social media late Wednesday in yet another proof for the ties between the two groups. 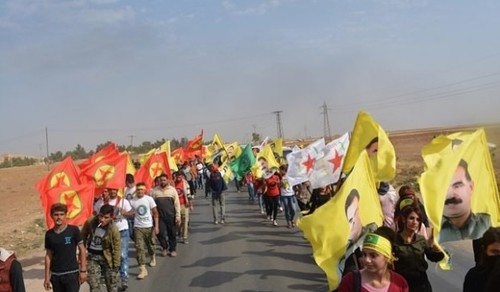 The PYD's ties to the PKK, recognized as a terrorist group by the U.S., Turkey, EU and many other parties, have surfaced several times since the Syrian civil war broke out, but perhaps the most striking instance was when PYD took over the bastion of Daesh terrorist group Raqqa.

While celebrating their victory, PYD terrorists lined up in front of a giant poster of Öcalan, sparking a new crisis between Turkey and the U.S., which provides great support to the group. 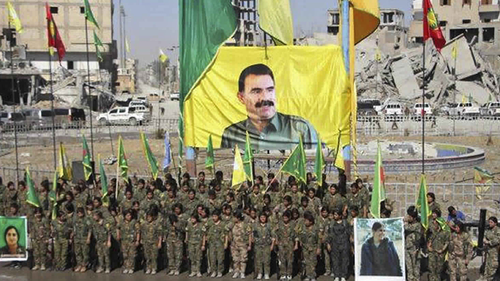 In a statement, U.S. Embassy in Ankara said that the terrorist group's leader does not deserve to be revered.

"The United States Government works closely with Turkey to fight terrorism and increase regional stability. The PKK is a Designated Foreign Terrorist Organization, and Öcalan is in prison in Turkey for acts of terrorism as part of the PKK. He does not merit veneration," the embassy said in a statement.

Despite the statement's hypocrisy in light of the amount of military support the superpower provides to Öcalan's militants in Syria, PYD terrorists were quick to condemn it, in a video in which they revered their so-called "leader," who has been in prison since 1999, in a fashion no different than North Koreans who are forced to worship the Kim dynasty.

The U.S.' support to the group has been a main concern for Turkey which has fought PKK terror for over 40 years. Nonetheless, the U.S. still fails to cut support to the Syrian PKK, claiming it is a short-term partnership to end Daesh terror.

Share on Facebook Share on Twitter
Previous in War On Terror Poland has rejected the asylum requests of 16 Gülenist Terror Group... Next in War On Terror Images from Raqqa have once more proved that the U.S.-backed Democratic...
DAILY SABAH RECOMMENDS