If threatened, Turkey will act against PKK terrorism in Iraq as it did in Syria 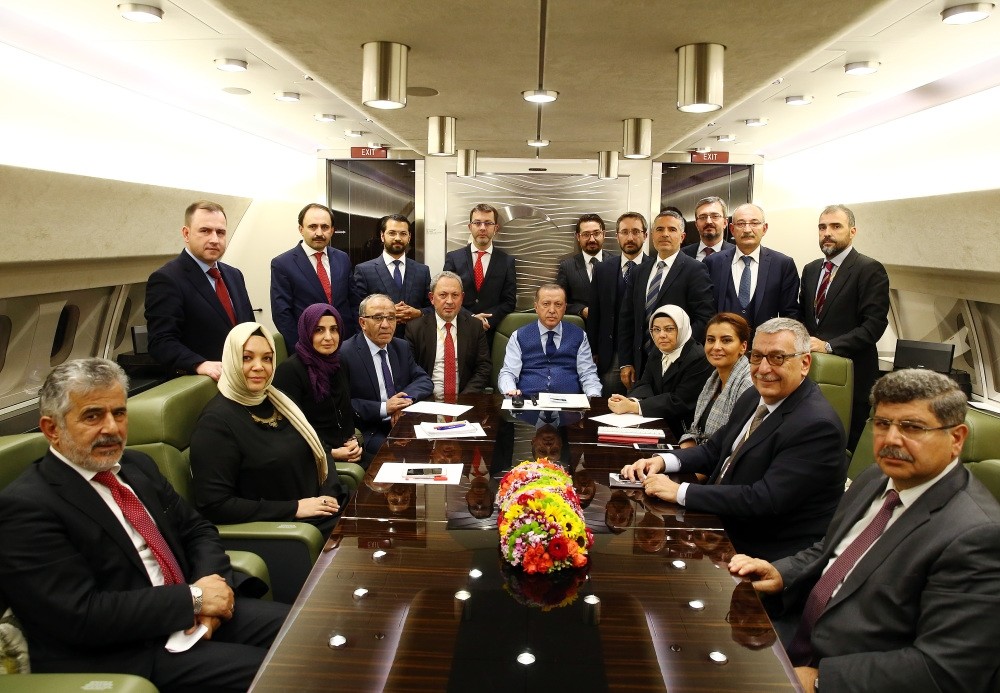 On his way back from Azerbaijan, President Erdou011fan told reporters that Turkey will not allow the PYD to establish an autonomous region in northern Syria.
by Serdar Karagöz
Nov 02, 2017 12:00 am

The Turkish military will not hesitate to eliminate PKK terror threats along its borders in Iraq, as it has done previously in Syria to tackle Daesh threats, President Erdoğan says

President Recep Tayyip Erdoğan said Wednesday on his return flight from Azerbaijan that the Turkish Armed Forces (TSK) took action against the PKK terrorist group across the border in Syria before and would do so again in Iraq if necessary. Using a map to explain Turkey's geopolitical concerns, Erdoğan said Ankara is continuing to consult with Tehran and Baghdad to ensure the territorial integrity of Iraq against possible actions taken by the Kurdistan Regional Government (KRG). Erdoğan said that Iraqi Prime Minister Haider al-Abadi's visit last month allowed Turkey and Iraq to settle on a united position with respect to the KRG, whose independence referendum created united opposition from regional and global powers.

The president said the PKK presence in Sinjar did not come up during talks with Abadi, but noted that the Iraqi prime minister was aware Turkey would take every measure necessary to eliminate threats emanating from Sinjar, which along with the Qandil Mountains house the largest PKK concentrations in the country. While Abadi and the central government were focused on destroying Daesh, the PKK was at best a secondary concern, Erdoğan admitted, but argued that Baghdad knew what Ankara would do if the PKK situation got out of hand.

"We have taken all the necessary precautions along our borders and if anything negative happens in Sinjar that risks our security, we may undertake cross-border operations. I told Abadi what should be done to avert such a scenario," he said.

He noted that rising threat posed by the PKK's Syrian affiliate Democratic Union Party (PYD) and its armed People's Protection Units (YPG) in northern Syria had forced Turkey's hand. The U.S. is aware of Ankara's concerns over American arms going to the PKK's affiliate in Syria, Erdoğan said.

"We decide on what to do in accordance with developments. Why did we take steps in Jarablus? Because they [U.S.] did not keep the promises they made," he said.

Failure to abide by their promises had forced Turkey to initiate a cross-border operation that liberated Jarablus from the PYD and YPG, Erdoğan said, adding that similar actions were taken in al-Rai, al-Bab and several other towns in 2,000 square kilometers of northern Syria.

"Now, we have the Idlib situation. Iblib's interior is controlled by us while its borders are controlled by Russia. We are in cooperation with Russia, which will soon cover Afrin as well," he explained.

He said the YPG concentration in Afrin could soon pose a threat because it borders Turkey.

He again pointed to a map of the region, saying, "They [PYD] claim that they will expand their corridor to the Mediterranean Sea. They may do this via Afrin by taking over Idlib. We will definitely not allow such a scenario."

For those who are asking why Turkish forces are in Syria, Erdoğan said the only answer is that "[t]here are terrorist groups here that harass us. We can and will conduct cross-border operations to eliminate all such threats."

Turkey has been heavily critical of the U.S.'s arms aid to the YPG, which openly professes its loyalty to the PKK's imprisoned leader, Abdullah Öcalan. The PKK is recognized as a terrorist group by the U.S. and EU.

The president also showed how much Daesh had retreated, only to be replaced with another terrorist group in the PYD and YPG.

"They told us that the YPG will eventually withdraw. They told us not to be concerned. Now, Manbij is under their control, as are many Arab-majority regions in northern Syria," he said.

"After Abadi's visit, the process of peshmerga handing over the Khalil Ibrahim border gate to the forces of the central government started. It will take a few days to conclude. Our 2nd Army commander is there to follow all the developments. So is the Iraqi chief of staff."

He said a direct link to Iraq independent of the KRG is important to send humanitarian supplies. All humanitarian aid will be delivered via the central Iraqi government, Erdoğan said.

He said the fate of Turkmens in northern Iraq is a particular concern for Turkey.

"We want Turkmens from Tal Afar to return to their homes. There are over 400,000 Turkmens, half of whom are Sunni and the other half Shiite. Due to Daesh offensives, 100,000 fled north toward Turkey, and another 100,000 south. Our aim is for all of them to return home. With that, hopefully, there will be no Sunni-Shiite divide."

On KRG President Masoud Barzani's planned retirement yesterday, Erdoğan said: "We will see what happens. I hope this will allow unification with the central government. We believe that's the only thing that will benefit Iraq. Just look at what happened in Spain. The person who headed the whole affair fled Spain. And where does he go? Belgium."

Once the Daesh presence in Syria and Iraq is eliminated, where the militants go and what they leave behind is important, he said.

"There are about 2,000 militants in Iraq. In other words, they are nearly finished. We don't know where they'll flee afterward, be it Africa or the U.S. or Europe. We will see. The most important issue after they are gone is what to do with local terrorist groups such as al-Nusra Front because the number of locals in Daesh is insignificant. What we want is for the Free Syrian Army [FSA], which we support, to take over all the land vacated by the terrorist groups," he said.

The completion of the Baku-Tblisi-Kars Railway, which was inaugurated by Erdoğan and his counterparts from Azerbaijan and Georgia on Monday, created a connection from Turkey to Kazakhstan, the president said. The aim is for the railway to eventually continue to London, the president added.

At the 6th High-Level Strategic Cooperation Council meeting on Tuesday between Turkey and Azerbaijan, the two countries had agreed to expand cooperation to education, trade, industry and several others areas, Erdoğan said.

Another objective is to increase the bilateral trade volume from $1.6 billion, not counting oil and oil products, to reach $5 billion annually.

Also, significant progress was made in eliminating the Gülenist Terror Group (FETÖ) presence in Azerbaijan, he said.

"Turkey will also continue to act in solidarity with Azerbaijan in its just cause of getting upper Karabakh back from Armenia. I will talk about the matter with Russian President [Vladimir] Putin when we meet next week or the week after. His attitude is very important. If he really focusses on the matter, it will be easily resolved."

On efforts to rejuvenate the ruling Justice and Development Party (AK Party), which he chairs, Erdoğan said the aim is to get ready for the local, parliamentary and presidential elections scheduled for 2019.

"All the steps taken should be seen in that light," he said, in reference to the resignations of several mayors in the past few weeks.

When asked whether the bureaucracy is in need of a similar rejuvenation process, Erdoğan cited Law 657 that guarantees a public servant's job.

"Under such a law, you can only transfer a public servant, which is hardly a fundamental change," he said.

He explained such rejuvenation necessitates a majority in Parliament, which he said he hopes will happen in the 2019 elections.

He said Prime Minister Binali Yıldırım and the Cabinet were responsible for the appointment of the head of the Sovereign Wealth Fund.

"I hope the appointment will take place soon," he said, insinuating that the current acting head, Himmet Karadağ, may be in the best position to take the post.