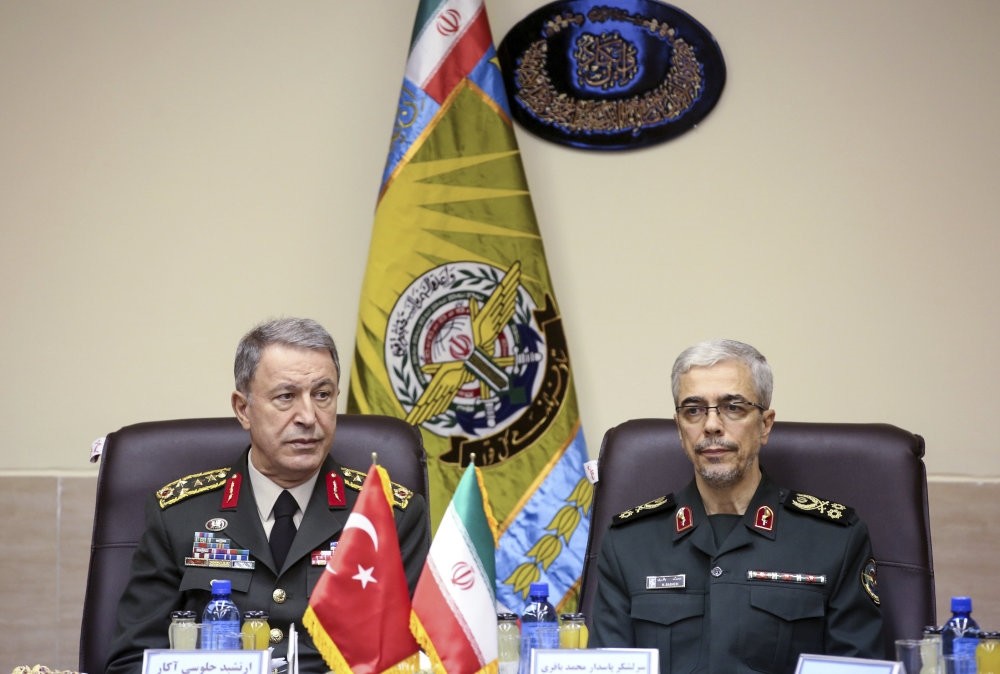 Tehran keeps warm relations with Ankara at the highest level as Iranian Deputy Foreign Minister İbrahim Rahimpour praised the cooperation between the two sides, hinting at a simultaneous operation against the PKK

Speaking to various Turkish media outlets earlier this week in Tehran, Iranian Deputy Foreign Minister Rahimpour said the Iranian administration is affirmative regarding an operation with Ankara against the PKK. "Iran and Turkey share the same borders. There are also triple boundaries. We have always cooperated on the borders of Iran and Turkey. We do not allow the PKK to cross our borders and carry out terrorist activities in Turkey. We are warmly looking for a common fight against terrorism," he said.

Announcing that the chiefs of general staff of Turkey, Iran and Russia are due to meet in the near future, Rahimpour said: "The Astana meetings are going well. We have good consultations with Turkey on regional issues. Soon, the chiefs of the general staff of Russia, Turkey and Iran will hold a trilateral summit. They will talk about the security of the region and fighting terrorism."

Gulam Riza Bagheri, director for Turkey, Russia, Central Asia and Caucasus Countries Affairs in the Iranian Foreign Ministry, said the Turkish-Iranian Anti-Terrorism Coordination Mechanism has been reactivated. Stressing that cooperation between Turkey, Iran and Russia is a must, Bagheri said for the stability of the region, foreign powers that came to the region should leave the region.

Touching on the situation in Idlib, Bagheri added that Turkey's steps on Idlib are important. "Turkey has begun establishing exploratory posts. Russia and Iran are also doing the work that falls on them. Turkey, Iran and Russia have a consensus on terrorist groups in Syria. There is no problem between us," he added.

Previously, Iranian Chief of General Staff Gen. Mohammed Bagheri visited Turkey, and his Turkish counterpart Gen. Hulusi Akar was received in Tehran. Akar met with Bagheri in early October, and both generals underscored that bilateral cooperation will increase in the areas of security and counterterrorism.

At the joint press conference held after the two generals met at the headquarters of the Iranian general staff in Tehran, Gen. Akar said: "Turkey and Iran have been two friendly countries with common values for centuries. Within these common values, we are improving our cooperation against existing threats and risks."

The Turkish Armed Forces (TSK) issued a written statement on Oct. 9, declaring that Turkish forces crossed into Idlib, Syria, on Oct. 8, to reconnoiter as part of efforts to bring peace to the area.

The statement said the goals of the de-escalation zones, which were declared on Dec. 30, 2016, and guaranteed by Turkey, Russia and Iran through the Astana process, aim to increase the effectiveness of the ceasefire agreement, end armed clashes, provide humanitarian aid to those in need, establish proper conditions for displaced people to return and establish conditions for a peaceful resolution of the conflict.

It was reported in the Turkish media that the TSK would determine 14 spots in the area to establish security posts. Experts in the field are analyzing the feasibility of roads and terrain where armored vehicles and tanks are expected to roll in the upcoming period.

Experts are also trying to gauge the possibility of terrorist attacks against Turkish military elements and determine dangerous spots in a way only the Special Forces can understand.

Meanwhile, the PKK terrorist group's Syrian offshoot the Democratic Union Party (PYD)'s invitation to the Russia-backed Congress of Syrian peoples is "unacceptable," presidential spokesperson İbrahim Kalın said Wednesday. Speaking at a news conference at the Presidential Complex in Ankara, Kalın said it was impossible for Turkey to accept the invitation of the PYD and its armed wing, the People's Protection Units (YPG).

"We do not see any problems in inviting Kurds who are not from the PYD/YPG, but the PYD/YPG is a terrorist organization. We will not accept inclusion of a terrorist group into a platform like Astana [talks on Syria]," the presidential spokesperson said. According to Kalın, the problem was "mostly" solved, but Turkey will not welcome such initiatives in the future.

The congress is to be held in Russia's Black Sea resort of Sochi in mid-November, but Russia's Hmeymim Air Base in Syria might also be used, Alexander Lavrentyev, a senior Russian negotiator on Syria said Monday.

Such a congress would focus on seeking "compromise solutions toward the political settlement" of Syria's conflict, a Russian negotiator on Syria said earlier this week. However, Ankara remains adamant on not allowing the PYD to form a terrorist state in northern Syria.