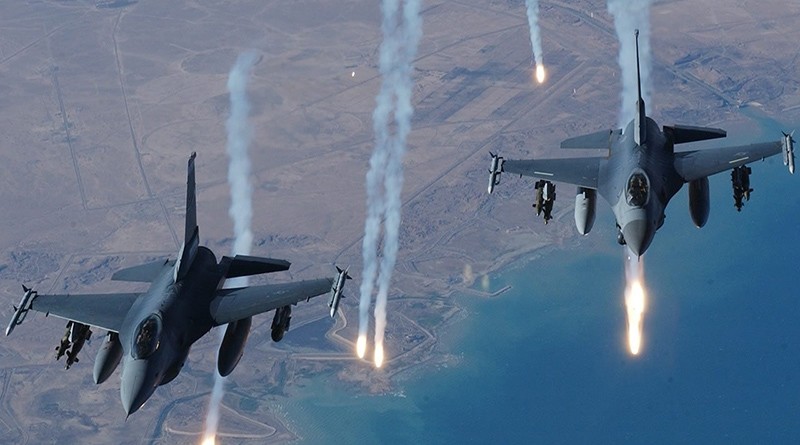 As the death toll in two days of PKK attacks rose to nine, President Erdoğan declared that Turkey would ‘wipe out' the terrorist group from Iraq and Syria ‘if those countries fail to do so'

A police officer was killed on Friday in a counterterror operation targeting the PKK hours before grieving families bid farewell to the flag-draped coffins of eight security personnel. Ankara, meanwhile, expressed firm determination to root out the terrorist group which is responsible for hundreds of deaths resulting from its bloody campaign concentrated in southeastern Turkey. In the most vivid display of outrage over the attacks that followed a relative silence in the PKK's terrorist campaign, President Recep Tayyip Erdoğan said Turkey may target the terrorist group in Iraq and Syria.

Ahmet Alp Taşdemir, a member of the National Police Department's elite Special Operations unit, was accompanying fellow officers who stormed a PKK hideout in the southeastern city of Diyarbakır Friday when he was shot. Nine others were wounded in the shootout between the militants and the police. Officials said the terrorist hiding out in the house was killed in the operations. They said the killing of Taşdemir and other casualties stemmed from the police's efforts to not harm the "human shields" in the house, one woman and three children. All four escaped uninjured. The militant, identified as Murat Çelik, was a member of the PKK's "youth wing" according to authorities.

Just as military officials were heading to the family home of Taşdemir in western Turkey, families in other parts of Turkey struggled with heavy hearts as they prepared their loved ones for funerals. The victims were six military personnel and two village guards, part of a paramilitary force fighting the terrorist group in eastern and southeastern Turkey. Two soldiers were buried later in their hometowns, while funerals and burials were underway for the remainder when Daily Sabah went to print.

They were killed when PKK militants attacked their unit in Şemdinli, on the border with Iraq, on Thursday. Authorities announced that 46 militants from the terrorist group were "neutralized" across three provinces, Hakkari where Şemdinli is located, Tunceli and Şırnak.

Turkey is determined to destroy all terrorist targets near its borders if the countries harboring the terrorists fail to do so, Erdoğan said Friday, as he pledged to wipe terrorists off the map in the Sinjar and Qandil regions of northern Iraq.

Speaking at a grand opening ceremony in Manisa province, Erdoğan said that Turkey is entitled to protect its citizens by taking action across the border against terrorists who receive training elsewhere and come back to carry out attacks in the country.

"Currently, many places in Iraq and Syria are nests for terrorists" Erdoğan said, adding that Turkey will not hesitate to strike them in the regions posing a direct threat to national security.

"No just state would let its soldiers, personnel work side by side with terrorists" Erdoğan said.

Thursday's incident was the first direct PKK attack on Turkish soldiers in months amid efficient operations and superior firepower in the countryside. The terrorist group frequently targets the military and police with bomb traps or suicide attacks, while kidnapping or murdering public servants and civilians.

Founded in 1978, the PKK has waged a decades-long bloody campaign against Turkey. The group, listed as a terrorist organization by Turkey, the U.S. and the European Union, resumed its armed campaign in July 2015 after a brief reconciliation period. Since that time, the PKK has been responsible for the deaths of some 1,200 security personnel and civilians, including women and children, while more than 4,000 security personnel and over 2,000 civilians have been injured. More than 12,000 PKK terrorists were also killed in the same period.

The Turkish military occasionally conducts operations in northern Iraq, a place ruled by the Kurdistan Regional Government (KRG) which recently voted for independence from greater Iraq.

The PKK found shelter in the mountainous Sinjar and Qandil regions. The predominantly Kurdish regions provided safe haven for the group, which claims to fight for Kurdish self-rule in Turkey's southeast