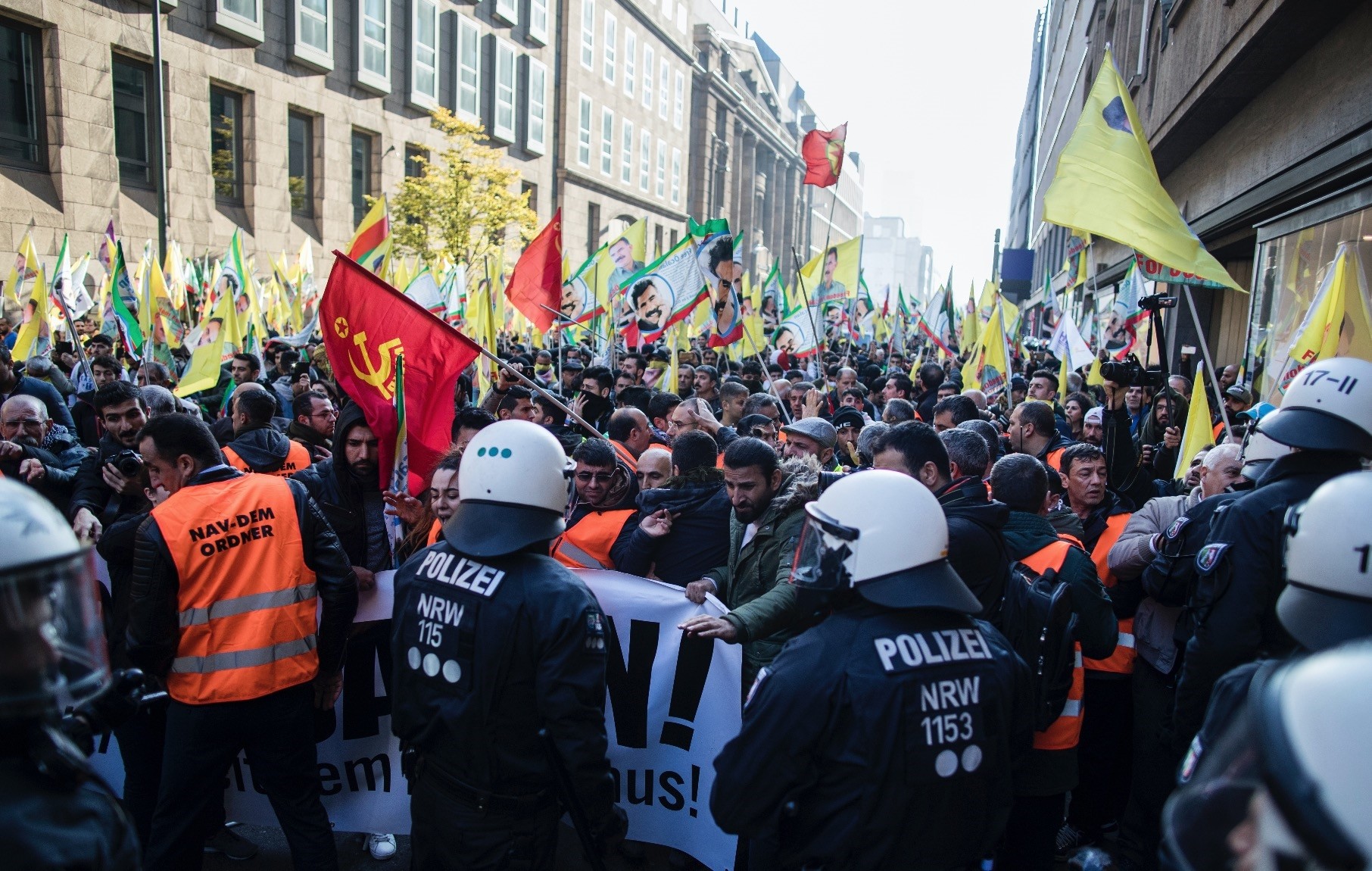 The German police's intervention in a PKK demonstration in Dusseldorf sparked a glimmer of hope in the Ankara, which has long criticized Berlin for its indifference over the EU-designated terrorist group's recruitment and financial activities in the country

Few in Ankara could have anticipated the clashes in the German city of Dusseldorf when thousands of PKK sympathizers poured to the streets on Saturday to demonstrate for the release of imprisoned PKK leader Abdullah Öcalan. However, things turned violent an hour into the protest.

After attacking the German police, according to German media outlets, several PKK sympathizers were detained, and many others were involved in clashes with law enforcement officers. Banned PKK and Öcalan banners and flags were waved at the scene, adding fuel to the tension as police officers intervened.

The scenes in Dusseldorf were met with mixed feelings in Ankara. Even though the demonstration for the release of the terrorist leader in Turkey was given the green light by German authorities, such an unexpected intervention against the supporters of the terrorist group sparked disbelief.

"Right to demonstrate, Yes, promoting PKK terrorism, No. #NRW [North Rhine-Westphalia] no longer tolerates infringement of the law. Thanks to consistent action of the police," said Armin Laschet, prime minister of the German state of North Rhein Westphalia, on his official Twitter account.

Furthermore, Cem Özdemir, co-chair of the Green Party and a notorious anti-Turkish government figure in Berlin, spoke out in favor of police action. "We all want human rights & Democracy for Kurds, but we have zero understanding of violence against police!" he also tweeted.

The unprecedented scenes in Dusseldorf followed the recent releases of two German nationals from prison in Turkey. The unique approach of the German police toward the banned PKK and Öcalan banners and flags led to questions about whether Berlin's PKK policy has shifted to a quasi rapprochement with Ankara.

That being said, Ankara remains prudent. Turkish presidential spokesman İbrahim Kalın said over the weekend that the intervention was "positive," yet "not enough." Kalın said, "The German government needs to take more steps on counterterrorism."

On the other hand, Mustafa Yeneroğlu, Istanbul deputy for the Justice and Development Party (AK Party), said the demonstration should not have been permitted in the first place. "It is nothing but a show to stop the terrorist group's demonstration due to banned rags. It should never have been allowed."

In spite of the unusual intervention of the German police against the PKK supporters and the extraordinary stance of the German politicians afterward, the Turkish side is being cautious about jumping to any conclusions regarding a policy shift in Berlin.

Yeneroğlu avoided glorifying the German government for the action. In response to a tweet posted by the Istanbul correspondent of the German state-run ARD channel, Oliver Mayer-Rüth, who argued that the intervention might be well received in Ankara, the AK Party deputy said: "Not so easy! Ankara expects consistent implementation of the PKK ban, namely the ban of its activities, not a ban of images!"

"It would be too optimistic," said Kemal İnat, an international relations professor at Sakarya University, "to believe that there has been a change." The professor said the historic low in bilateral relations would not have been reached had Berlin preferred to collaborate with Ankara on the fight against terrorism.

Emre Gönen, an international relations professor at Bilgi University, has a different point of view. He said it is a very healthy and positive step in restoring the ties. "Irrespective of the point of view, it is a positive development. It will make the bilateral ties easier. It is significant in making both sides stop blaming each other, if not anything."

Mutual ties have hit rock bottom on more than one occasion over the course of the last one-and-a-half years. The Armenian resolution in the German parliament last year, Berlin's arguable failure to support the democratically elected Turkish government in the face of the July 15 coup attempt, the ban on Turkish politicians prior to the April 16 referendum, the İncirlik Air Base crisis and sanctions on Turkey have poisoned bilateral relations to a great extent in a short period of time.

The Sakarya University academic is of the opinion that there are some concrete steps to be taken before a policy change could be seen in Berlin. "It is clear in the Bundesamt für Verfassungsschutz's [the German domestic intelligence agency] report that the PKK has offshoots operating in Germany. The terrorist group threatens people, racketeers and recruits youngsters to fight in Turkey," İnat said, adding that Ankara would swiftly feel the shift if Berlin was willing to put its foot down.The report, published last July, underscored that the terrorist group has some 14,000 supporters across Germany and collects around 25 million euros ($29 million) annually. "The PKK managed to double its revenues from donations in Germany within the last 10 years," it said.

Gönen also has another perspective with regard to the events. "Turkey's arguments were strong. Germany may have taken this step to strengthen their hand in bilateral meetings." Nonetheless, the Bilgi University professor said Saturday's police intervention marked "one of the most significant actions against the PKK across Europe."