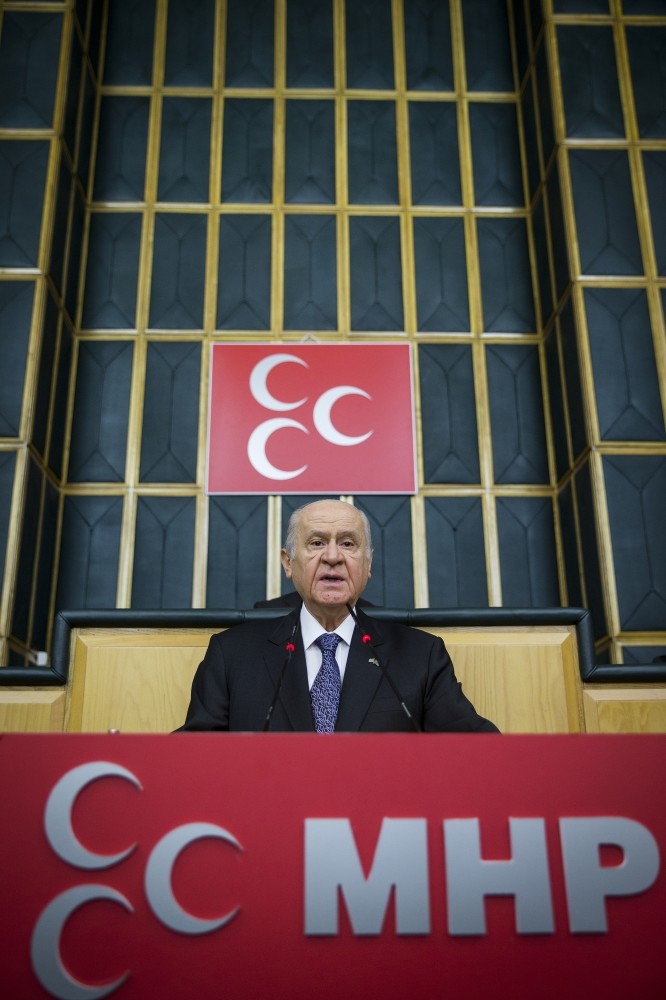 Chairman MHP Bahu00e7eli said that the U.S. and Europe are advocating for FETu00d6 and slammed both for turning a blind eye to criminals and terrorists.
by daily sabah
Nov 08, 2017 12:00 am

"You [the U.S.] are providing weapons to the PYD, the YPG [People's Protection Units] and the PKK and giving protection to terrorist leader Fetullah Gülen, who is responsible for the murder of 250 people, by allowing him to reside in Pennsylvania," Bahçeli said at his party's weekly parliamentary group meeting.

He went on to say that even though the U.S. declared war on terrorism after 9/11, it provides weapons to terrorists and harbors FETÖ members.

"Although the U.S. claims to see terrorism as a threat and has supposedly been fighting terrorism since 9/11, how can they account for American arms and weapons used by the PKK to murder our soldiers on Nov. 2?" Bahçeli asked about the PKK's use of American weapons.

"It must be asked what FETÖ members are actually doing in Pennsylvania," Bahçeli said. He claimed that the U.S. and Europe were advocating for FETÖ and slammed both for turning a blind eye to criminals and terrorists.

"Why did the U.S. not extradite Gülen, and why is it shutting its eyes to Turkey's demands? What message does their stance give?" Bahçeli asked, adding that working with terrorist organizations was completely unacceptable. He said Turkey could not trust a "frenemy."

Pointing out that external powers have long been targeting Turkey, he stressed that terrorist organizations like the PKK, Daesh, FETÖ and the Revolutionary People's Liberation Party-Front (DHKP-C) are all pawns in the anti-Turkey strategy.

"Those who use terrorism as a political tool will eventually be targeted by those terror organizations," he said, adding that Turkey will not succumb to political plots trying to debilitate its economy through defamation, terrorist acts or coup attempts.

Bahçeli said the MHP has suggested two possible solutions for the fight against terrorism.

The MHP leader went on to say that despite the fact that even the smallest event in the U.S. gets worldwide attention, the U.S. and western countries pay little heed to the events in Istanbul, Kirkuk or at any other cities for that matter.

"Crimes against humanity cannot be covered up by any malevolent and hostile power," he said.

Brushing off those who fuel ethnic and sectarian discrimination, Bahçeli said the Turkish nation always welcomes everyone without discrimination. He said no one in Turkey can claim that he or she was denied a place in Turkey's politics, trade, state administration, civil service or bureaucracy because of their language or ethnicity.