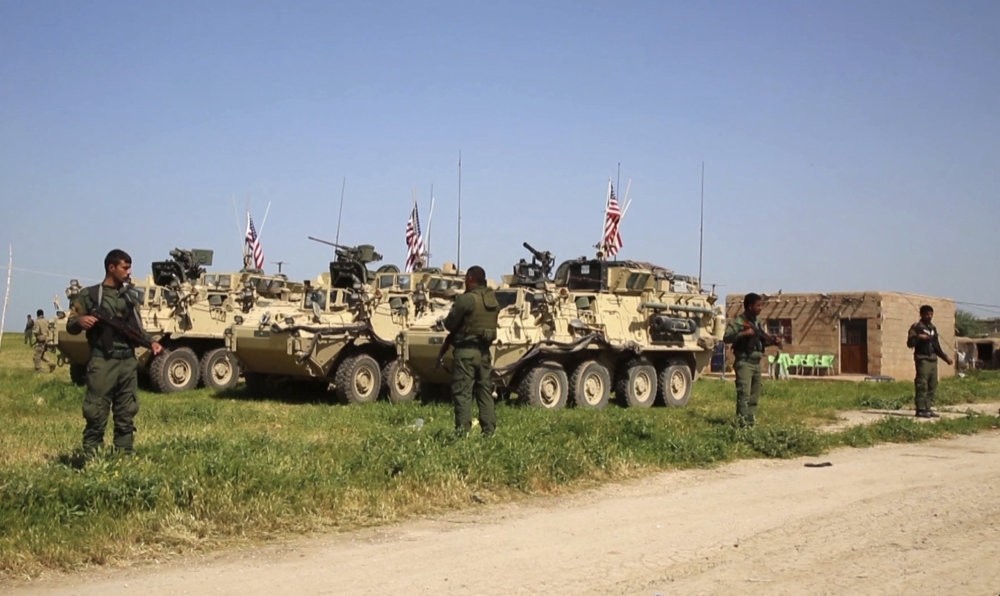 The YPG fighters stand guard as U.S. forces take up positions in the northern village of Darbasiyah, Syria , April 29.
by Mehmet Solmaz
Nov 10, 2017 12:00 am

Defense Minister Canikli said weapons given to PKK-linked groups in Syria has exceed 3,000 trucks, adding that he presented documents at a NATO meeting that show the PKK used those arms in their latest attacks on Turkish forces

Defense ministers of NATO countries who gathered for a two-day meeting in Brussels were given documents and images by Turkish officials showing the links between the People's Protection Units (YPG), a militant group dominated by the Syrian Democratic Forces (SDF), and the PKK, which killed six Turkish soldiers and two village guards last week with an anti-tank missile the U.S. gave to the SDF.

Speaking on the second day of the meeting at NATO headquarters yesterday, Defense Minister Nurettin Canikli said the weapons given to the SDF now exceed 3,000 trucks, and "this number does not match the necessity in the fight against Daesh."

Explaining that he has told all of his NATO counterparts about the danger caused by providing weapons to the SDF, Canikli said that since the fight against Daesh is over, there is no further explanation for the ongoing arming of a terrorist organization by a NATO ally.

Commenting on Turkey's "successful" fight against terrorism, the defense minister said the results show the rate of success.

Turkish intelligence officials and police recently discovered a secret tunnel from the Turkish border town of Nusaybin to Qamishli, Syria.

The governorate of Mardin where Nusaybin is located said that the National Intelligence Organization (MİT) and the local police were carrying out counterterrorism operations in the area and started combing the site on Oct. 31, upon information regarding a secret tunnel.

The tunnel was six meters underground and its entrance in Syrian was blocked. It was located in an empty lot, officials said, noting that they were examining "the workplace and residence" where the tunnel's entrance in Turkey is.

Continuous U.S. support for the YPG has stirred tensions between Washington and Ankara. Washington has insisted that the PKK, and the YPG which is the Democratic Union Party's (PYD) militia, are two different organizations and that supporting the YPG is the only option to defeat Daesh. Meanwhile, Ankara has argued that rather than supporting and arming a "terrorist group," an alternative could be found with local Arab tribes backed by other countries in the region.