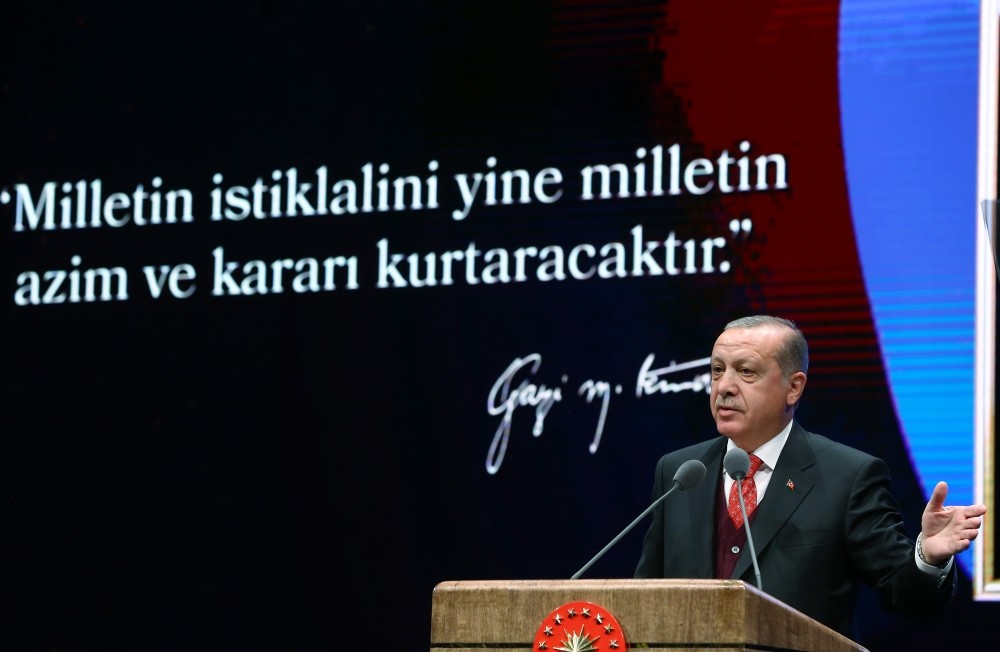 President Erdou011fan said Turkey has to do everything for its national and security interests, citing the Turkish military's ongoing cross-border activities in Syria.
by daily sabah
Nov 11, 2017 12:00 am

The Turkish military's cross-border operations in Syria are to eliminate terrorist groups that constitute threats to Turkey as in Idlib and Afrin in Syria, President Erdoğan has said

Turkey will continue to take all the necessary actions needed to eliminate terrorist threats wherever they may be, President Recep Tayyip Erdoğan said Friday, adding that the recent cross-border operations in Syria are also part of Ankara's efforts to secure Turkey's borders and national sovereignty.

"We do not have the luxury to say go ahead, if there are attacks and harassment originating from within the borders of the National Pact aimed at our country. We have the responsibility to implement the necessary measures. This is what we did in Operation Euphrates Shield and what we are doing right now in Idlib and Afrin," the president said in Ankara during the commemoration ceremony of the death of the founder of the Republic of Turkey, Mustafa Kemal Atatürk, referring to the set of decisions adopted by the Ottoman parliament in 1920 for peace conditions after the empire's defeat in World War I.

The National Pact sought self-determination for Turks in areas previously occupied or expected to be occupied by the Allies in a peace treaty, and demanded Mosul and Kirkuk in northern Iraq, northern Syria, Georgia's Batumi and western Thrace in Greece be included within the country's borders.

Erdoğan criticized the Western presence in Iraq and Syria, and said that it is Turkey's responsibility to protect the rights of its friends in the two countries along its southern borders.

Turkey's military began setting up observation posts in Idlib last month before establishing de-escalation zones to reduce clashes between the opposition groups and the regime. On May 4, the guarantor countries signed a deal in the Kazakh capital of Astana to establish de-escalation zones in Syria.

The May 4 de-escalation zone agreement envisages the halt of hostilities between Bashar Assad regime forces and moderate opposition groups within the zones, as well as the creation of conditions for humanitarian access, medical assistance, the return of displaced civilians to their homes and the restoration of damaged infrastructure.

After Idlib, military sources and Ankara have hinted at the possibility of an offensive in Afrin province, which is currently controlled by the Democratic Union Party (PYD).

The president had said in late October that Turkey's operation in Idlib was largely complete, adding: "Now it's time for Afrin."

"As I have said before, we can hit [Afrin] at any moment."

In addition to Daesh, Turkey also sees the presence of the PYD and its armed People's Protection Units (YPG) a threat to its national security. The PYD and YPG are the Syrian affiliate of the PKK terrorist group, which is listed as such by the United States, EU and Turkey. Ankara also considers the YPG to be terrorist group, while the U.S. does not and supports the YPG under the umbrella of the Syrian Democratic Forces (SDF), claiming that they are the most effective partners in the fight against Daesh.

Washington's support for the PYD and YPG has angered Ankara, which says one terrorist group cannot be eliminated by another, criticizing the U.S. administration's military support of the group, arguing that the arms support given to the YPG ultimately ends up in the hands of PKK terrorists and are used against Turkey. As an alternative, the fight against Daesh should be carried out with local forces backed by countries in the region, and the demographic sensitivities of the region should be kept in mind, Ankara says.

The YPG's ultimate aim is to establish autonomous cantons from northwestern Afrin to Kobani and Jazeera in the northeast. Moderate opposition groups oppose this, arguing that it would threaten Syria's territorial integrity.

The president also said that Turkey will continue its operations against the PKK in the southeastern part of the country.

Meanwhile, U.S.-backed YPG have started to transfer a high number of weapons to Afrin following the defeat of Daesh to a large extent, the Yeni Şafak daily reported on Friday.

According to the report, the Pentagon said 96 percent of Deash in Syria has been eliminated. The report added that the Pentagon has begun to dispatch ammunition to the YPG in Afrin.

In August 2016, following a series of attacks by the Daesh terrorist group in Syrian provinces along Turkey's border, Turkey launched Operation Euphrates Shield as a cross-border offensive and cleared the border from the Daesh presence. In March 2017, the operation ended and the Syrian towns of Jarablus, al-Rai, Dabiq and al-Bab were cleared of the terrorist group.