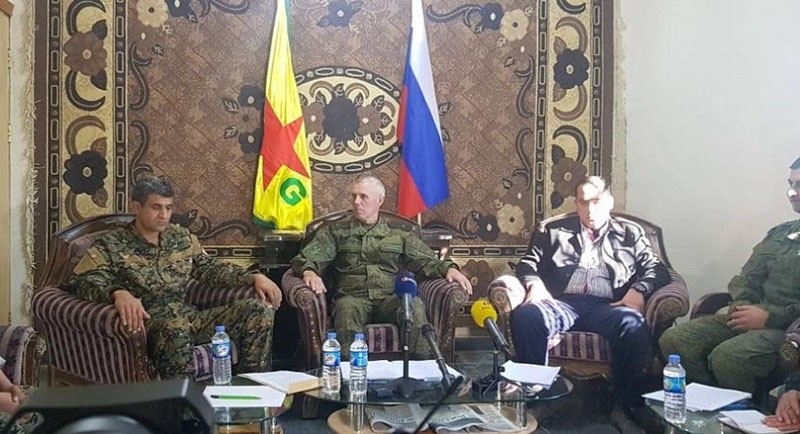 PKK terror organization's Syrian affiliate group on Sunday announced it had fully captured Deir el-Zour's eastern countryside from Daesh terrorists with the help of both the U.S.-led coalition and Russia.

The announcement was made Sunday through a statement read by the People's Protection Units (YPG) spokesperson Noureddine Mahmoud, the armed wing of Democratic Union Party (PYD), in the presence of a Russian Gen. Alexei Kim from Hmeimeem military base in Syria, in front of YPG and Russian flags in the background.

The U.S.-led coalition and Russian forces in Syria provided "air and logistical support, advice and coordination on the ground," the YPG statement also said. "We hope for an increase in this support and for ensuring the necessary air cover."

Mahmoud also praised the role tribal leaders played in the fight against Daesh in the oil-rich Deir el-Zour province, where tribesmen play an integral role in consolidating power there.

Although no official statements were released, Turkish foreign ministry sources told Daily Sabah yesterday that the issue will be discussed with the Russian counterparts.

The YPG terrorists have been backed by the U.S. under the pretext of fight against Daesh in Syria, functioning under the umbrella group Syrian Democratic Forces (SDF). SDF is predominantly led by the YPG terrorists. The SDF offensive in Deir el-Zour province, which borders Iraq, has focused on territory east of the Euphrates River.

On the western bank, Assad regime forces have waged their own offensive against Daesh with support from Iran-backed militias and Russia.

The separate assaults advanced from opposite sides of the river, which bisects oil-rich Deir el-Zour, mostly staying out of each other's way. The U.S.-led coalition and the Russian military have held de-confliction meetings - to prevent clashes between planes and troops - though the two offensives have sometimes come into conflict.

The U.S. support to YPG has become a critical issue of disagreement between Washington and Ankara, both of which list the PKK as a terror group, while Ankara argues that the military support to the YPG is eventually transferred to the PKK and used against Turkey. Turkey, Russia and Iran, however, have been in close cooperation over reaching de-escalation zones in Syria through intense meetings in Kazakhstan's capital Astana and also recently in trilateral cooperation in Russian city of Sochi. Russia's support to the YPG in Deir el-Zour is expected to irk Ankara. Turkish-Russian ties were severely strained in Nov. 2015 after a Russian jet was downed by Turkish air forces, however they have been fully recovered through diplomacy and frequent meetings between President Recep Tayyip Erdoğan and Russian President Vladimir Putin.

Recently, Moscow had invited the PYD to Syrian National Dialogue Congress, however, the meeting was later postponed when faced with strong criticism from Ankara and moderate Syrian opposition.

On Sunday, Erdoğan said the PKK's Syrian offshoot, the Democratic Union Party (PYD) does not care about the well-being or future of the Kurdish people in Syria.

Addressing the ruling Justice and Development (AK) Party members in the eastern province of Ağrı, Erdoğan said the terrorist group was being used as a "pawn" by some states and powers.

"Do you believe that PYD in Syria is working for the benefit and future of our Kurdish brothers?" Erdoğan asked. "Never. This is not the case."

He said he has always spoken out against the abuse of Kurdish people's rights by Bashar al-Assad's regime.

"I asked him, back in the days when we were on good terms, why they did not give them [Kurds] identity cards or passports. But Assad never cared about them."

"Whoever established Daesh and armed them, and wreaked carnage in the country [Syria], is now arming and controlling and guiding PYD," he said, in an indirect reference to the U.S.

Since the start of Syria's conflict in 2011, the YPG has seized a large amount of territory in northern Syria with its aim of establishing an autonomous regions. The terrorist group now controls around a quarter of Syria, the largest part outside government control. Ankara says that the establishment of a 'terror corridor' along its southern border is a national security threat and that it will not allow it to happen.

Meanwhile, the PYD also faces criticism from Syrian opposition groups and Ankara for committing severe rights violations against Turkmen and Arab populations of areas captured from Daesh, which include forced relocation and arbitrary arrests.

There are 11 major oilfields in Deir el-Zour area, which the Daesh terrorist group withdrew earlier without any shots fired.

On Sept. 9 YPG began advancing some 56 kilometers into Deir el-Zour without encountering any resistance from Daesh.

The PYD's main area of operations includes oilfields located in Deir el-Zour east of the Euphrates River near the border with Iraq.

Syria's main oilfields are located east of the Euphrates, the largest of which is the Al-Omar oilfield.

The Al-Omar, Tanak, Ward, Afra, Kewari, Jafra, Jarnuf, Azrak, Kahar, Sueytat and Galban fields are all located east of the river. These are estimated to account for roughly one third of Syria's total energy production.