Washington wavers on YPG support as Turkey piles up pressure 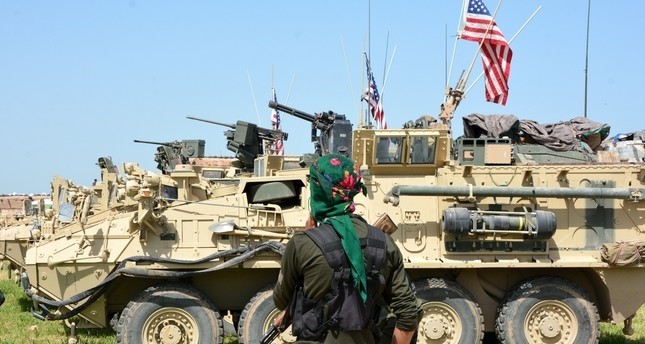 YPG terrorists stand next to U.S. eight-wheeled armored vehicles, near al-Ghanamya, al-Darbasiyah at the Syrian-Turkish border, April 29.
by Daily Sabah with AA Dec 04, 2017 12:00 am

Recent comments by U.S. Defense Minister James Mattis suggesting that weapons deliveries to the YPG will cease, but their cooperation will continue as the terrorist group's militants will become local police forces, epitomizes Washington's inconsistent strategy on the PKK-affiliated groups in Syria

U.S. officials continue to indicate that arms support to PKK-affiliated groups in Syria will be over, though their support will continue for now, while Turkey piles the pressure on Washington and has warned several times of a possible operation in northern Syria against areas held by the PKK's Syrian offshoot, the Democratic Union Party (PYD, and its armed People's Protection Units (YPG).

U.S. Secretary of Defense Jim Mattis on Friday said that the Pentagon's weaponry support to the YPG, which is regarded as one of the main sources of strained relations between the two NATO allies, would cease as President Trump announced, but added the focus would move towards holding territory and thus YPG militants could become local police force.

"The YPG is armed and as the coalition stops offensive then obviously you don't need that, you need security, you need police forces, that is local forces, that is people who make certain that [Daesh] doesn't come back," Mattis said.

Mattis also confirmed that arming the YPG will stop in accordance with the telephone conversation between President Recep Tayyip Erdoğan and President Trump last week. "Yeah, we are going to go exactly along the lines of what the president announced," Mattis told reporters on a military plane en route to Cairo, in response to a question about whether the U.S. would stop arming the YPG.Trump and Erdoğan spoke over the phone last week to discuss the recently concluded Sochi summit, the Syria crisis and bilateral ties. During their conversation, Trump told Erdoğan that Washington would not give the YPG terror group weapons anymore.

However, the Pentagon later said the U.S. was merely "reviewing pending adjustments to the military support provided to our Kurdish partners." Media outlets reported that the Pentagon sent 100 armored vehicles to YPG-controlled areas in northern Syria after the Trump-Erdoğan phone call.

Foreign Minister Mevlüt Çavuşoğlu said earlier this week that the inconsistency between the Pentagon and Trump's remarks on providing military support to the YPG in Syria raises concerns for Ankara. Also, Prime Minister Binali Yıldırım said Tuesday that Trump's statements on weapons deliveries to PKK-affiliated groups in Syria are binding for Turkey, rather than other institutions that make statements contradicting his pledges; referring to the conflicting statements between Trump and the Pentagon on the issue in recent remarks.

Meanwhile, the YPG has stored weapons given to them by the United States Central Command (CENTCOM) for the fight against Daesh in Syria at its 13 main bases in areas they seized and control in the region, Anadolu Agency reported on Friday. It has identified armories and shipping routes established by the terrorist organization in northern Syria from information they retrieved from reliable local sources in PYD-occupied territories and open sources.

The YPG is the armed wing of the Democratic Union Party (PYD), the Syrian offshoot of the PKK, which is designated as a terrorist group by Turkey, the U.S. and the EU. More than 40,000 people have been killed in the PKK's over three-decade terrorist campaign against the Turkish state.