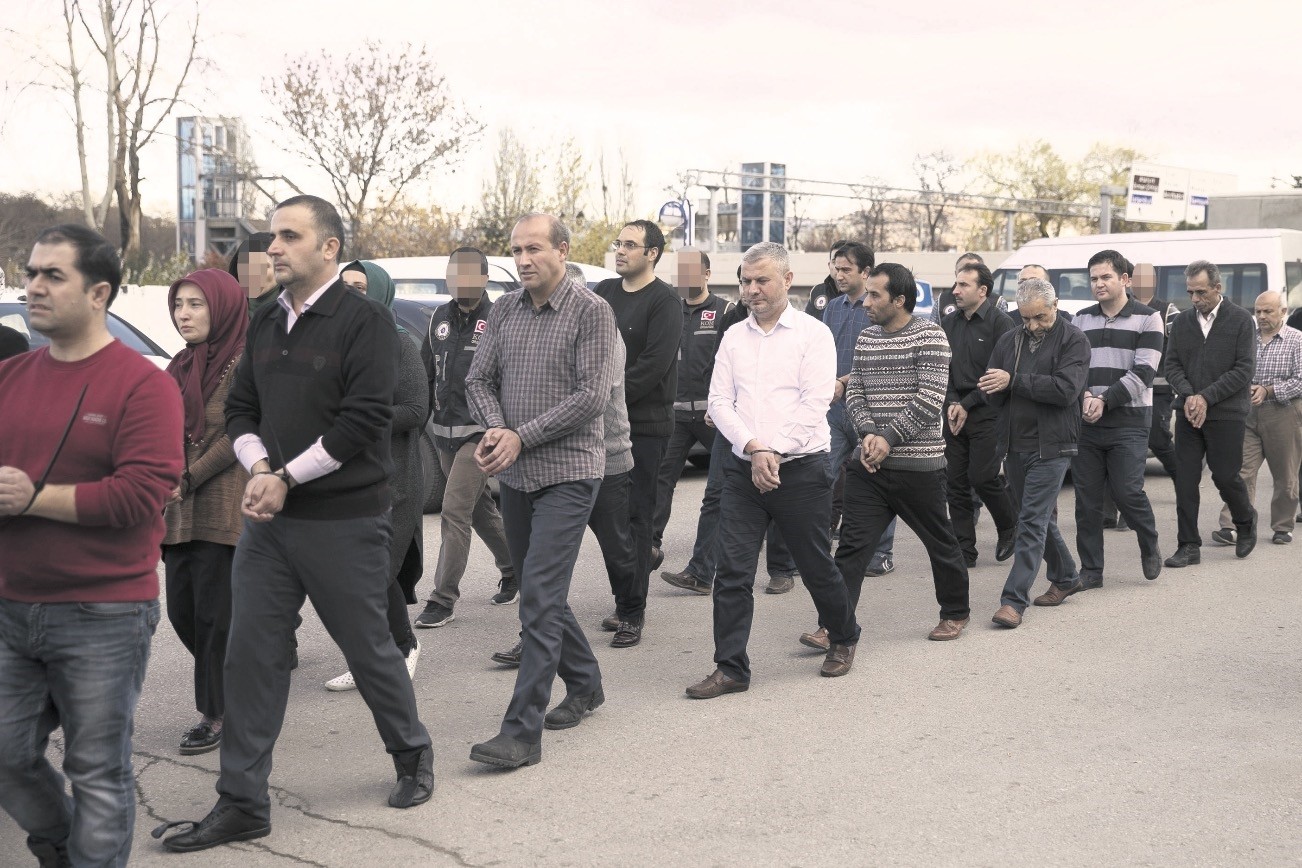 Police escort suspects to police headquarters in Ankara. The suspects were captured in the capital, Istanbul and two other cities.
by Daily Sabah Dec 06, 2017 12:00 am

In Thursday's operations against FETÖ, blamed for the 2016 coup attempt, 60 people including its leader Fetullah Gülen's nephew, were captured in a ‘gaybubet,' the term the group gives to its hideouts

At least 60 people were arrested Wednesday in the Turkish capital Ankara for links to the Gülenist Terror Group (FETÖ), which is accused of carrying out the July 15, 2016 coup attempt that killed 249 people.

The arrests came after prosecutors in Ankara issued warrants for 97 suspected members of the group. During the operations, Ankara's anti-terror branch units raided 65 different locations across the city as well as residences in Afyonkarahisar, Kırıkkale and Istanbul, which were said to be used as hideouts to carry out organizational activities and hold secret meetings. The hideouts are called "gaybubet," or absence in FETÖ jargon, and they were mainly used by the group to hide its followers who are being sought for several crimes since 2013, the year when its infiltrators in the police and judiciary sought to seize power in two disguised coup attempts targeting the government.

Selman Gülen, a nephew of the group's U.S.-based leader Fetullah Gülen, and some fugitive senior members - so-called "imams" - are among the detainees. The operations were underway to capture the other suspects when Daily Sabah went to print.

Separately, 23 people were remanded in custody yesterday across Turkey over alleged links to FETÖ.

The arrests were conducted in 26 provinces across Turkey, and all suspects are accused of using the ByLock smartphone app. ByLock is an encrypted messaging app exclusively used by FETÖ members.

The Diyarbakır court released 42 people, 37 of whom are under judicial supervision. Another suspect is still wanted.

FETÖ is accused of masterminding the July 15 coup attempt last year through its infiltrators in the military. The terrorist group, which posed as the religious "Hizmet" (Service) Movement for decades, had moved to seize power in multiple coup attempts over the past four years when the government moved to curb its widespread clout in Turkey. Since then, a string of investigations disclosed that Gülenists were involved in a wide array of crimes, from money laundering to orchestrating sham trials to imprisoning critics and conspiring against anyone opposing FETÖ.

FETÖ is accused of planting its members in the police, judiciary, army, and bureaucracy. Disguising their ties to the group, followers managed to rise to the top ranks. They became generals in the army and senior police chiefs. Through "imams," FETÖ monitored the infiltrators and gave them orders. Imams are often unassuming figures, such as a shopkeeper in a small town or a teacher, but they held immense power within the group, commanding police chiefs, generals and high-ranking bureaucrats.

Thousands were detained or arrested in a post-coup crackdown against FETÖ while thousands of others were dismissed from their public sector jobs. Coup trials are underway across Turkey and several military officers were sentenced to life for their role in the insurrection bid.