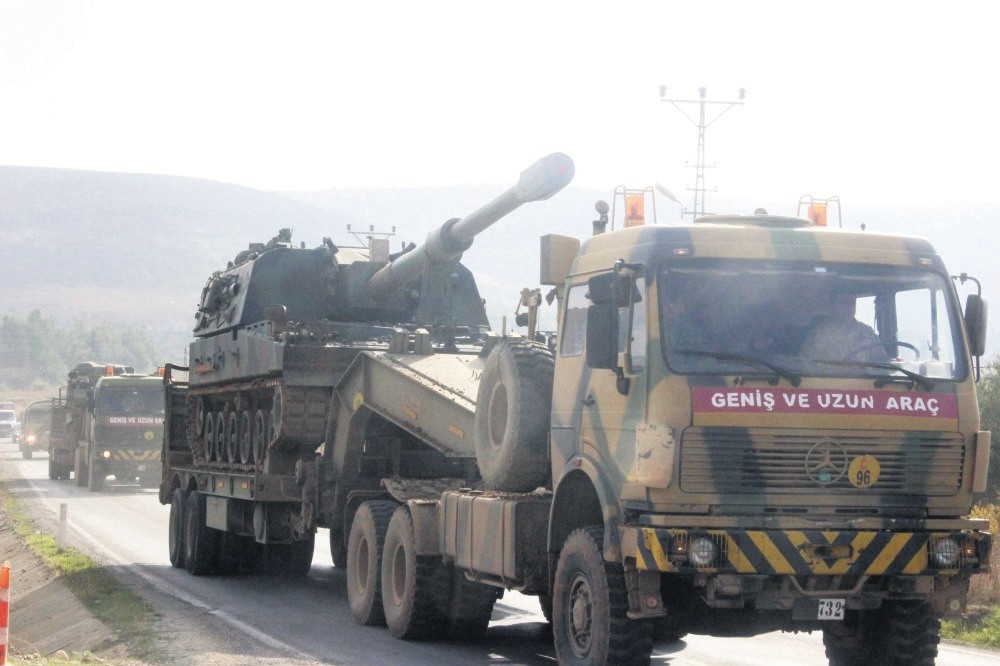 An operation on Afrin by the Turkish security forces will ensure the elimination of threats posed to Turkey's national security by the PKK terror group's Syria affiliate while it will also help establish a secure region for Syrians to return home, experts have said. "We will not allow nesting of terrorists alongside our borders," President Recep Tayyip Erdoğan said on Sunday and added that the terrorists will be eliminated from the Syria's Afrin and other regions, referring mainly to the PKK and its Syrian affiliate, Democratic Union Party (PYD) and its armed wing People's Protection Units (YPG), as well as Daesh terrorists.

Following the terrorist group YPG's taking control of Afrin earlier last year, the city is now considered one of the major strongholds of the PKK. The terrorists in Afrin have occasionally carried out cross-border attacks against the Turkish military, despite the presence of American and Russian military experts in the area. Ankara has voiced that the Turkish security forces are ready to clear PKK affiliates from Afrin in an offensive which may be launched soon. Can Acun, a Middle East expert, said with a possible operation to Afrin, Turkey aims to both maintain its national security and clear the region of terrorists, such as the YPG and Daesh.

The YPG is considered as a terror group by Turkey due to its links to the PKK, while the U.S. sees the YPG as an effective partner against Daesh in Syria. The U.S. has heavily supported the YPG militarily, a move that has also put a strong dent to Turkey-U.S. relations.

Once Afrin is cleared off PKK terrorists, a group considered as a terror organization by the U.S., the U.K, and the EU, one of the main objectives of an offensive on Afrin would be to create a zone that would enable the return of Syrian refugees to their homeland, said Bora Bayraktar from İstanbul Kültür University, adding that this would also ensure protecting the demographic sensitivities in the region.

Acun also underlined that Turkey's Syria policy has been one that is human-centered, as it was seen in the areas cleared off Daesh after the Operation Euphrates Shield. The Operation Euphrates Shield, launched on Aug. 24 last year and ended on March 29, cleared more than 2,000 square kilometers area from Daesh terrorists in towns of Jarablus, al-Rai, Dabiq and al-Bab, securing the regions for thousands of refugees to return to their home towns.

Turkey's possible operation on Afrin may also cause further tensions between Ankara and Washington.

Stressing that the U.S. continue its military support to the PYD failing to keep its promises, Bayraktar said the issue will remain as a significant problem between Turkey and the U.S. In relation to the issue, Chief of Staff Hulusi Akar has reiterated Turkey's line regarding the threat of PYD in a meeting with the high level commanders from the U.S. last week.

Meanwhile, a recent report by the RAND Corporation, titled U.S. Strategic Interests in the Middle East and Implications for the Army, has also drawn attention to a possible clash between the U.S. and Turkish forces, if Turkey launches an offensive against the YPG. The RAND report suggest that if the PYD calls for help from Washington, the U.S. military may be called upon, a move, which the report says is "not very likely," but adds that it is "not out of question."

The preparations for the possible offensive have been accelerated along the Afrin-Idlib border with the recent remarks of President Erdoğan. The building of three security points has been completed for the deployment of armored forces. Nine more security points are expected to be built in the regions considered significant.

Turkey is currently in Syria's Idlib province, bordering with YPG-held Afrin region, as part of an agreement reached in a tripartite consensus between Turkey, Russia and Iran, to establish de-escalation zones in Syria. The three guarantor states, as well as representatives of the Assad regime and some opposition factions, have met in Kazakhstan's Astana in a series of meetings aiming at ending the six-year conflict. The leaders of the tripatriate group has also held meeting in Russian city of Sochi to accelerate efforts to establish a permanent solution to the Syrian crisis.

Ankara also opposes seeing YPG/PYD as a legitimate actor to represent the Kurds in Syria. Commenting on the issue, Foreign Minister Çavuşoğlu said recently that the YPG represents a small component of Kurds and was preventing the Syrian Kurds to return to their homeland.

"The YPG represents only a small part of Kurds. As you know, there is Syrian National Coalition and the Kurdish National Coalition. There are other Kurdish groups as well in the region and in Europe. We are already in touch with all of these groups. We are not against our Kurdish brothers, on the contrary, we are always beside them. We are only against terrorist groups," the minister said, adding that they have made a list of Kurdish groups that could represent Kurds and forwarded it to Russia. PYD and its armed wing YPG have also been criticized by the international rights groups for violations of human rights, particularly against the Arab, Turkmen groups, as well as the Kurds who do not agree with PYD's political ideology. The violations by PYD has included arbitrary arrests, as well as forced migration of Arab and Turkmens in areas captured from Daesh terrorists.