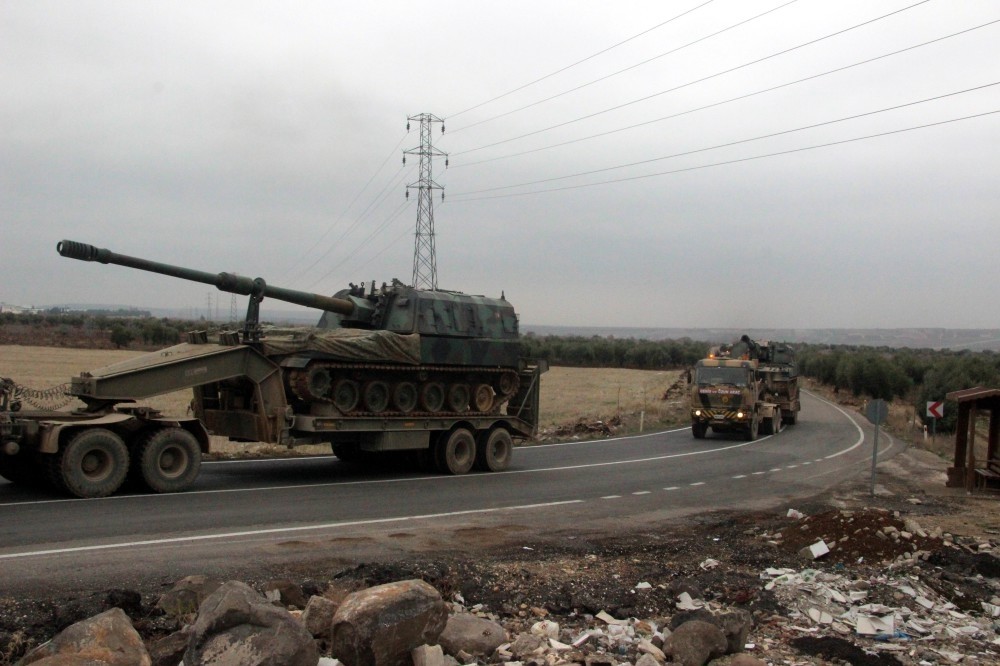 Howitzers being transported to Kilis province near the Syrian border.
by Daily Sabah Jan 18, 2018 12:00 am

The Turkish Armed Forces (TSK) and the Free Syrian Army (FSA) have been carrying out their final preparations and drills near the Syrian border ahead of an expected offensive into the Afrin district. A small number of civilians have reportedly started to leave Afrin to FSA-held regions in light of the expected maneuver by Ankara, according to information obtained by Anadolu Agency (AA) from local sources. The possible operation came from Ankara's persistence to sweep its borders and be rid of PKK-affiliated terrorist groups in Syrian offshoots, the Democratic Union Party (PYD) and the People's Protection Units (YPG). Washington's failed promises to cease its support to the YPG have also compelled Ankara to take its own action.

Families in the Afrin region were seen taking what they could with them and leaving the district in vehicles Tuesday evening. Dozens of vehicles were seen exiting the district and heading to the FSA-held Azaz district and north of the Aleppo city center, an area controlled by the Assad regime. According to a security source quoted by the AA, the YPG is planning to use local people as human shields during a possible Turkish Army operation in Afrin.

Also, some Daesh terrorists who were involved with the YPG/PKK have arrived in the city, the AA report said. The terror group has started to force some youth in the city to take up arms and dig trenches in their homes. They also collected money from the local people.

Afrin emerged as a hideout for the PKK/PYD in 2011, when anti-regime movements started in Syria, followed by the current civil war.

In time, the terrorist group in Afrin gained power with support from the Assad regime, along with U.S. backing east of the Euphrates River. The terrorist group, growing rapidly with U.S. military support, has seized 65 percent of the area of the Turkish-Syrian border.

The military support which the U.S. has sent to the northern Syrian city of Hasakah since April 2016 has also been sent to Afrin by the terror organization.On Sunday, Ryan Dillon, a spokesperson for the U.S.-led coalition against Daesh, announced plans to establish a 30,000-strong border "security force" in Syria with the Syrian Democratic Forces (SDF), led by the YPG.

President Recep Tayyip Erdoğan, who has long been signaling the operation, said on Monday, "It is our duty to choke this terrorist army before it is born," following the recent controversial move by Washington to form the security force in northern Syria.The PYD/PKK has mounted its pressure on civilians in Afrin, according to reputable local sources, who asked AA not to be named due to security concerns.

Syria's Kurdish National Council said yesterday that the U.S.'s plan to form a security force in Syria could trigger a dispute between the Kurds and Arabs.

Speaking to Anadolu Agency, İbrahim Biro, a leading member of the council, said that the U.S.'s plan would make the Kurds invaders.

"The plan can trigger another conflict between the Kurds and the Arabs there. There is no Kurdish population around the Euphrates River," Biro noted, adding the U.S. supported the PYD/PKK in order to keep it away from Russia and Iran.

He also said they informed the U.S that the PYD was an offshoot of the PKK, but Washington has been propagating that the PYD is different from the PKK.

Late Tuesday, Foreign Minister Mevlüt Çavuşoğlu said that Turkey may expand its operations in northern Syria to Manbij city and east of the Euphrates River after Afrin has been cleared. He spoke to reporters after meeting with his U.S. counterpart Rex Tillerson in Vancouver, Canada, where he was attending the Vancouver Foreign Ministers' Meeting on Security and Stability on the Korean Peninsula.

"Turkey's precautions against the YPG/PKK cannot be limited to Afrin alone. There is also Manbij and east of the Euphrates River," Çavuşoğlu said, adding that the U.S.'s plan to establish a border guard in northwest Syria "irreversibly harms U.S.-Turkey ties."

Turkish security forces stationed in the Reyhanlı and Kırıkhan districts of Turkey's southern Hatay province started to hit several PYD targets in the Afrin district on Saturday. The TSK fired at least 36 times during an artillery bombardment on Afrin's Bosoufane, Cindirese, Deir Bellout and Rajo districts.Çavuşoğlu said different opinions among the Pentagon and Centcom as well as different institutions and ministries in the U.S. regarding support for the SDF and the PYD/PKK have been causing the problem.

Noting past U.S. behavior regarding Manbij and Raqqa and its support of the PYD/PKK, Çavuşoğlu urged the U.S. to fulfill its promises.

"The promises made on Manbij and Raqqa have not been kept," he said, referring to a promise by the U.S. that local councils would run the cities after they were liberated, but the PYD/PKK took control. "In the same way, the promises about the steps that need to be taken after [the liberation of] Raqqa have also not been kept."

"The U.S. has previously stated that the PYD/PKK was not their strategic partner, [that] in fact, they were only working together to defeat Daesh. As we can see, we have so many reasons to be skeptical, and we have enough reasons to take our own precautions," he noted, urging the U.S. to stop supporting the group and to retrieve its weapons as Washington promised.

Since the mid-1980s, the PKK has waged a wide-ranging terror campaign against the Turkish state in which an estimated 40,000 people have been killed. It has been designated a terrorist organization by Turkey, the U.S. and the EU. However, the U.S. has been regarding the PKK-affiliated groups as reliable partners in Syria and overlooking Ankara's objections, which has plummeted relations to a historic low.