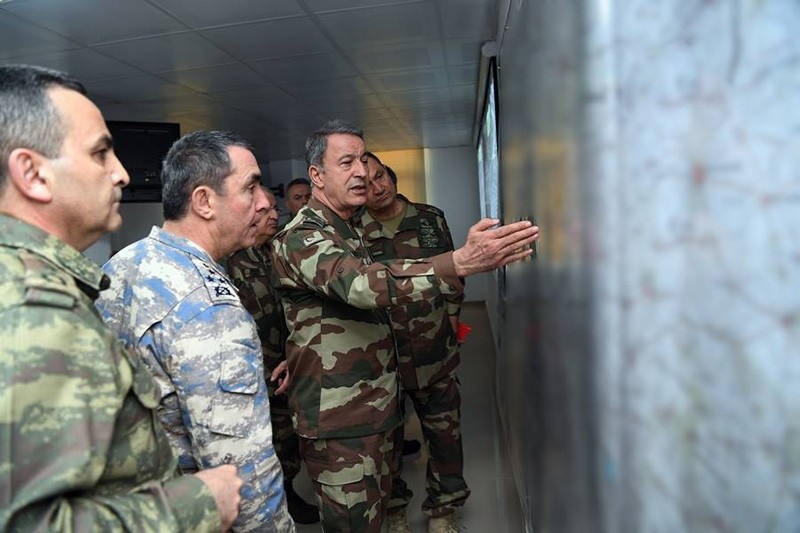 Turkish Chief of Staff Gen. Hulusi Akar on Sunday addressed the generals on strategies for Operation Olive Branch on Syria's Afrin as the Turkish operation entered its second day with advancements on positions held by the YPG.

Speaking to Second Army Commander Metin Temel and other commanders in the unit, Akar counseled strategic action to neutralize terror threats of PKK-linked (Democratic Union Party) PYD and People's Protection Units (YPG) as well as Daesh terror groups in line with the "Legitimate Defense Act" in the 51st article of the U.N. Convention and the resolutions of the U.N. Security Council against terrorism.

Akar also urged precautions be taken to prevent civilian casualties in the operation.

Turkey on Saturday launched Operation Olive Branch to remove PKK-linked and Daesh terror groups from Afrin. YPG and PYD are the Syrian offshoots of the PKK terror group, which has been designated a terrorist organization by Turkey, the U.S. and the EU.

On the first day of the offensive, 72 Turkish warplanes reportedly conducted airstrikes on Afrin, ahead of the move by the ground forces, which crossed into Syria on Sunday from Turkey's border province of Kilis.

Prime Minister Binali Yıldırım said the aim of the operation is to create a 30-kilometer-deep safe zone in the region to ensure Turkey's national security and that the operation would be conducted in four phases, with Afrin offensive being the first leg.