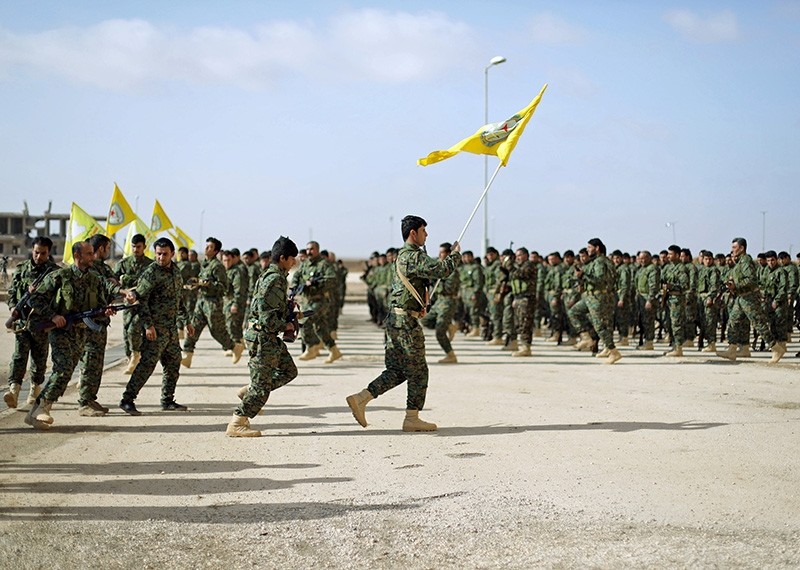 Fighters from a new border security force under the command of terrorist PKK-linked YPG dominated SDF hold flags during a graduation ceremony in Hasaka, Syria, Jan. 20, 2018 (Reuters Photo)
by Ragıp Soylu Jan 22, 2018 12:00 am

Pentagon said it wasn't a Syria border force, the U.S.-led coalition told media it wasn't an army, U.S. Secretary of State Rex Tillerson went even further, describing the whole situation was mis-portrayed, accusing his colleagues of misspeaking. Yet two separate on the ground reporters in northern Syria dismissed these statements and declared that the U.S. had been indeed training a border force consists of Syrian Democratic Forces, or known as (SDF). The U.S.-designated terror group PKK's Syrian offshoot People's Protection Units (YPG) is the leading force in the SDF.

Three days after the Pentagon walked back from its original announcement of a border security force in northern Syria, Aymann Al- Tamimi, a prominent Daesh and Syria expert, reported on his personal blog that he attended the graduation ceremony of the now supposedly non-existent border guards.

"Today at 10 a.m. local time in the vicinity of the Sabah al-Khayr silos in the Hasakah countryside (to the south of Hasakah city), I attended the graduation of the second contingent of the SDF border forces." he wrote on his personal blog dated Jan. 20.

Contrary to U.S. statements, the announcer declared in the presence of American soldiers that this force would be a foundational force to protect the borders of northern Syria, and he promised that similar training would continue, according to Tamimi, who also posted the pictures from the ceremony on his personal website.

His observation suggests there were approximately 250 graduates, "plurality if not majority" from YPG-dominated Kurdish areas, to be deployed between Kobani and Tal Abyad along the border with Turkey.

Later in the day, a correspondent associated with newswire Agence France Presse, also known as AFP, who was present at the ceremony confirmed the account with a news story.

"This is the second (graduating) class of the Border Security Force. They're made up of every demographic in the area. "Their mission is to protect the border, especially threats by Turkey and its mercenaries because we're being threatened," said Kani Ahmad, who headed the training, according to AFP. The first class graduated on Friday. This report puts the number of second trainees up to 500.

Based on these reports, Daily Sabah has made several inquiries with the U.S. State Department, the Pentagon and the U.S.-led coalition for an explanation. All of them sent similar statements, despite the evidence denying the existence of plans to establish a 30,000 strong border force, which was ironically announced by the coalition on Jan. 13 in an email in the first place. All of them underlying how the U.S. was mindful about the Turkish security concerns in Syria with regard to PKK and the training provided to the partner forces on the ground.

"The U.S. is building and strengthening partner-force capabilities to guard previously-cleared areas and to preclude ISIS freedom of movement. These local security forces are focused on preventing the potential outflow of fleeing ISIS terrorists as their physical 'caliphate' in Syria nears its end and the political process surrounding the civil war in Syria takes shape. The U.S. training is internally-focused on stability and deterring ISIS," Pentagon Spokesman Maj. Adrian Rankine-Galloway said in an email on Sunday, using a different acronym for Daesh.

Turkish officials previously complained to the media about the countless unfulfilled American promises and misleading U.S. statements on Syria, from YPG presence in Manbij to creation of a secure zone for the opposition. Officials also said the scope of the border force was the same despite the U.S. assurances that there wouldn't be such force.