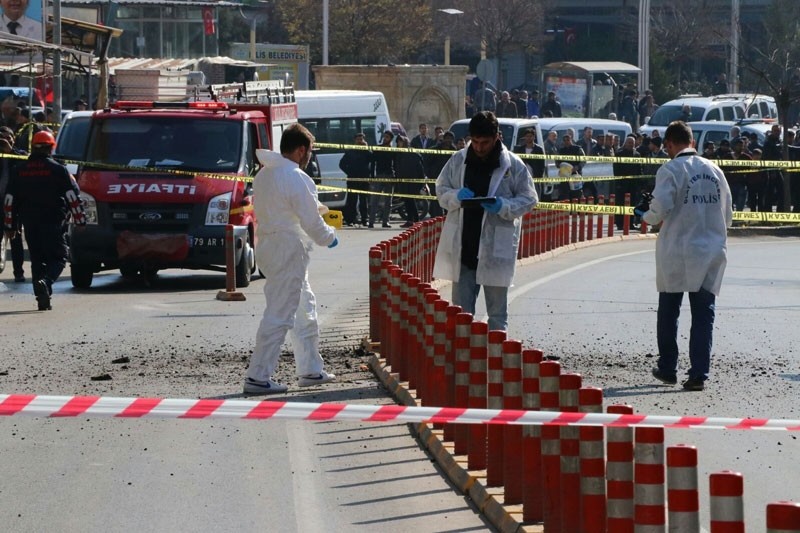 Two civilians were killed and 19 others were injured after the PKK-affiliated People's Protection Units (YPG) fired nine rockets from Syria's Afrin which landed in the city center of Turkey's southern Kilis province and Hatay province's Reyhanlı district on Friday.

In Reyhanlı district, two civilians, 68-year-old Rıfat Sinirli and Ahmet Şanverdi were killed and 16 others were injured after three rockets hit the industrial site.

The city was also targeted in YPG rocket attacks on Thursday, wounding at least five people, luckily none with life threatening injuries.

Since the beginning of Turkey's Operation Olive Branch to clear PKK/KCK/PYD/YPG and Daesh terrorists from northwestern Syria's Afrin, terrorists have indiscriminately targeted the border provinces of Kilis and Hatay's Reyhanlı district with rockets, killing five civilians and injuring some 65 others.

Prime Minister Binali Yıldırım said Friday that YPG attacks on civilians would not affect Turkey's firmness on clearing terrorist from the Syrian border. "They fired 82 rockets in 12 days. Five of our citizens were killed, more than 100 were wounded. So will we wait and see their actions? No, we will clear them from our borders," he said during a ceremony in Ankara.

On Jan. 21, two rockets fired by YPG terrorists killed one Syrian national and injured 46 civilians, including 16 Syrians in Reyhanlı. On Wednesday, five rockets landed in the district, killing a 17-year-old high school student and injuring two others.

Whereas in Kilis, two people were killed and 11 others were injured when a rocket fired from YPG-held areas in Afrin hit a 17th century mosque in the city center on Jan. 24 while prayers were ongoing.

Both Kilis, a city of 150,000 with Syrian migrants constituting more than the local population, and Reyhanlı, a town of 100,000 people with one-third made up by Syrians, have been targeted by various factions of the Syrian Civil War since 2011.

Kilis was frequently targeted by Daesh terrorists with rockets, artillery and mortar fire starting late 2015, killing more than 20 people and injuring dozens more. Daesh attacks on Kilis were among the primary reasons for the launch of Operation Euphrates Shield on Aug. 24, 2016, clearing the terrorist groups from northern Syrian towns of Jarablous, al-Rai, Dabiq and al-Bab.

Reyhanlı was targeted in 2013 with a twin car bombing that left 52 people dead, which was Turkey's deadliest terror attack at the time. The attack was widely perceived as provocation by Syrian intelligence aimed at causing a rift between Sunnis and Arab Alawites living in the region, which is known to have a diverse ethnic and religious population.