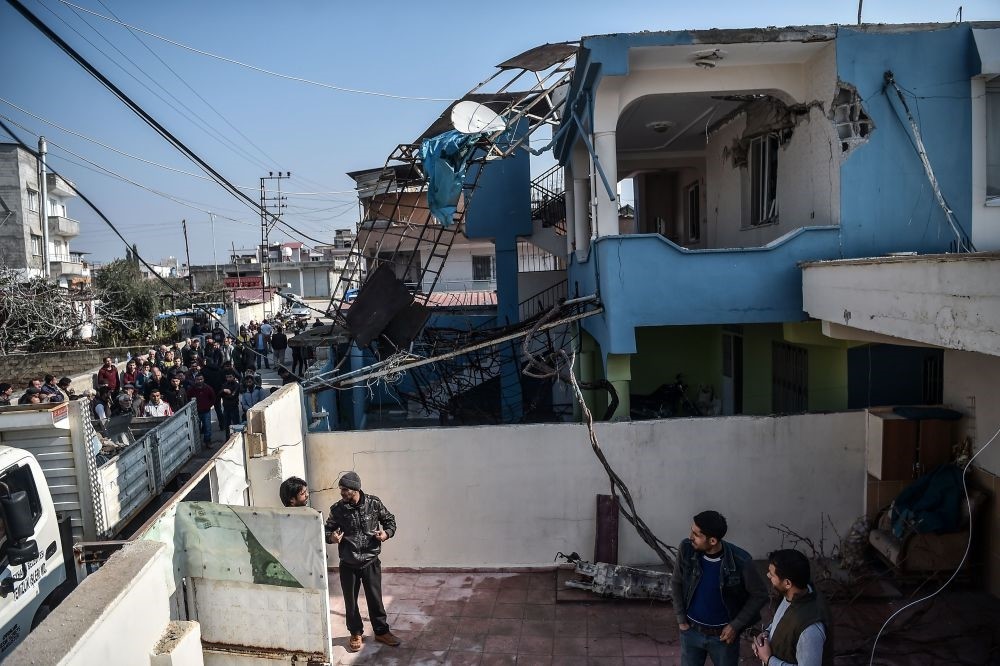 A 68-year-old man was the latest victim of rockets fired by the YPG near the Syrian border and, as Turkish forces and the Free Syrian Army made new gains in Operation Olive Branch

A 68-year-old man was the latest to fall victim to a rocket fired by the People's Protection Units (YPG), the Syrian affiliate of the PKK terrorist group, in Reyhanlı, Hatay. Rıfat Sinirli was killed and seven others were injured after three rockets hit an industrial site in Reyhanlı.

Prime Minister Binali Yıldırım said on Friday that YPG attacks on civilians would not affect Turkey's firmness on clearing terrorists from the Syrian border.

"They fired 82 rockets in 12 days. Five of our citizens were killed, more than 100 were wounded. So will we wait and see their actions? No, we will clear them from our borders," he said during a ceremony in Ankara.

The General Staff on Friday said that at least 823 YPG terrorists have been killed since the beginning of the Afrin operation. In a statement, the military added that the Turkish Armed Forces had destroyed six targets and neutralized 12 terrorists in overnight airstrikes.

President Recep Tayyip Erdoğan called the Avlar family on Wednesday to offer his condolences. Erdoğan told the father that the state was ready to provide any assistance needed and that the fight against terrorists will continue.

"Terrorists are paying and will pay a heavy price," he said.

The Pentagon on Thursday condemned the YPG attacks on Kilis. Joint Staff Director Lt. Gen. Kenneth F. McKenzie Jr. said the Pentagon condemned "any attack targeting Turkey." Speaking about the U.S.-backed Syrian Democratic Forces (SDF), which is dominated by YPG elements in northeastern Syria, McKenzie said the U.S. would retrieve weapons given to the group only after the fight against Daesh is over.

"Turkey is a NATO country, and we do not always see everything in the same way, but we're working together. We have also worked with the Turks and continue to work regarding the [PKK] insurgency inside [Turkey]. But today we need all parties in Syria to focus on the fight against Daesh," White said.

U.S. military support for the Democratic Union Party (PYD) and its armed YPG has long been a major point of tension between Ankara and Washington. The U.S. relies on YPG fighters as the main ground force in the fight against Daesh, while Ankara argues that one terrorist group cannot be used to confront another terrorist group.

Turkey also often criticizes the inconsistency of the remarks coming from the Pentagon, CENTCOM and the White House on providing military support to the YPG.

Presidential spokesman İbrahim Kalın said that the YPG, which the U.S. has called a reliable ally, is using human shields to stop Turkey's lawful counterterrorism operation in northwestern Syria."The use of human shields to stop Turkey's lawful steps in the region should ring alarm bells in the White House, which has been told by policymakers that the YPG is a reliable ally in Syria," Kalın wrote in an opinion piece for CNN International online.

Kalın went on to warn, "Those who fail to see the PKK threat in Syria are making a historic mistake."

"Eliminating all terrorist threats from Syria should be welcome as a right step to ensure peace and security and protect Syria's territorial integrity," he said.

A spokesperson from the Turkish Foreign Ministry on Friday denied the reports of civilian casualties.

"Turkey takes all measures to prevent civilian casualties in the Afrin operation. But the YPG uses civilians as human shields, doesn't allow them to leave the region and forcibly recruits children and drives them to the conflict zones," the Foreign Ministry statement said.

Meanwhile, Turkey's fight against terrorism has received support from some of its allies.The Canadian Foreign Ministry said it recognizes Ankara's security concerns in a statement on Thursday.

"Canada recognizes Turkey's legitimate security concerns. However, we urge restraint and call for every possible effort to be made to protect civilians and fully respect international humanitarian law," the statement read.

French President Emmanuel Macron on Thursday downplayed the cautionary remarks he made about Turkey's operation after Ankara said they were insults.

Macron on Wednesday warned Turkey that the operation in Afrin should not become an excuse to invade Syria, urging Ankara to coordinate its action with its allies.

In a curt response on Thursday that highlighted the strain between Ankara and its NATO allies, Foreign Minister Mevlüt Çavuşoğlu said: "We consider a country like France giving us reminders about an operation we are carrying out in accordance with international laws to be insults. We are using our right to self-defense in line with U.N. Security Council decisions, and it is not an invasion. They shouldn't be two-faced."