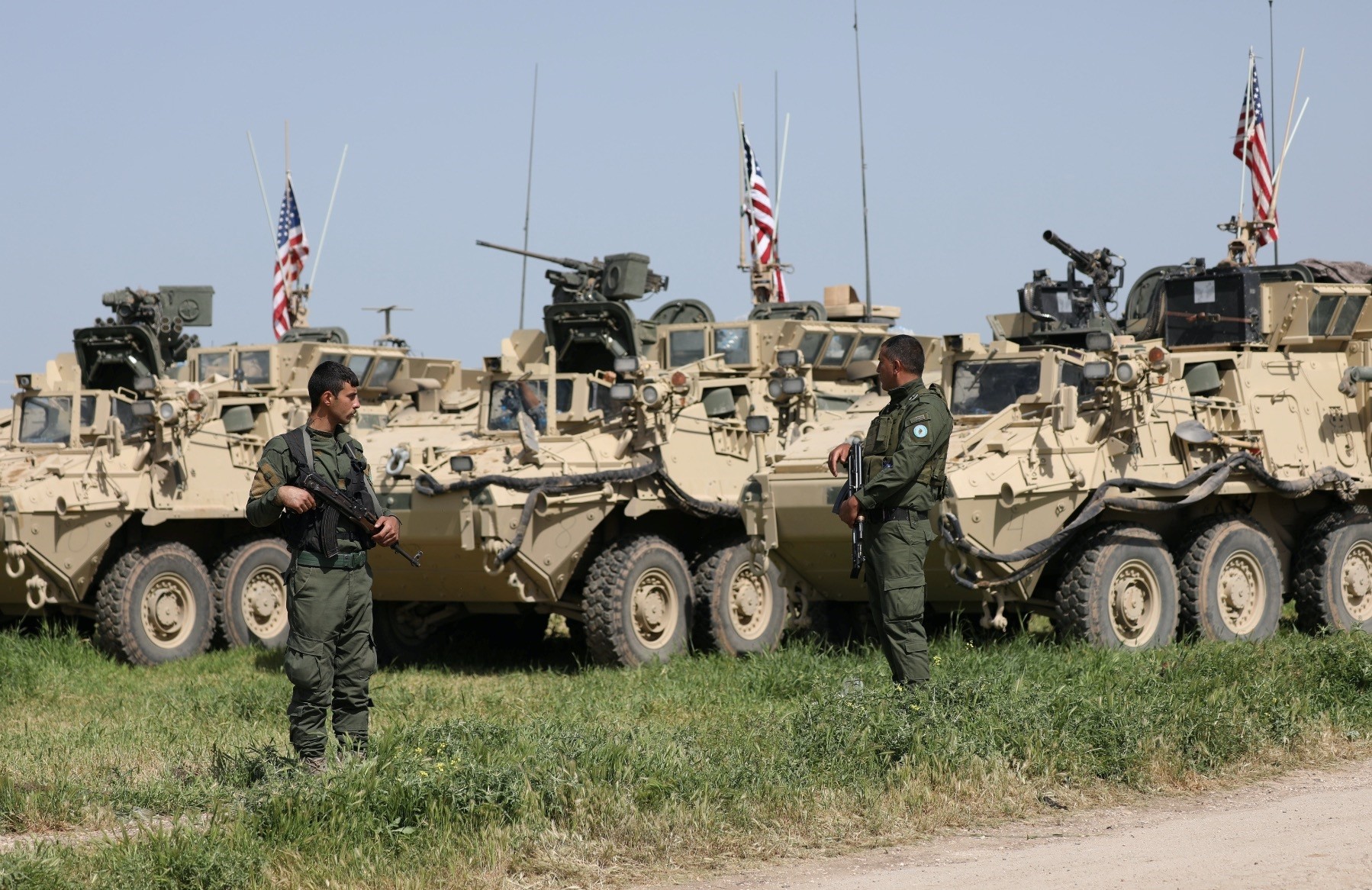 The PKK terrorist organization's Syrian affiliate, the PYD/YPG, has increased its attacks and oppression on Christian minorities in areas under its control, including forced recruitment, forced migration and confiscation of private property

The PKK terror organization's Syrian affiliate, the Democratic Union Party (PYD) and its armed wing, the Peoples' Protection Units (YPG), which has been backed by the United States as part of its anti-Daesh strategy in Syria, has recently intensified its oppression of minority communities in the areas it controls in Syria. Video footage on the World Council of Arameans [Syriacs] (WCA)'s website showed the writing "Seized by the Executive Committee of Qamishli," in Arabic text on the outer wall of a house belonging to an Armenian Christian family. The writing in red lettering referred to the PYD and the YPG, in reference to their self-proclaimed local authority.

The video was recorded by Eddie Gaboro Hanna and shared with WCA. "What the YPG does is reminiscent of what ISIS [Daesh] did to Christians in northern Iraq. It has confiscated many more buildings like this," Hanna was quoted as saying by the WCA. The YPG has been condemned for its atrocities against the Arabs, Turkmens, Kurds who do not share PYD ideology, or other minorities, by the international human rights organizations. The terrorist group has particularly increased its attacks on minorities and civilians after Turkey launched the cross-border operation, Operation Olive Branch, on Jan. 20, to clear the terror elements from northern Syria.

Groups like the Human Rights Watch, Amnesty International, the KurdWatch, as well as the United Nations have reported that the terrorist groups have used child soldiers, forcefully recruited members for combat, forcefully people out of areas under its control, carried out arbitrary arrests, and confiscated property, which led to major demographic changes.

Turkey has long argued against the U.S. support to YPG in the fight against Daesh, arguing that YPG has organic links with the PKK terror organization, which is listed as a terror group by the U.S., the European Union, and the U.K., and that a terrorist group cannot be defeated by another one.

According to WCA, Christians are facing more and more oppression from the PYD and the YPG and its security forces called "Asayesh."

"Nevertheless, following intense negotiations, all of them were released except for Aramean Saliba A., 20, who was snatched in broad daylight out of his shop in Qamishli by the Asayesh," the WCA said.

Saliba was first held near Qamishli, a northeastern Syrian city near the border with Turkey, where the PYD has a base, but his current location is unknown.

"Every day they kept telling us that he will be released soon. Then they said tonight, and then they said tomorrow morning. After 10 days, we stopped believing them. We are concerned about Saliba's well-being," said a friend following the issue closely.

A negotiator, who also wanted to remain anonymous, said the terrorist PYD was indirectly forcing people to leave their homes to grab more territory.

"The Asayesh, who has taken our young people, tell us that they have handed them over to the YPG, the Kurdish armed unit. But the YPG tells us to contact the Asayesh," he said. The WCA reported that two more Christians were recently kidnapped.

Johny Messo, the head of the WCA, has strongly condemned the PYD and Asayesh's ongoing terror campaign.

"Our people on the ground keep telling us about all sorts of human rights violations, including the confiscation of land, intimidations, threats, and a rising wave of kidnappings. This must immediately end. We demand that the Kurdish YPG forces respect Syria's native Arameans. We further call on the U.S. to make this critical message clear to the YPG," he said.

In November 2015, 18 groups, belonging to Syria's non-Muslim minorities, issued a joint statement complaining about the violation of human rights, forceful recruitment of minorities to military, confiscation of private property, and also interfere in the educational activities and curriculum.

In many areas held by the PYD, other minorities of Syria are also present. In fact, in some areas, as in northern Syria's Manbij, the majority can be the non-Kurds. It is reported that 95 percent of Manbij, currently held by the PYD with the support of the U.S., is populated by the Arabs.

Syrian Network for Human Rights (SNHR) reported in January 2016 that the YPG looted areas it held, committed demographics changes and ethnic cleansing in areas with no Kurdish population, and destroyed private property. According to the SNHR report, dozens of villages were destroyed by the YPG and tens of thousands were forced to migrate from areas under their oppression. It was underlined in the report that the YPG atrocities were considered war crimes, as per the Roma Agreement's eighth article.

Similar findings, on destroying villages and forceful migration, were also reported by the Amnesty International's report in September 2015, titled "We Had Nowhere Else to Go," based on experts findings, satellite images, and local sources.

The Amnesty report suggests that the number of Turkmen populations in villages captured by the YPG was significantly decreased after the terrorist group took them under their control.