Number of liberated areas by Turkish military, FSA rises to 35 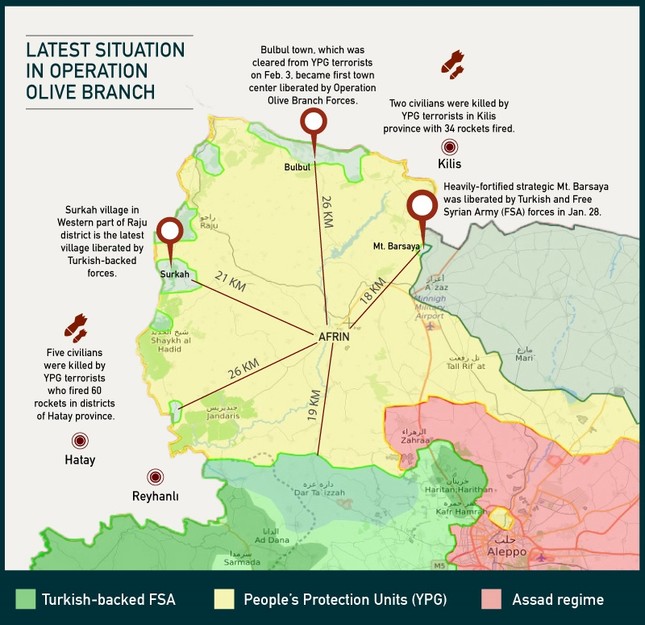 Turkish and Free Syrian Army (FSA) forces yesterday captured another village from People's Protection Units (YPG) terrorists in northwestern Syria, near the Turkish border, raising the number of liberated areas to 35.According to Anadolu Agency (AA), the forces launched a joint operation in the village of Sourkeh in western Afrin.

Since the beginning of the operation, the Turkish Armed Forces (TSK) and FSA have managed to capture 35 strategic areas from the YPG.

A total of 970 PKK-linked YPG terrorists have been killed in Operation Olive Branch in Syria's northwestern Afrin region, the military said in a statement Tuesday.

The military said that 12 terrorists were killed in airstrikes carried out overnight.

Meanwhile, 94 rockets have been fired by the YPG since the beginning of Turkey's Operation Olive Branch, Prime Minister Binali Yıldırım said Sunday.

Sixty rockets targeted Hatay province and 34 landed in Kilis province, both bordering Syria, Yıldırım said during a visit to the Kilis governor's office.

"Seven civilians have been killed and 113 people have been injured," Yıldırım said. Five of the seven civilians killed by YPG rockets were in Hatay province while two were in Kilis.

Heavily fortified strategic Mount Barsaya was liberated by Turkish and FSA forces on Jan. 28. The mountain overlooks a plain and is the shortest route between the towns of FSA-held Azaz and YPG-held Afrin. Its location also allows the YPG to target civilians in Kilis and the Syrian town of Azaz with mortar, artillery and rocket strikes.

Also, the town of Bulbul, which was cleared of YPG elements on Feb. 3, was the first town center liberated by Operation Olive Branch forces.

"I have something to say to those who are spreading smear campaigns. You are our ally in NATO and we are working together in various fields. If this alliance is to persist, you will ignore the words of looters and accredit the words of Turkey, a trustworthy friend," Yıldırım said.Yesterday, Yıldırım also called the Hatay operation center and talked with 2nd Army Commander Lt. Gen İsmail Metin the PTTMessenger and received information on the operation. "Our operation continues as planned. We are doing our best to prevent both our soldiers and civilians from harm. Our target is nothing but the terrorists," Temel said.