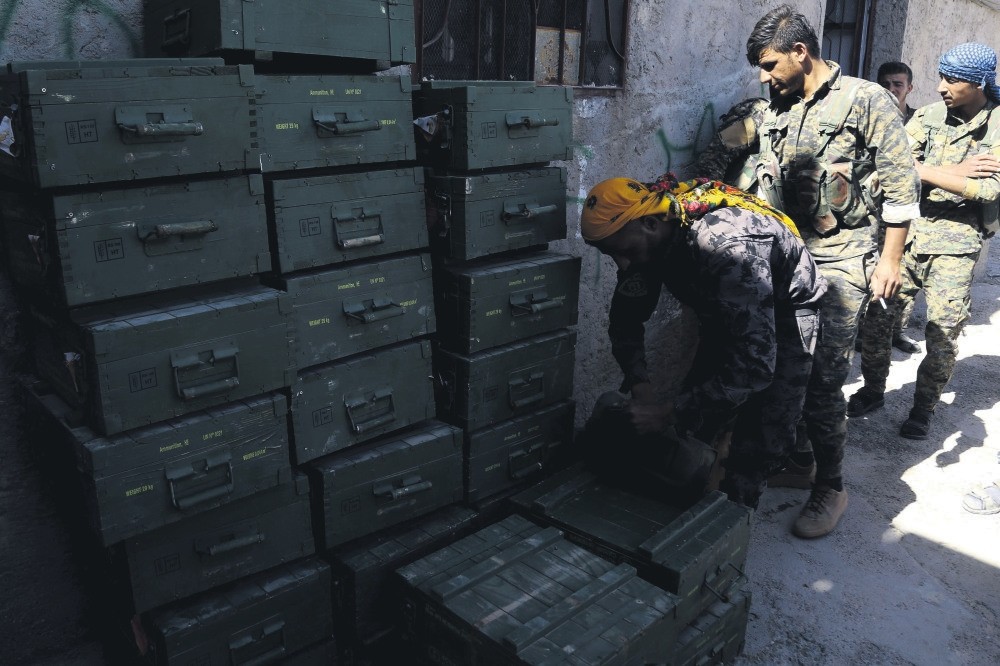 As the Turkish military and the Free Syrian Army (FSA) continue their advance in northern Syria, Ankara has been tracing the origin of the weapons used against Turkey by the PKK-affiliated People's Protection Units (YPG) in Afrin.

A huge amount of ammunition bound for the YPG terrorists has been seized recently in Operation Olive Branch in several locations. Weapons of different origin were also found in villages liberated from the PKK-affiliated group.

President Recep Tayyip Erdoğan said that investigations are ongoing to identify the origin of the weapon that was used in a tank attack last week, killing six Turkish soldiers. "The U.S. denies the allegations. I didn't receive any information from the general staff on the issue. We will announce the outcome when the investigation is completed," he told reporters in a press meeting in Rome after a meeting with Pope Francis at the Vatican.

In addition, the terrorist group is considered to be in possession of anti-tank missiles as well as man-portable air-defense systems (MANPADS), which are thought to be used in the recent attacks on Turkish tanks.

Government spokesperson Bekir Bozdağ said late Monday that Ankara will destroy every weapon and ammunition sent to the Afrin region, while criticizing Washington for its arms delivery to the YPG.

"Turkey requested several times for the U.S. to cease its weapons support to the YPG. But Washington has provided 2,000 planes and 5,000 truckloads of weapons and ammunition to the terrorists, with the condition of using in the fight against Daesh. Unfortunately, they are using those weapons against a NATO member," Bozdağ said after a Cabinet meeting in Ankara.

The PKK is recognized as a terrorist organization by the U.S., EU and Turkey. However, despite the organizational links between PKK and the YPG, the U.S. has supported the group militarily in Syria.

The YPG has not only been using U.S.-made weapons but many Russian-made missiles were also found in areas liberated from the terrorists, and some have been seized before there delivery could be completed.

The Nour al-Din al-Zenki Movement also raided a fuel tanker near the Sheikh Aqil Mountains in the Aleppo countryside last week for suspected smuggling from Idlib to Afrin. A large number of weapons were seized, including Russian-made anti-tank guided missiles, RPG-7 anti-tank weapons as well as anti-aircraft weapons and infantry rifles.

In addition, Turkey's military experts are also investigating the kind and origin of the weapons used in an attack that targeted two Turkish tanks last week, killing six soldiers.

The FSA, backed by Turkey, captured a YPG terrorist training camp in the west of Afrin on Tuesday. Video footage filmed by Anadolu Agency shows a terrorist camp in the area, which has showers, a dormitory, a dining hall and a training parkour.

YPG terrorists, who had also forcibly taken child recruits, were reportedly being trained in groups of 35, according to local sources in the region who refused to be named for security reasons. In the footage, tunnels and shelters used by the terrorists to shield themselves from airstrikes can be seen.

President Recep Tayyip Erdoğan stressed on Tuesday that as Operation Olive Branch in Syria continues decisively, Turkey will move toward Manbij with the aim of handing over the region to its real owners.

Speaking at his party's parliamentary group meeting, the president chastised the U.S. for its unfulfilled promise on Manbij that it would leave the province.

"We will go to Manbij to hand it over to its real owners, this is our main difference," Erdoğan said.

Commenting on the ongoing operation, President Erdoğan stated that the number of terrorist that have been neutralized by the Turkish Armed Forces is almost at a thousand and they will continue until Idlib is cleared.

"With our step in Jarablus, 135,000 people have returned to their homes. Our aim is to enable the return of Afrin residents to their homes," the president said, underlining that Turkey has already provided $30 billion of aid to improve the living conditions there.

As Turkey shares a 911-kilometer border with Syria, which is convulsed in civil war, the country has faced a difficult task of eliminating threats posed by terrorist groups to its national security. The partnership of the U.S. with the terrorist Democratic Union Party (PYD) and its armed wing YPG has drawn Turkey's ire. The groups are inextricably linked to the PKK, which continues to carry out attacks on Turkey and is designated as a terrorist group by the U.S.

"As of today there have been over 700 harassment missiles fired by the terrorists, and we have over 100 martyrs. Is the U.S. seeing this?" Erdoğan asked, criticizing comments that call on Turkey to end its operation in a short period of time. Upon the statements, Ankara stressed that Turkey has all the right to be in Afrin and it is paying the utmost attention to prevent civilian casualties.

Turkey, whose role has been pivotal in the fight against Daesh, has assiduously asked the U.S. to end its relations with the PYD/YPG. When the U.S. rejected to back out of its partnership and opted to back the terrorist group as proxy fighters, Turkey made it clear that it will not remain mute in the face of growing security threats and launched an operation to clear its borders from terrorists.

Underlining that Turkey has no problems with the Kurdish people, President Erdoğan made it clear that "our problem is only with the terrorists."

Touching on the challenges directed toward Turkey, the president stated that Turkey has proven successful in terms economy, diplomacy, and in its fight against terrorism. This cannot be denied by other countries, Erdoğan added.

Meanwhile, three civilian were killed and 15 others were injured in a mortar attack carried out by YPG terrorists in Afrin. The terrorists targeted the Atmeh refugee camp in northern Idlib, striking panic among its residents. The wounded refugees were brought to nearby hospitals for medical treatment.