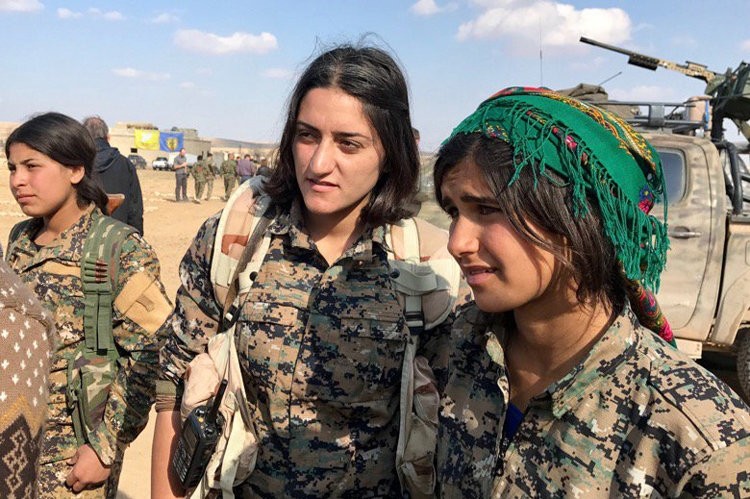 The PKK and the YPG have a history of exploiting children and forced recruitment. Under international law, the recruitment or use of children under 15 is designated a war crime.
by Daily Sabah with AA Feb 08, 2018 12:00 am

Kurdish families in Hatay and Afrin are waiting for Turkish soldiers to provide good news from the operation in Afrin, rescuing kidnapped children from the PKK terrorist organization's Syrian offshoot Democratic Union Party (PYD) and its U.S.-backed armed wing People's Protection Units (YPG). Living in a neighborhood on the Syrian border with a population of 500, residents of Hassa, in southern Turkey's Hatay, have not seen their relatives in Afrin for years because of the civil war and the eventual YPG invasion.

On top of that, residents of the town are quite concerned since their relatives told them that the children in Afrin have been forcibly taken from their families by the YPG and recruited to fight. Speaking to AA, the headman of the Çınarbaşı neighborhood in Hassa, Halil Kurt, said that most residents in the neighborhood have relatives in Syria. "My wife's family is in Afrin. Because of the terrorism in the region, she cannot visit them. She has not seen any of her relatives in four years. My mother in law could not see her grandchildren. We have only managed to see photos of them," said Kurt, adding that when Turkish military clears the areas, they will see their relatives.

"Since 2013-14, the number of these kinds of cases have escalated. My wife's relatives were kidnapped 20 days ago and we still have not heard a word from them," mukhtar Kurt said, while adding that similar things happened to other families as well and none of the kidnapped have returned yet.

"There is a Syrian man whose wife was kidnapped by the PYD. He somehow managed to rescue his wife. However, as revenge, the PYD killed his brother afterwards," Kurt stated.

Another resident, Elif Kurt, said she was a Kurdish who is proud of living in Turkey. She added that she prays for the Turkish state and its soldiers.

The residents of Hassa are closely following Operation Olive Branch as they pray for the operation to successfully come to an end as soon as possible.

Muhammet Kurt, another resident of the neighborhood, said they have heard about the brutalities of the terrorist organization from their relatives in Afrin over the phone.

"One of our relatives called me and said that his 14-year-old son and daughter were taken from him at gunpoint. This is the real face of the terrorists. They are forcefully recruiting children and holding everyone at gunpoint to make them fight against Turkish soldiers," Kurt said, adding that he was also praying for the Turkish military.

The PKK and its Syrian offshoots, the PYD and YPG, are both listed as terrorist groups by Turkey, while the U.S. and the EU list the PKK as a terrorist group but do not consider the PYD as one, despite its acts of terrorism.

Turkey launched Operation Olive Branch on Jan. 20 to remove the PYD, the YPG and Daesh terrorists from Afrin in northwestern Syria.

The PKK and the YPG have a history of exploiting children and forced recruitment. Earlier in 2017, the YPG mandated conscription for all girls and boys over the age of 16 in the city of Manbij, located on the west banks of the Euphrates. The Yazidis, a regional minority group, have also suffered under the PKK and the PYD.

A report, "The Forcible Recruitment and Deployment of Child Soldiers by the Democratic Union Party in Syria," claimed that in addition to adults being forcibly conscripted by the PYD to serve in its armed wing, the YPG, there has also been an increase in the recruitment of children as young as 12.

A report by the Human Rights Watch (HRW) also documented recruitment of children by the PKK's Iraqi offshoots, the People's Defense Forces (HPG) and the Shingal Resistance Units (YBŞ).

"We trust our President Recep Tayyip Erdoğan. May God not leave us without him," said Sultan Kurt from Hassa, while adding that she has not seen her aunt and cousins in Afrin for seven years now.