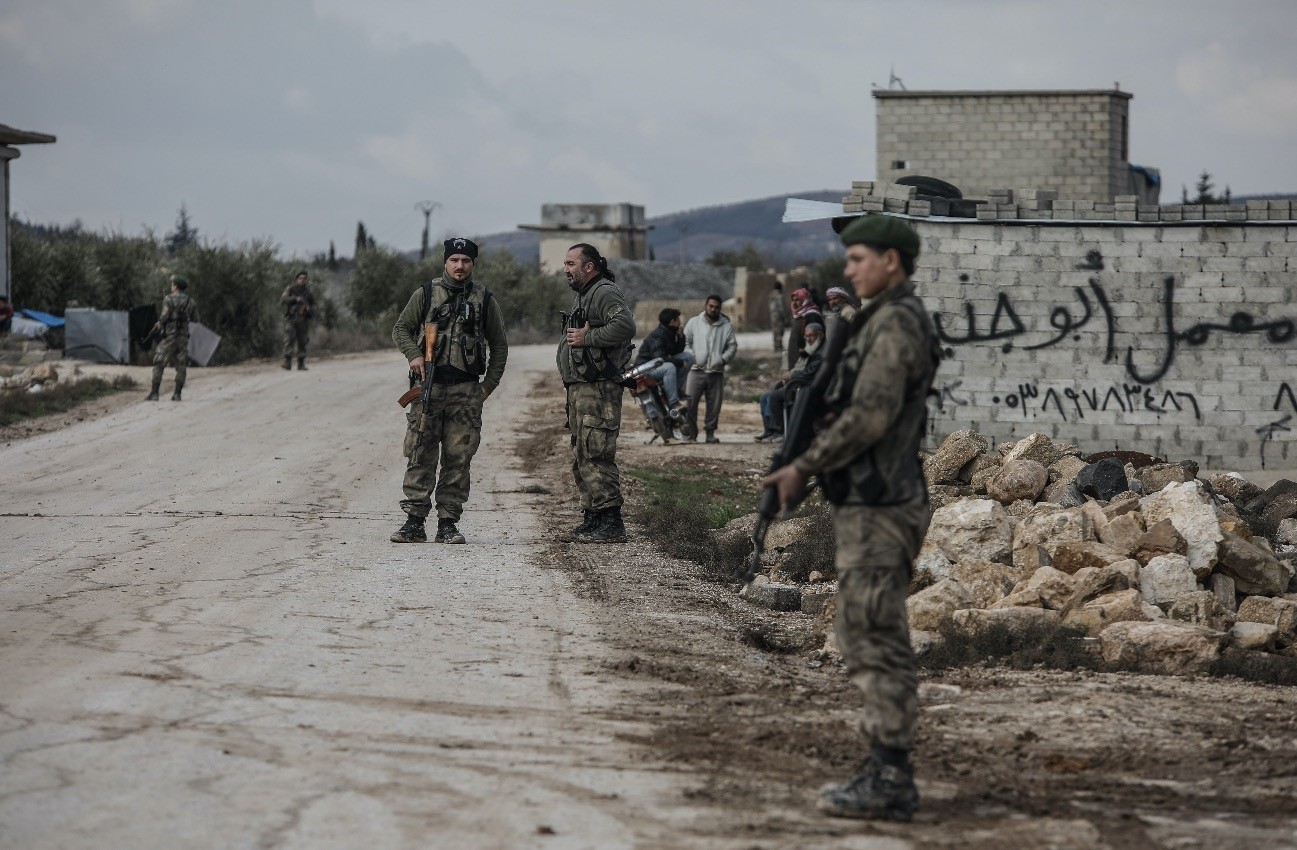 Turkish forces in territory captured from YPG terrorists in northern Syria.
by Daily Sabah with AA Feb 13, 2018 12:00 am

The PKK-affiliated People's Protection Units (YPG) terrorists are using civilians as human shields in Afrin, driving them to the battlefield as cover in conflicts with Turkish and Free Syrian Army (FSA) forces, according to Anadolu Agency (AA).

The media outlet also claimed that the terrorists used a group of civilians, including children, as a decoy in the attack that killed nine Turkish soldiers on Saturday.

According to the security forces on the ground, Turkish soldiers fired a warning shot as a group of 70-80 civilians approached the soldiers in a hill previously captured from the YPG. But as the group continued to advance, Turkish commandos moved forward to stop them. At that point, YPG terrorists hiding among the civilians threw grenades and opened fire, killing nine Turkish soldiers from a team of 16.

It was also revealed that the T129 ATAK helicopter, which crashed on the same day, was bound for the region to help wounded soldiers. The two crews inside the helicopter died in the crash taking the total number of Turkish casualties to 11.

Reports also suggested that the civilians dispersed and returned to the village after the clash broke out. At least 40 terrorists were killed by Turkish commandos in the ensuing battle and the area was cleared within a short time.

Following the clash, Turkish military reiterated that it was targeting only terrorists, their shelters, weapons, vehicles and tools and it was also taking elaborate precaution so as not to put civilians in harm's way.

Turkey launched Operation Olive Branch on Jan. 20 at 5:00 p.m. to neutralize terrorist groups and provide security and stability along Turkey's southern borders with Syria as well as in the region.

Meanwhile, the Turkish Armed Forces and the FSA continued to advance on several fronts towards Afrin yesterday.

The Turkish military said in a statement Monday that it has liberated Mahmudiyah in western Afrin. It added that a total of 1,369 terrorists have been "neutralized" since the operation began.

In a separate statement, the TSK announced that a total of 31 Turkish soldiers have been killed and 143 wounded, none with life-threatening injuries, since the beginning of the operation.

"The distraction of what's going on up in Afrin right now, which is drawing off some of the [SDF] forces, which have got about 50 percent," Mattis told reporters on his way to Brussels Sunday where he is scheduled to meet his Turkish Defense Minister Nurettin Canikli, adding that the percentage could be less or more.

Mattis added that officials from the Turkish and U.S. military have started conducting daily meetings, and said the U.S. is assisting Turkey "in terms of missile defense and counterterrorism." He also acknowledged areas of disagreement on how to take down Daesh as quickly as possible.

"But they have a legitimate security concern, and we do not dismiss one bit of that, along their border with Syria," he said. The U.S. partner force on the ground, the YPG, is the Syrian extens

ion of the PKK, a group the U.S. designates as a terrorist group.

Some U.S.officials told American media that hundreds of forces had already left the fight against Daesh and refocused on the Turkish military, raising concerns about the sustainability of the forces.

The joint statement released by the White House stressed the importance of shared interests and once again described bilateral relations as strategic. It also mentioned the exchange of opinions on how to effectively counter the terrorist groups in the region.

* CONTRIBUTED BY RAGIP SOYLU FROM WASHINGTON