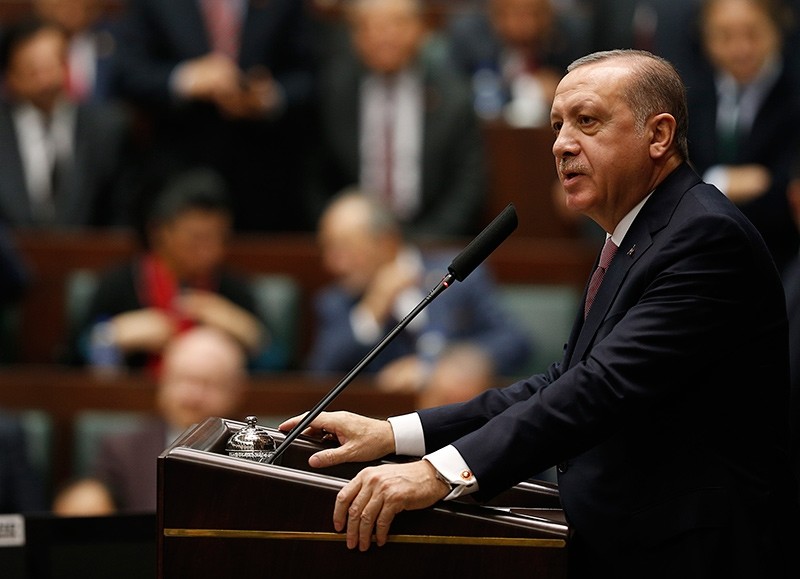 The city center of Afrin in northwestern Syria will be encircled in the upcoming days, President Recep Tayyip Erdoğan has said, as Operation Olive Branch has recently extended into its second month.

Addressing the Justice and Development Party's (AK Party) weekly parliamentary group meeting as its chairman, Erdoğan said that even though it seems as though the operation is moving slowly, the city will be besieged in the upcoming days.

"It might seem like it moves slowly but we did not go there to annihilate everything that comes our way. We have gone in to turn it into a livable and secure area. … It takes time for some preparations to be made. The encircling of central Afrin will take place in the upcoming days," Erdoğan said.

With the siege of central Afrin, the president said, the Turkish military will be able to prevent People's Protection Units (YPG) terrorists from receiving aid from outside. "Also, there will not be any opportunity for the terrorist organization to negotiate with anybody," he added.

Citing that 1,715 YPG terrorists have been killed so far over the course of the 32 days of the offensive, Erdoğan said that 32 Turkish soldiers have also been killed.

The president said that Turkey's diplomatic efforts continue at full steam while the military operation on the ground moves forward. "We never think about shutting down dialogue channels. We will continue operations on the ground without stopping. We try to be in contact with all sides of the Syrian issue."

Concerning his phone conversations with Russian President Vladimir Putin and Iranian President Hassan Rouhani, Erdoğan said that Turkey aims to achieve the most accurate outcome with its military power on the ground and the strength of its words in diplomacy.

That being said, Erdoğan asserted that if Turkey's red lines are crossed, Ankara has to show those red lines to everyone.

The president said that there is security, trust and justice where Turkey is. Stressing that only terrorist groups and other powers supporting them are displeased about Turkey's presence in the region, Erdoğan said that locals do not have any problem with the Turkish military being there.

Meanwhile, commenting on recent reports from Syrian state media about the regime's plan to enter Afrin, Foreign Minister Mevlüt Çavuşoğlu said yesterday in a televised interview that "regime forces have not entered Afrin yet and it is unclear whether they would enter or not."

Çavuşoğlu said that the regime is in a dilemma, currently questioning whose existence in Afrin is better for itself. "The YPG aims to divide Syria, and we see that this fact is also acknowledged in the statements from the regime," Çavuşoğlu said. "Turkey seeks to clear these areas of the terrorists and enable the return of refugees to their homes.

"We do not have any problem with anyone who fights against the YPG. However, if the regime enters Afrin with an aim of providing support to YPG terrorists, no one can stop the Turkish military."

On Monday, Reuters quoted Syrian state-run TV as saying that Syria's "Popular Forces" would enter Afrin in the coming hours. However, the news turned out to be false later in the day. On Sunday, a senior YPG official told Reuters that the group had reached a deal for the Syrian army to enter Afrin and that it could be implemented within two days. Unconfirmed reports said the popular forces would be [expected to] enter Afrin at 6 p.m. on Monday.

Presidential Spokesman İbrahim Kalın reacted yesterday on Twitter, saying that spreading the news was propaganda. Kalın noted that while the reports sound like propaganda, they do not mean there is no "secret negotiation" between the Assad regime and the YPG.

The top presidential aide said on his official Twitter account that Turkey's counterterrorism operation will continue with determination, regardless of what happens.

Deputy Prime Minister Bekir Bozdağ, the government spokesman, said late on Monday that if regime forces enter Afrin, "it would give a green light to dividing Syria, such a move would cause disaster in the region and would have serious consequences."