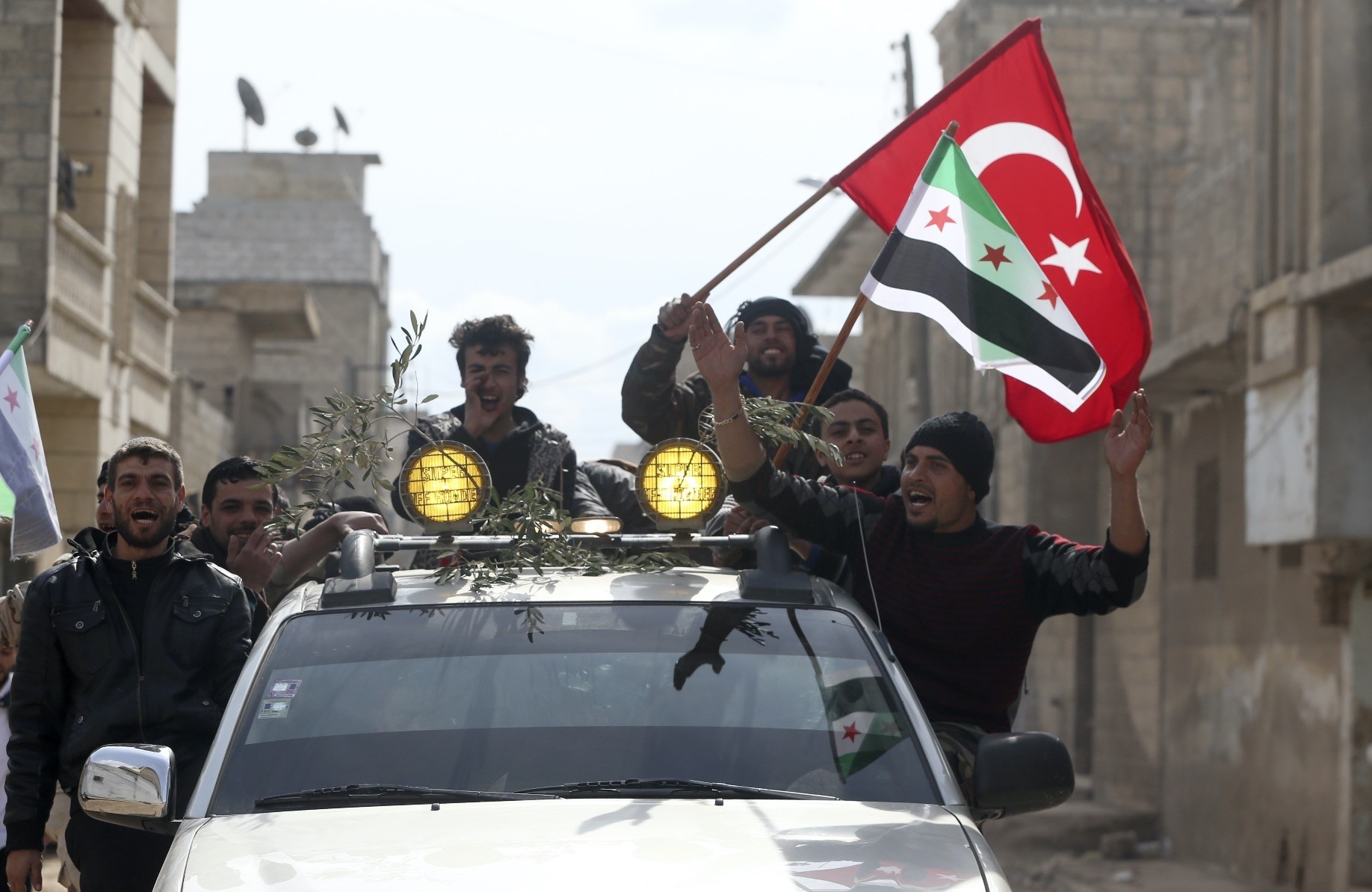 As the main, legitimate group in the Syrian opposition that fights against both the Syrian regime and terrorists, the criticism of the Free Syrian Army for being extremist has no basis, experts say

While Turkey continues Operation Olive Branch in northern Syria, there have been questions raised regarding the country's main partner, the Free Syrian Army (FSA), for its identity and stance, despite being the first to support the group both in its fight against the Syrian regime, People's Protection Units (YPG) terrorists and Daesh.

Founded in 2011 by former officers from the Syrian Armed Forces who opposed the use of violence by the Syrian government, the FSA is a military network that consists of many Arab, Turkmen and Kurdish sub-groups and ultimately aims to bring down the Syrian regime.

One of the founders of the group, Col. Riad al-Asaad, explained the founding principle of the group as "[w]orking together with the people to overthrow the system and protecting the people against the armed killing machines of the system."

Although initially formed by former soldiers of the Syrian military, civilians also joined the group and, today, the estimated number of members is more than 25,000.

The FSA quickly gained strength and international support for its fight against regime forces, becoming the main, legitimate, opposition group in the country. However, in 2012, group had to re-structure itself with a Supreme Military Council meeting in Antalya in 2012 since many smaller groups claimed to be the part of the FSA and the group's control over its range had weakened. As a result of the meeting, the FSA gained a more centralized structure and many sub-groups fell under the command of the military council. From that point, the group differentiated itself from other opposition groups by saying that it is a "more moderate and stronger alternative." Turkey, alongside most of the Western world, was one of the first countries to back the FSA.

"The FSA is the military wing of the legitimate Syrian opposition," Can Acun, a Middle East expert, said. "Since Turkey supported the revolution of the Syrian people from its first day, it also supported the group for being the legitimate representatives of the people."

FSA is the legitimate opposition group of Syria in international area

However, since its first day, the FSA has always been a group that was taken as an interlocutor by the international community in matters regarding Syria, the group has also been criticized for being radicalized and losing its moderate nature.

According to Yusuf Özhan, ESMEDYA digital group editor-in-chief and an expert on Middle Eastern affairs, there have been three big incidents in the history of FSA that have affected the international community's perception of the group.

"The first one was the Daesh raid on FSA weapons stores in the village of Atme, near Azaz, which created the impression that the weapons that were given the group were actually used by the extremists since the FSA could not defend itself against them. The second incident was the leak of a video that allegedly showed opposition members beheading people and eating human body parts. The third was the U.S.' stopping the program in Oct. 2015 with the claim that the groups that were trained were radicalized," Özhan explained with the caveat that all of these changed the Western point of view on the group.

Some claims even suggested it is linked to al-Qaida. Clashes between al-Nusra Front and the FSA and the ideological gap between the two groups would be enough to disprove the claims.

"Western countries claim such things to legitimize their current position. However, there are not many differences between the FSA of 2011 and the FSA of today," Acun said,.

Still, the FSA has continued to be one of the most remarkable opposition groups in Syria to this day, especially thanks to the support it receives from Turkey. Recently, an FSA delegation was present at the Geneva meetings under the high negotiation delegation. Similarly, high-ranking people from the FSA were present in the Astana meetings. According to Acun, the FSA is aware that the military fight alone would not bring peace to Syria, which is why they attend such political meetings.

Initially training FSA, US cut support to group as it is weakened

FSA members are initially trained by the Friends of Syria Group, which was formed to find a solution to the Syrian civil war. It is composed of 11 countries, including the United States, United Kingdom and Turkey. Former President Barack Obama's administration particularly supported opposition groups against the Syrian regime since the beginning of the civil war in 2011 via the CIA – the FSA was the main opposition group that was supported. In 2014, the CIA launched its train-and-equip program to raise effective opposition forces to fight against Daesh. Jordan, Qatar, Turkey and Saudi Arabia also supported the program.

The FSA was again the main group that was trained inthe program at first. However, in 2015, the U.S. shifted the focus of the program and started to train and equip the PKK's Syrian affiliate YPG instead, supporting to the Syrian Democratic Forces (SDF).

The U.S. and Turkey signed an agreement in February to train and equip moderate Syrian opposition forces, mainly FSA elements, and the program started in Kırşehir in May 2015. A total of 154 men were trained by both Turkey and Jordan under the 30th Division, which the U.S. specifically established to fight Daesh.

The agreement planned to train 300 to 2,000 FSA soldiers but only 54 completed the program. Before long, Turkish media reported that dozens of moderate opposition fighters had withdrawn from the program after they refused to sign a contract assuring that they would not fight against the Syrian regime. Many Syrian volunteers preferred to use their training to fight against Daesh as well as forces loyal to Syrian regime. The U.S. gave this as the reason for its policy shift. According to Özhan, the U.S. actually removed its security check standards and give military training and equipment without questioning after starting to support the Syrian Democratic Forces (SDF), which is dominated by YPG forces.

Following the U.S.'s cut of support and the rise of the SDF, the FSA went into decline in 2014. However, in 2016, with the support of Turkey, the group regained its force. In March 2016, a formation called the Hawar Kilis Operations Room was established. With this new formation, sub-groups like the Sultan Murad Division, Hamza Division, Sharqia Army, The Second Army, Al Nokhba Army and Rejal Alharb Brigade are united under the FSA umbrella. After the launch of the formation, the FSA started to act together with the Turkish military and launched Operation Euphrates Shield in August 2016. The latest process of the restructuring of the FSA is the launch of Syrian National Army, founded in December 2017, consisting of approximately 30 sub-groups that were linked to the FSA. The army, which is estimated to have 15,000 soldiers, aims to protect the area that was liberated in Operation Euphrates Shield and defend civilians against the Syrian regime and groups like Daesh and the YPG.

"Turkey has a solution for Syria that consists of three main parts. The first one is establishing a national army that consists of Arabs, Turks and Kurdish Syrians – an army that has the Syrian perspective instead of an ethnic or sectarian perspective," the second one is establishing security zones and the third is the return of refugees to their country, Özhan said.

Launched on Aug. 24 2017, Euphrates Shield was initially meant to clear the border of the threat of terrorism from Daesh and the YPG. Regarding the operation, Ankara had said that it was an act of defense since its cities and towns were under constant attack from both Daesh and the YPG, and that is why they should be driven from the border. By successfully achieving its aim, Turkey managed to force the YPG to withdraw to east of the Euphrates River while completely cleaning northern Syria of Daesh, seizing more than 2,000 square kilometers of territory. As a result of the operation, 50,000 refugees returned to their liberated towns, among which are Jarablus, al-Bab, al-Rai and Azaz, all in northern Syria.

After the operation, Free Police forces were established from from FSA fighters in the liberated regions to provide security and, according to Anadolu Agency (AA), almost 4,000 free police trained by Turkey started duty.

On Jan. 20, Turkey and the FSA launched another Operation Olive Branch against the YPG in northern Syria's Afrin region. According to the Turkish General Staff, the operation aims to establish security and stability along the border and in the region as well as to protect Syrian people from the oppression and cruelty of terrorists.