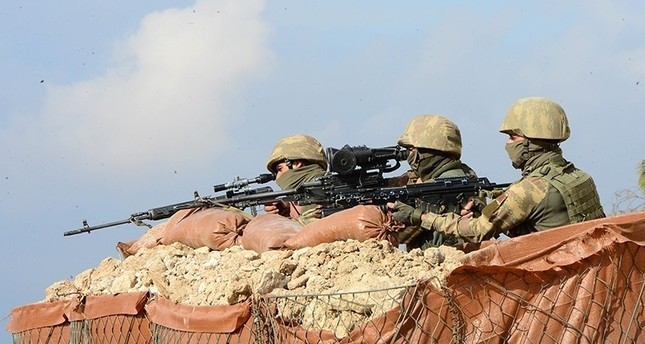 Following the retreat of the Assad regime forces from Afrin, Ankara has said the month-long Operation Olive Branch will continue until all terror threats to the country’s national security are swept away, warning regime and other elements of grave consequences for backing YPG terrorists

Turkish officials have asserted that Operation Olive Branch will continue until all threats on the Syrian border are eliminated and any PKK-affiliated groups in the region are destroyed. There has been criticism from the West of Turkey's offensive on Afrin against the PKK's Syrian affiliate People Protection Units (YPG), but Ankara has evaluated the situation and deemed it necessary to eliminate the terrorist group from northern Syria, arguing that it constitutes a national security threat to its sovereignty, as the two groups have direct organizational links. Ankara will do what is best for its national interest, and it "owes no explanation [for Afrin]," Presidential Spokesperson İbrahim Kalın told reporters yesterday.

Turkey launched the operation in Afrin on Jan. 20 to establish security and stability along ıts border and the region, as well as eliminate the YPG and Daesh and to protect Syrian people from the oppression and cruelty of terrorists. The operation is being carried out in line with Turkey's rights based on international law, U.N. Security Council decisions and the right of self-defense under the U.N. Charter, according to the military.

"Through Operation Olive Branch, we will eliminate threats directed at our southern border. The operation is moving full steam ahead as planned. The fronts that [Turkish soldiers have] created around Afrin have started to unite.

"Soon, the terrorists in all of Afrin will be given the punishment they deserve. Hundreds of thousands of people living there will be saved from cruelty," Yıldırım said during the 11th Development Plan Publicity meeting in Ankara. The prime minister added that Turkey's struggle with terrorist organizations and their extensions will last until "terror trouble" ends both at home and abroad.

Kalın said yesterday that a convoy of nearly 30 vehicles coming from the Aleppo region attempted to enter Afrin on Tuesday and averted by Turkish military shelling. Kalın told reporters in Ankara that the reports claiming that the Assad regime and YPG have reached an agreement need confirmation. "The plan of the Operation Olive Branch will resolutely continue even if there were bargains," Kalın said, and added that "we understand that the aim of these reports is making propaganda."

Kalın underlined that steps taken to support the YPG would mean siding with the terrorist group and therefore making it a legitimate target for Turkey. The spokesperson stated that the information obtained from the ground shows that there were efforts to build a region similar to Qandil.

Earlier on Tuesday, Iran-backed pro-Assad militias retreated back to regime-controlled areas after the Turkish military started shelling a convoy as a warning, which was 10 kilometers from entering Afrin to fight alongside the PKK terror organization's Syrian affiliate the YPG.

Touching on the Russian foreign minister's statements calling Turkey and Damascus to have a dialogue, Kalın stated that there has not been direct contact with the Syrian regime. He added that there might be indirect contacts to find a solution for some issues. Kalın reiterated that the necessary messages to the regime have been conveyed through the mechanism formed by Turkey, Russia and Iran.

Commenting on the regime's recent attacks on East Ghouta, Kalın stated that this is a humanitarian crime and the civilian casualties in the last two days cannot be acceptable.

The government rejects engaging in dialogue with the Assad regime due to its oppressive policies culminating in the Syrian civil war since 2011, leading to the deaths of more than 600,000 people and causing millions to flee the country, primarily to Turkey with 3.5 million refugees.

Turkey expects concrete steps from US on YPG

In relation to the recent visit of the U.S. Secretary of State Rex Tillerson, Kalın stated that Turkey has a positive stance toward the meetings but he reiterated that Ankara expects concrete steps by the U.S. such as ousting YPG from Manbij, ending partnership with them. Kalın underlined that "Turkey does not have any unlawful requests from the U.S." He highlighted that Ankara has not seen expected policies from both the Obama and Trump administration. In order to allay the concerns of Ankara, Kalın said the extradition of FETÖ members should be enabled.

Turkey has repeatedly urged the U.S. to stop its military support for the PKK's Syria affiliate YPG, but to no avail. So far, the U.S. has provided 2,000 planeloads and 5,000 truckloads of weapons and ammunition to the YPG terrorists. Likewise, until the beginning of Turkey's Operation Olive Branch, YPG terrorists were under the protection of Russian troops in northwestern Syria's Afrin.