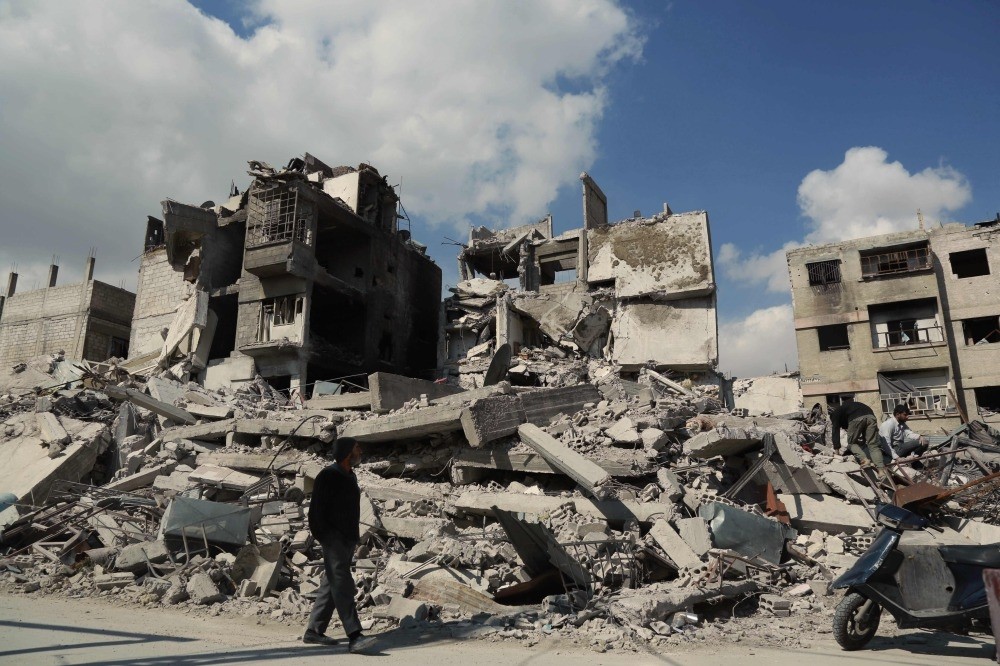 A Syrian man walks past buildings destroyed earlier in regime air strikes in the besieged opposition-held town of Douma in the Eastern Ghouta region on the outskirts of the capital, Damascus, Feb. 28.
by Şeyma Nazlı Gürbüz Mar 02, 2018 12:00 am

According to experts, the UNSC cease-fire resolution does not apply to Turkey's Operation Olive Branch since Turkey is not a party in the civil war and fights against terrorists in Afrin, which Ankara says, is excluded from the resolution

The U.N. Security Council (UNSC) cease-fire resolution to put an end to the humanitarian crisis in Syria's Eastern Ghouta and elsewhere does not include Turkey's Operation Olive Branch since the resolution excludes the fight against terrorism, which Turkey is carrying out in Syria's northwestern region of Afrin by aiming to eliminate the PKK-affiliated People's Protection Units (YPG), experts have said. The belated call for a cease-fire, announced on Feb. 24, has failed to put a concrete end to the Syrian regime's bombing of Eastern Ghouta and has led to criticism of Turkey for continuing Operation Olive Branch, claiming that the truce covers the entirety of the country and, as a result, Turkey should end its operation immediately. "In the resolution, the term 'parties to the civil war' is important. It does not include Turkey since it is not a party in the civil war," Can Acun, a Middle East expert, said. "Besides," he added, "in the resolution, the fight against terrorism is also excluded from the scope of the cease-fire. Therefore, the only reason for this criticism is to put Turkey in a difficult situation since legally Turkey does not have any obligation to finish the operation."

A professor of international relations, Nurşin Ateşoğlu Güney, from Bahçeşehir Cyprus University, said the criticism is groundless and a way to support terrorism since the U.N. resolution clearly defines its purpose and the areas that it covers.

"There is a malicious intention behind this criticism," Güney said.

"In order to protect the People's Protection Units, they try to create an implication that the cease-fire decision for Eastern Ghouta, which should have been done long before, applies to all of Syria."

The UNSC resolution demands a 30-day cease-fire in Syria to allow humanitarian aid deliveries and medical evacuations with the support of Bashar Assad ally Russia after a flurry of last-minute negotiations. The U.N. decision was made as warplanes continued to pound Eastern Ghouta, the last opposition enclave near the Syrian capital, for a seventh straight day. U.N. Secretary-General Antonio Guterres appealed last week for an immediate end to the military activities there, which have killed more than 500 civilians, 127 of whom were children.

Turkey's Western allies, particularly the United States, have been accused of using the cease-fire resolution to criticize Turkey's Operation Olive Branch, which was launched on Jan. 20 to remove the YPG from Afrin in northwestern Syria.

Recently, U.S. State Department spokeswoman Heather Nauert said that Turkey should "go back and read" the U.N. resolution, in response to a question concerning Ankara continuing its operation in Afrin.

"This statement is completely baseless and shows that [the U.S.] either missed the focal point of the resolution or is trying to twist its focus," the Foreign Ministry said as a response to criticism. "The resolution calls for an immediate halt to violence and a declaration of a humanitarian cease-fire for at least 30 days in order to provide emergency humanitarian assistance and conduct medical evacuations in the wake of the worsening humanitarian situation in Syria, particularly in Eastern Ghouta," Foreign Ministry spokesman Hami Aksoy said.

Ankara and the military argue that its Afrin operation complies with international law, saying that the operation is in line with U.N. Security Council resolutions, especially No. 1624 (2005), 2170 (2014) and 2178 (2014); Article 51 on the Right of Self Defense of the U.N. Charter; and respect for Syria's territorial integrity. The military has also said the "utmost importance" is being placed on not harming civilians.

Aksoy added that the U.S. "should focus on stopping [Assad] regime attacks on innocent civilians instead of making statements that support terrorists," since the U.N. resolution has failed to accomplish its initial aim so far.

Similarly, a French presidential office statement said that "the humanitarian truce applied to all of Syria, including Afrin, and should be implemented everywhere and by all without any delay to stop the spiral of violence in progress." However, Turkey dismissed the statement, arguing that Afrin was not addressed in the same context during talks between President Recep Tayyip Erdoğan and French President Macron.

The U.N. resolution first reiterates its "grave distress" at the continued severity of the devastating humanitarian situation in Syria, "including in Eastern Ghouta, Idlib Governorate, Northern Hama Governorate, Rukhban and Raqqa." It calls on all parties to "immediately lift the sieges of populated areas, including in Eastern Ghouta, Yarmouk, Foua and Kefraya," while affirming that "that the cessation of hostilities shall not apply to military operations against the Islamic State in Iraq and the Levant (ISIL, also known as Da'esh), Al Qaeda and Al Nusra Front (ANF), and all other individuals, groups, undertakings and entities associated with Al Qaeda or ISIL, and other terrorist groups, as designated by the Security Council."

Turkey has said that the cease-fire is meant to give relief to civilian areas hit hard by Assad regime airstrikes and has nothing to do with Turkey's counterterrorist operation in Afrin. Despite that the cease-fire meant to provide respite from the barrage of Syrian regime attacks, however, regime forces clashed with opposition groups on the outskirts of Eastern Ghouta after the resolution.

According to Güney, the international community deliberately overlooks some of the main aspects of the operation. "This is a legitimate operation. First of all, the Turkish military does its best to avoid civilian casualties. The cooperation with NGOs like the Red Crescent and AFAD [Disaster and Emergency Management Presidency of Turkey] proves this. Other than that, Afrin residents who had to leave their homes due to terrorists' pressure will be able to return thanks to this operation," Güney said.

"Turkey is also focusing on Daesh. We are also fighting it in the region, but we can't accept such an illogical idea that terrorist groups that the U.S. isn't focused on can't be countered," he said. Bozdağ further said that it will not affect Turkey's Operation Olive Branch, as the cease-fire "doesn't apply to it." He also hit out at the U.S. State Department spokeswoman who proposed that Turkey should reread the U.N. cease-fire resolution again, suggesting that it applies to the Afrin operation, as well.

"Our interpretation is clear," he said, adding that "it would be useful" for the U.S. to read the resolution more carefully. Last week, Prime Minister Binali Yıldırım also said the cease-fire resolution does not apply to Turkey's Operation Olive Branch in Afrin, which is meant to "clear out bloody terrorist groups to rescue the civilians living there."