Siege of Afrin will begin after capture of Jandaris, Maydanki Dam, Erdoğan says 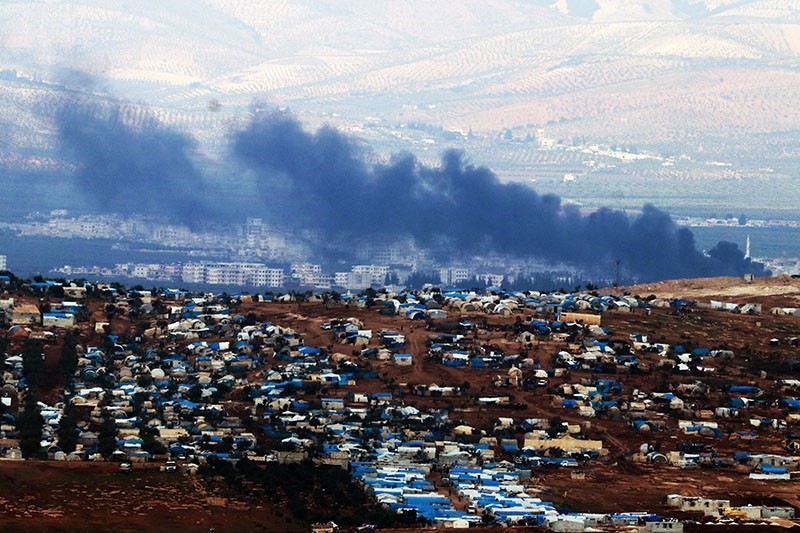 Turkish forces and the Free Syrian Army (FSA) fighters have advanced around Maydanki Dam, of critical importance for limiting the terrorists' ability to move and control the Afrin area and soon the town of Jandaris will also be cleared, opening the way for the siege of Afrin, President Recep Tayyip Erdoğan said Tuesday.

Addressing the ruling Justice and Development Party's (AK Party) parliamentary group, Erdoğan said that so far, over 700 square kilometers of land have been cleared from PKK-affiliated People's Protection Units (YPG) terrorists and brought under control. He added that 2,872 terrorists have been neutralized, while 41 soldiers from the Turkish Armed Forces and Turkish gendarmerie and 159 FSA fighters have fallen.

The Turkish Armed Forces (TSK) also stated Tuesday that at least 2,872 terrorists have been "neutralized" since the beginning of Operation Olive Branch in Syria's Afrin on Jan. 20.

The military uses the term "neutralized" to refer to terrorists killed, captured alive or the ones who surrender during the operations. The term is generally used for terrorists who were killed in operations.

Later in the day, two more villages were also cleared of YPG terrorists. One of the villages, Tall Hamu is near Jandaris in the south and the other village, Matinli is up in the north, near Sharanli.

Since the launch of the operation, 145 locations, including 114 villages, 30 strategic areas and two YPG bases have been liberated.

On Feb. 26, a crescent-shaped corridor, stretching along northwestern Idlib province and Aleppo province's Azaz district, cut off the YPG's connection to the Turkish border.

In addition, the centers of Bulbul, Raju, and Sheikh Hadid towns have been captured while clashes on the way to Jinderes are ongoing. The ultimate target is to also clear the Afrin town center held by the YPG.

Operation Olive Branch was launched by Turkey on tp remove the PKK/PYD/YPG/KCK and Daesh terrorists from Afrin in northwestern Syria.