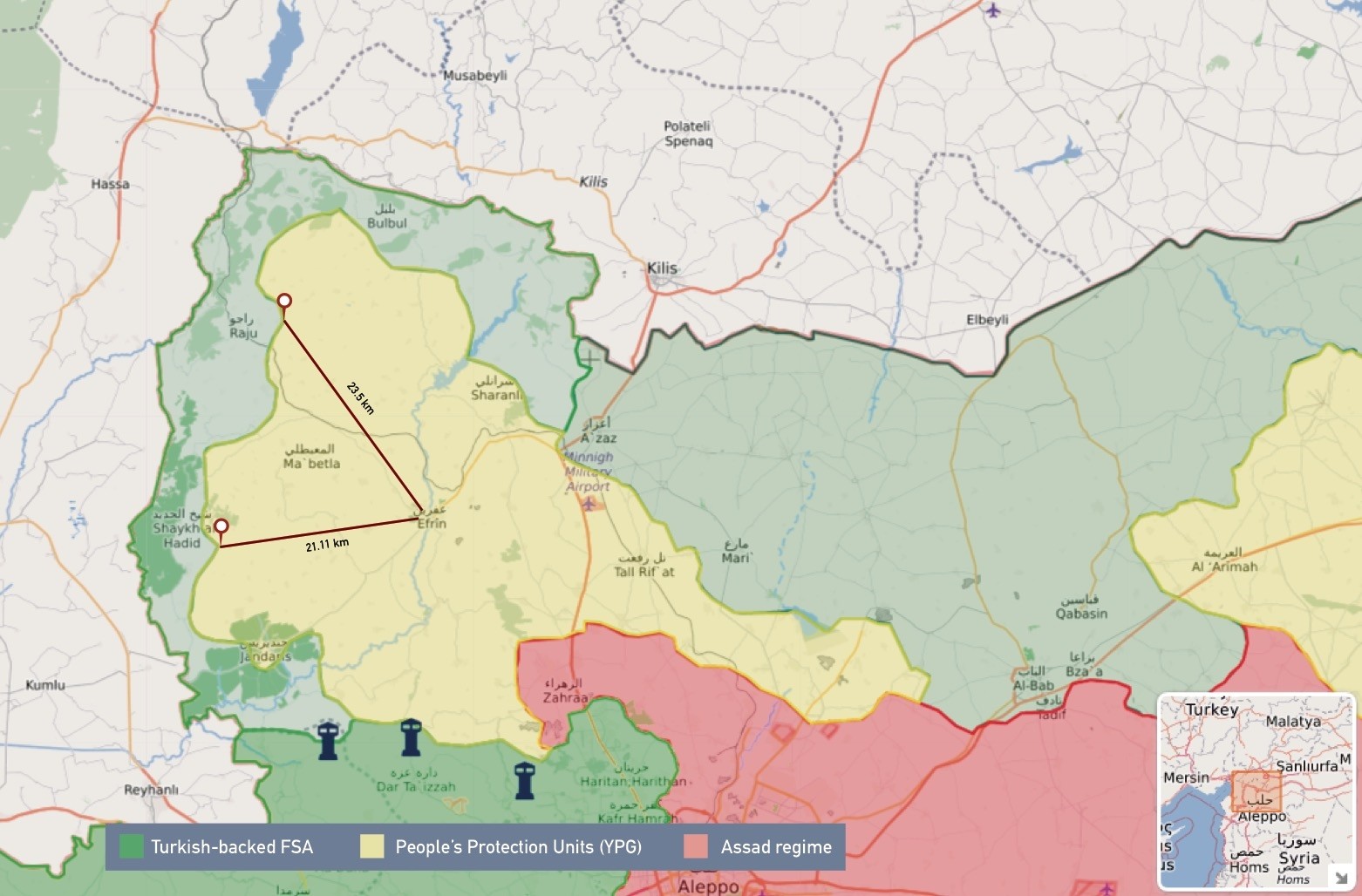 The TSK and FSA have liberated nearly half of Afrin from YPG terrorists as the operation focuses on urban warfare, now circling Afrin's center to eject PKK-affiliated groups from towns

The advance of the Turkish military and Free Syrian Army (FSA) toward Syria's Afrin as a part of Operation Olive Branch from multiple fronts was expedited as the forces focused on liberating the remaining urban centers to completely encircle Afrin's town center. The Turkish army and the FSA also continue to liberate villages, defusing explosions and mines placed by the People's Protection Units (YPG) to deter Operation Olive Branch forces and prepare a convenient environment for civilians fleeing from the town because of the terrorist groups' oppressive policies. Infrequent clashes are still ongoing to sweep remnants.

A TSK statement Monday said that the villages of Ballursanik and Alyiji located west of Afrin's Maydanki Dam were liberated from YPG terrorists. At least 2,795 terrorists have been killed in the operation. "Half of the region that was included under the scope of the operation has been brought under control so far. The operation continues as planned," Deputy Prime Minister Bekir Bozdağ said yesterday. He added that since the launch of the operation on Jan. 20, the Turkish military and the FSA liberated 147 locations including three town centers, 112 villages, 30 strategic mountains and hills and two YPG bases.

"We are the only country that fights against Daesh," Bozdağ further emphasized, while adding that Turkey has launched this operation to protect civilians. It is expected that the Turkish army and FSA are now bound to Jandaris town in western Afrin. The strategic points around the town were liberated and the operation to eject YPG terrorists is reportedly imminent. Paramilitary groups backed by the Assad regime and Iran arrived last month, however, whether their presence in the town still continues is not known, as they suffered from heavy casualties last week as a result of Turkish airstrikes. The distance to Afrin would be reduced to about 15 kilometers after the liberation of Jandaris.

"Operation near Jandaris has been carried out very sensitive since the town is the most dense settlement after Afrin's city center. Turkish army shows utmost importance to prevent civilian casualties. We know the terrorist group uses human shields," Abdullah Ağar, a security expert told Daily Sabah.

The special forces arrived after Turkish Armed Forces (TSK) announced that the second phase of Operation Olive Branch was launched to cut roads leading to Afrin and eventually encircle the town's center as well as clearing the villages of Afrin.

The JÖH and PÖH forces have substantial experience in urban warfare after having played crucial roles in clearing PKK militants from Turkey's southeastern cities between 2015 and 2016.

Ağar said that all the roads leading to Afrin center from near towns are controlled by the TSK and the FSA.

It relieves the TSK and the FSA by constraining the possibility of rocket attacks by the YPG targeting civilians in Turkish villages near the Syrian border.

The rocket attacks have killed several civilians and wounded dozens in Turkey's Kilis and Hatay provinces.