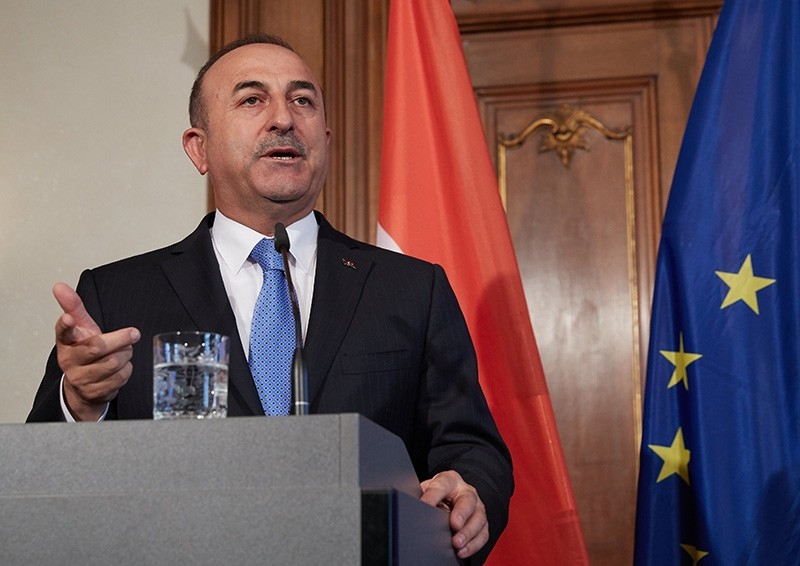 Amid the ongoing operation in Afrin, Syria, Turkey stresses the necessity of eliminating the terrorist group PKK from both Iraq and Syria, hinting at a cross-border military operation against PKK terrorists in northern Iraq jointly with Baghdad after the Iraqi elections in May.

Speaking in a joint press conference with his Austrian counterpart Karin Kneissl, Foreign Minister Mevlüt Çavuşoğlu said: "Both Syria and Iraq need to be cleared off from all terrorist groups. Otherwise the political steps that will be taken regarding a political solution would fail."

Çavuşoğlu stressed that mutual steps will be taken against terrorists after the election in Iraq as both sides agreed on the issue in previous high-level meetings. The joint steps to be taken against the PKK were discussed during Iraqi Prime Minister Haider al-Abadi's visit to Ankara and Çavuşoğlu's visit.

Underlining that Iraq has achieved essential achievements against Daesh with international support, Çavuşoğlu said, "However, during this period the PKK infiltrated into cities from Qandil and other mountains." He added that both the Iraqi central government and the Kurdistan Regional Government (KRG) would not feel secure because of the existence of terrorist groups within Iraq.

During Abadi's visit, President Recep Tayyip Erdoğan pointed to the activities of the PKK in Iraq, which used the fight against Daesh for its own benefit. Erdoğan underlined that the PKK continues its existence in the Qandil and Sinjar regions. He highlighted that Turkey is ready for a joint fight against the terrorists and will provide all necessary means to Iraq to recover from its fight against Daesh.

Touching on Turkey's Afrin operation, Çavuşoğlu said the critical part has been completed and the mountainous regions have been captured from the terrorists. Turkish Armed Forces (TSK) and Free Syrian Army (FSA) fighters liberated Jandaris town center Thursday from the PKK-affiliated People's Protection Forces (YPG), leaving only the Afrin town center as a large settlement in the hands of the YPG.

"We are advancing toward Afrin. When we arrive in Afrin, we need to be more careful to avoid affecting civilians," Çavuşoğlu said. He underlined that the TSK is targeting terrorists and using the utmost care to not harm civilians.

Referring to the Afrin operation, the foreign minister said the operation is expected to be completed in May and added that, "Turkey has the capacity to carry out both operations simultaneously," indicating that the country will not wait until the anti-terror operation in Syria is complete to start the operation in Iraq.

Turkey launched Operation Olive Branch in Afrin on Jan. 20 with an aim of eliminating terrorist groups along its Syrian borders. Afrin has been a major hideout for the YPG and the PKK since July 2012 when the Bashar Assad regime in Syria left the city to the terror group without putting up a fight.

The Turkish General Staff stressed that the operation is being carried out under the framework of Turkey's rights within international law, U.N. Security Council resolutions, its right to self-defense under the U.N. charter and with respect for Syria's territorial integrity.

The operation in Afrin — bordering Turkey's Hatay and Kilis provinces — was widely expected in the wake of Turkey's Operation Euphrates Shield in northern Syria, which cleared Daesh terrorists from Turkey's border between Aug. 24, 2016 and March 2017.

Çavuşoğlu also highlighted that the significance of completing the operation as early as possible would enable the return of civilians and provide stability as Turkey's Operation Euphrates Shield achieved. Çavuşoğlu said with Operation Euphrates Shield, over 100,000 Syrians in Turkey returned to the regions cleared from terrorists, and nearly 150,000 Syrians from other provinces of Syria were able to settle in these regions living in a peaceful environment..

Meanwhile, Çavuşoğlu also said that Turkey has sent a diplomatic note to Sweden for the provisional arrest of terrorist PKK-linked PYD's former co-chair Salih Muslum, who is currently in Stockholm.

Muslum was briefly detained in the Czech Republic but was later released by a court, despite Turkey's request for his provisional arrest and extradition for terror charges. He was then spotted in Germany attending a pro-PKK rally.