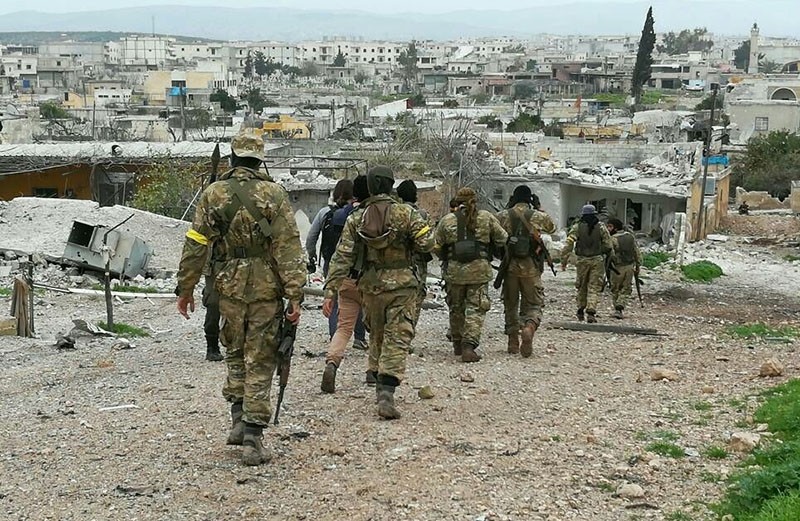 The liberation of Jandaris leaves only central Afrin, as a large urban settlement, in the hands of YPG terrorists.

Turkey-backed Operation Olive Branch reportedly reached Jandaris Wednesday and was met by YPG elements stationed in the town. After a day of clashes, the terrorist defenses collapsed and the Turkish forces assumed full control of the town, which is less than 20 kilometers away from central Afrin.

The participation of Turkish special units, known as Turkish Police Special Forces (PÖH) and Gendarmerie Special Forces (JÖH), in Operation Olive Branch has given Turkey some significant advantages in urban warfare, as was apparent in the liberation of two large urban centers in close successions. Prior to Jinderes, Afrin's Raju, Sharanli and Sheikh Hadid towns, and strategic Mount Bafelyun and Maydanki Dam, was cleared of terrorist elements.

Deputy Prime Minister Bekir Bozdağ said Monday that "almost half of the region targeted in Operation Olive Branch is now under our control. The operation continues as planned."

According to a Turkish Armed Forces (TSK) statement published Thursday at least 3,055 terrorists have been killed in the operation so far.

The day marked the 48th day of the anti-terror operation and 115 terrorists have been killed in the past 24 hours, the military said.

Since the launch of Operation Olive Branch on Jan. 20, the Turkish military and the FSA have liberated 157 locations, including five town centers, 122 villages, 30 strategic areas, and one YPG/PKK base.

According to the Turkish General Staff, the operation aims to establish security and stability along the Turkish-Syrian border and in the region as well as to protect the Syrian people from the oppression and cruelty of terrorists.

Turkey is carrying out the operation as it exercises its right of self-defense within the jurisdictions of international law, U.N. Security Council resolutions and the U.N. charter, with full respect for Syria's territorial integrity.