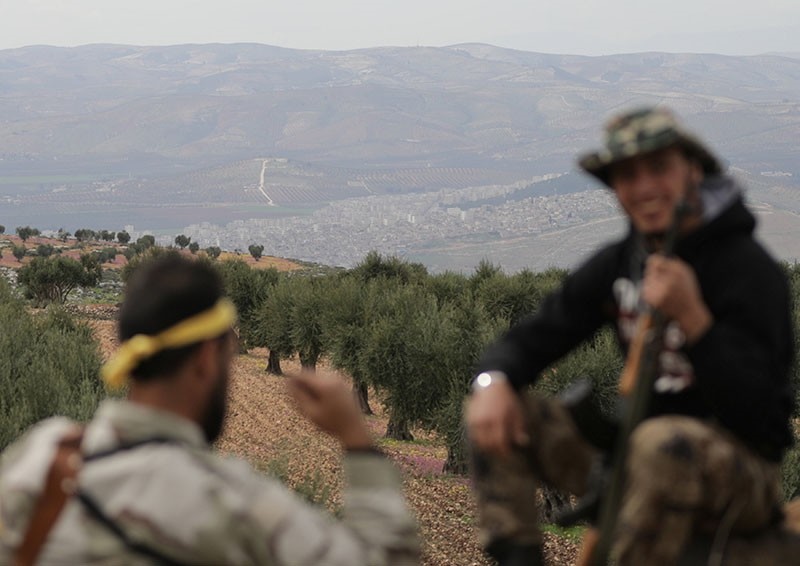 According to Anadolu Agency correspondents on the ground, Turkish troops and the FSA cleared the villages of Qeretepe and Qastel Kisk in Sharran, northeast of the city of Afrin, as well as the villages of Khalidiah and Jalbul near the region's center, and the village of Ka'n Kurk in the Jindires district.

The latest advancements of Turkish troops and FSA fighters brought the front line only two kilometers away from Afrin's town center.

During their advance, YPG/PKK terrorists also captured the base of the terrorist group's so called special forces known as the HAT after brief clashes. The base, located two kilometers northeast of Afrin town center, was formerly used as a Syrian Army base before regime forces withdrew from the region without a fight in 2012.

Numerous vehicles and ammunition was seized by the FSA.

HAT elements are known to have been trained by the U.S. in bases west of Euphrates River.

"To date 950 square kilometers have been taken under our control," President Recep Tayyip Erdoğan told the 6th provincial congress of the ruling Justice and Development Party (AK Party) in the Black Sea province of Bolu.

Erdoğan said that the ongoing operation is not to "occupy" the region but to liberate it from YPG/PKK and Daesh terrorists, and then hand it over to the people living there.

"In the Afrin region, the owners of the [liberated] lands have started to come back," he said.

Erdoğan added that a total of 3,300 YPG/PKK and Daesh terrorists have been "neutralized" in Afrin since the start of Operation Olive Branch in northwestern Syria.

A total of 3,291 terrorists have been "neutralized" since the start of Operation Olive Branch in Syria's northwestern Afrin region, the Turkish General Staff also said in a statement on Sunday morning.

Erdoğan said that Turkey shares a 911-kilometer (566-mile) border with Syria, adding that it has been harassed by both terrorist groups and the Syrian regime.

"With these things happening in Syria, when will you, NATO, take our side?" he said.

In mid-February, Turkey marked 66 years of NATO membership. Under NATO charter, an attack on one of the alliance's members is an attack on them all. Turkey says that is also defending NATO's southern borders through Operation Olive Branch, but the alliance has failed to support it.

On Jan. 20, Turkey launched the operation to clear YPG/PKK and Daesh terrorists from Afrin, northwestern Syria.

According to the Turkish General Staff, the operation aims to establish security and stability along Turkey's borders and the region as well as protect Syrians from the oppression and cruelty of terrorists.

The military also said only terror targets are being destroyed and "utmost care" is being taken to not harm civilians.