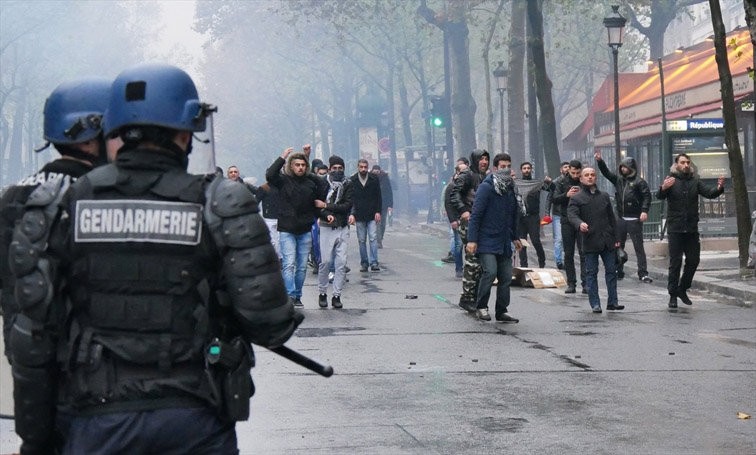 In a separate statement by the European radical leftists on their noblogs.org site, PKK-YPG supporters were called to start their attacks today, March 12.
by Mehmet Solmaz Mar 12, 2018 12:00 am

With only days left for its Syrian wing YPG to go down in defeat by Turkish forces and the FSA in Afrin, the PKK called on supporters of the group for brutal attacks across Europe, including Turkish embassies, banks, defense companies, courts and police stations among others

As the Turkish army and the Free Syrian Army (FSA) liberated more than half of Afrin – a district in northern Syria held by the PKK's Syrian wing People's Protection Units (YPG) – the terrorist group released several statements in which it vowed to attack Turkish institutions, business, individuals, and European banks and offices of major German political parties. A joint statement by the radical European leftists and the Apoist Youth Initiative Europe (AGİA), the terrorist group said, "If no one wants to listen to us, we will put every single city of Europe to ashes. No matter how and no matter what is burning on this day, Europe must understand that we will not let Afrin fall."

Calling supporters to carry out "more radical and organized actions, in the heart of capitalism," the statement called for attacks in Europe on Turkish embassies, the Union of European Turkish Democrats (UETD), Turkish individuals and their business premises, state institutions, offices of the Germany's ruling Christian Democrats (CDU), the Social Democrats (SPD), police stations and courts. In his Twitter account, Dean Parker, an American volunteer of the YPG terrorist forces, also called on the group's supporters to attack Turkish diplomatic representatives around the world.

"Burn them all down! Time for peaceful protests are over," he tweeted.

The AGİA statement was released at around the same time with the YPG released its official international statement, in which the terrorist group said, "The game is now on and the battleground is the entire world now." The propaganda filled long statement ends with "Biji Serok Apo," which means "Long Live Apo," in reference to the imprisoned leader of the PKK–Abdullah Öcalan.

In a separate statement by the European radical leftists on their noblogs.org, PKK-YPG supporters were called to start their attacks today, March 12.

"Burning Turkish consulates, sabotaging armaments companies and mass militant actions against the symbols of capitalist and imperialist rule will break the silence and make the atrocities of Turkish fascism no longer ignorable."

Under a "fight4afrin" sub blog on the portal, the group listed "Direct Actions in solidarity with Afrin resistance until now" and claimed dozens of attacks on mosques, individuals, nongovernmental organizations across Europe since the Afrin operation started.

The Geylani Service Foundation, a Kurdish religious center in Rotterdam, Netherlands, is among the listed attacks with a title of "An association of Turkish fascists was attacked."

In a category called "Targets," the group listed companies from the European weapon industry, major banks in Europe, such as the ING, BNP, Deutsche Bank, Lloyds and AXA; addresses of the Turkish diplomatic representations in major European countries and Turkish cultural centers and other nongovernmental organizations.

Expressing her frustration for the lack of international support to the terrorist group in Afrin, the PYD's Hediye Yusuf said the situation in Afrin is "worrisome" for the YPG and called on supporters to "occupy Turkish and Russian consulates and embassies" around the world.

Her statement came a day after giving an interview to a pro-PKK media outlet, in which she mocked the Assad regime, which refrained from clashing with the Turkish army in Afrin.

"The regime is weak, if they weren't, they would have stopped Turkey in Jarablus and al-Bab," she said, referring to Turkey's military operation that liberated apart of northern Syria from the Daesh terrorists.

Yusuf also picked on Russia and accused Moscow with "inflaming" the Turkish offensive in Afrin.The PKK-YPG's youth group AGİA, which has held hundreds of demonstrations across European cities prior to the Afrin operation, announced in October that it will carry out revenge attacks on Turkish institutions and establishments with links to the ruling Justice and Development Party (AK Party) and the Nationalist Movement Party (MHP) in Europe. The terrorist group then claimed that neither "the capitalist modernity of Europe nor any fascist structure" will be able to stop the planned terrorist attacks. The statement, which was released on the Netherlands-based PKK media outlet ANF, defined all European cities as "resistance zones" where the militant group will start its "indefinite activities."

Time to clamp down on the PKK-YPG threat in Europe

The European Union has faced some heavy criticism for its apparent lack of concern over the PKK's acts of terrorism in Turkey and the group's activities in Europe. In addition to complete tolerance of the PKK in EU member states, some countries took certain steps Ankara called "scandalous."

"Tonight, we are demonstrating for you with the mission 'Freedom for Öcalan – Peace in Kurdistan,'" the tweet read.