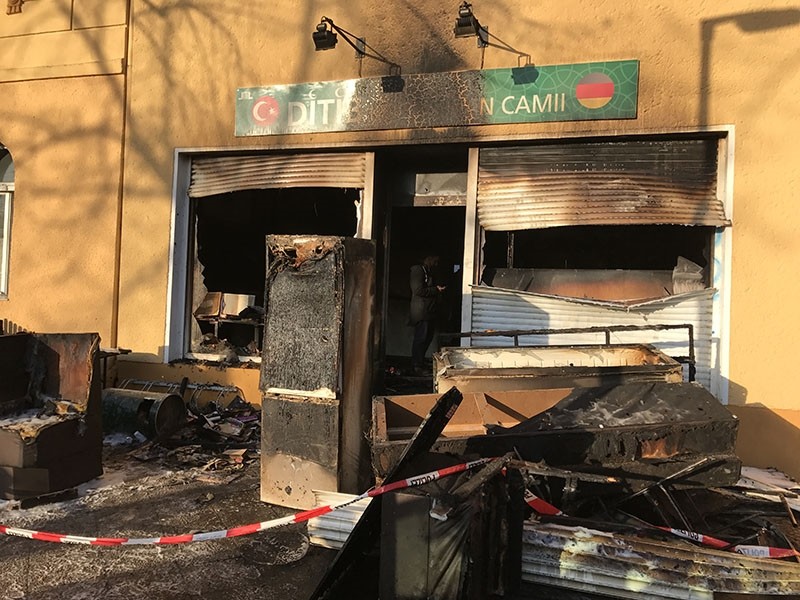 PKK terrorist group sympathizers continue to create distress in European cities, as Turkey advances in its Operation Olive Branch against the terrorist organization's Syrian affiliate People's Protection Units (YPG), aiming to take revenge on Turkey and the whole of Europe.

In addition to carrying PKK and YPG flags, they also held signs condemning Turkey and Operation Olive Branch. Clashing with police many times, the PKK supporters ignored warnings from police and caused people to leave out of fear. Because of the incident, the Piccadilly train station in Manchester shut down for three hours.

"The ones who were involved with the events that took place after noon will face heavy investigation, detention and judgement," transportation officer Mark Cleland said.

The incident received criticism from the British social media users as well. "#PKK agitators have disrupted the rail lines in Manchester to demand #Britain do more to help their fight against #Turkey," said Kyle Orton, a Middle East expert, on his Twitter account.

"No word from @GMPolice on the flying of the PKK's flag during the protest at Manchester Piccadilly, despite the PKK being one of the oldest proscribed organizations in the UK. HT @cannychad for the third image showing the flags being flown," said Alexander J. Martin, who is a technology reporter at Sky News, criticizing the police force for being ineffective.

Meanwhile, the Foreign Ministry released a statement on the recent attacks against Turkish mosques by PKK supporters in Germany on Sunday, in which it said it expects Berlin to find the perpetrators of the attacks.

"We follow with concern the increasing attacks on Turkish mosques in Germany by racist, anti-Islam factions and the PKK terrorist organization," the statement said.

The ministry warned there should be no tolerance for the PKK and urged German authorities to take steps to prevent similar attacks in the future.

A PKK statement that similar attacks will continue and the responsibility it claimed for the attack in Lauffen am Neckar shows the real face of the terror organization, the ministry said.

A joint statement by the radical European leftists and the Apoist – followers of Öcalan – Youth Initiative Europe (AGİA), said: "If no one wants to listen to us, we will put every single city of Europe to ashes. No matter how and no matter what is burning on this day, Europe must understand that we will not let Afrin fall." Calling supporters to carry out "more radical and organized actions in the heart of capitalism," the statement called for attacks in Europe on Turkish embassies, the Union of European Turkish Democrats (UETD), Turkish individuals and their businesses, state institutions, offices of Germany's ruling Christian Democratic Union (CDU), the Social Democratic Party (SPD), police stations and courts. On his Twitter account, Dean Parker, an American volunteer in the YPG, also called on the group's supporters to attack Turkish diplomatic representatives around the world.

"Burn them all down! Time for peaceful protests are over," he tweeted.

The AGİA statement was released at around the same time the YPG released an official international statement that said: "The game is now on and the battleground is the entire world now."