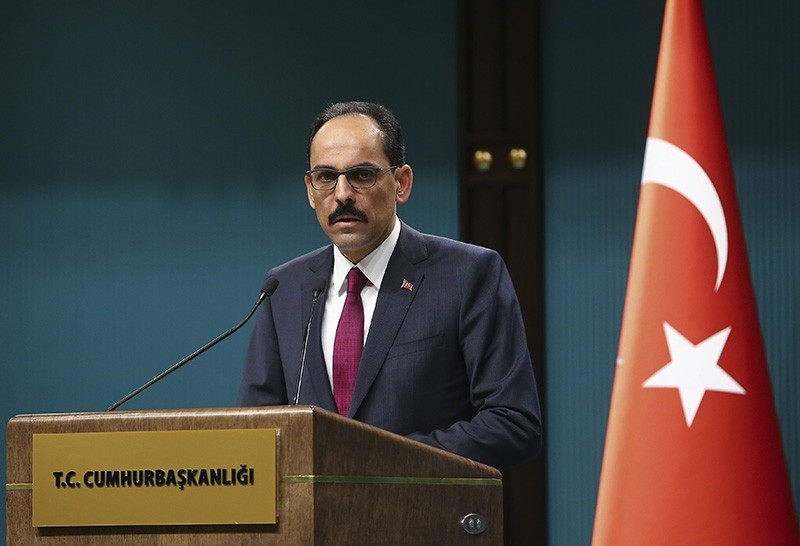 Security has been completely established in up to 70 percent of Syria's Afrin as a result of Operation Olive Branch and Turkey expects the town center to be cleared of terrorists very soon, Presidential Spokesperson Ibrahim Kalın said Thursday.

Speaking on a live interview on TRT Haber news channel, Kalın said that the PKK-linked People's Protection Units (YPG) terrorists were planning to turn Afrin into another version of Qandil, which is the terrorist group's headquarters in Iraq. Such a threat has been fully eliminated, he said.

He noted that over 150,000 people returned to areas liberated from Daesh in Operation Euphrates Shield in northern Syria and that such a return had never taken place anywhere in Syria after clashes ended.

"Locals do not return to areas controlled by the YPG, not in Manbij, Tal Abyad or Ayn al Arab [Kobani]" Kalın added.

The presidential spokesperson also said that Turkey has no intention of handing Syria's Afrin to the Assad regime after Operation Olive Branch is completed.

Turkey launched Operation Olive Branch on Jan. 20 to remove the PKK/PYD/YPG/KCK and Daesh terrorists from Afrin in northwestern Syria, which pose a serious threat to the country's national security as they are located on the border between the two countries.

Kalın also touched upon the Manbij issue, saying that the U.S.-Turkey deal is still binding.

"The deal will not change due to change of secretary of state," Kalın said, in reference to Trump's replacement of Rex Tillerson with CIA Director Mike Pompeo.

However, he noted that Pompeo is not well-informed on the issue and it will take one to two weeks for him to have a full grasp of the Manbij roadmap.

Turkey and the U.S. had agreed to oversee the withdrawal of YPG terrorists from Manbij and establish a joint mechanism following the departure of the terrorists.

The presence of the YPG, which is the armed wing of the Democratic Union Party (PYD), in Manbij had turned into a dispute between Ankara and Washington after the U.S. administration failed to keep its promises that the YPG would move east of the Euphrates. Manbij is also one of the areas in Syria where U.S. troops are present to support the YPG.

The YPG's ultimate aim is to establish an autonomous region in northern Syria by connecting northwestern Afrin to the Kobani and Jazeera cantons in the northeast.

Turkish officials say that the PKK, a group listed as a terrorist organization by the U.S. and the EU, is organizationally linked to the YPG.