Control of Afrin to be handed to locals once YPG expelled 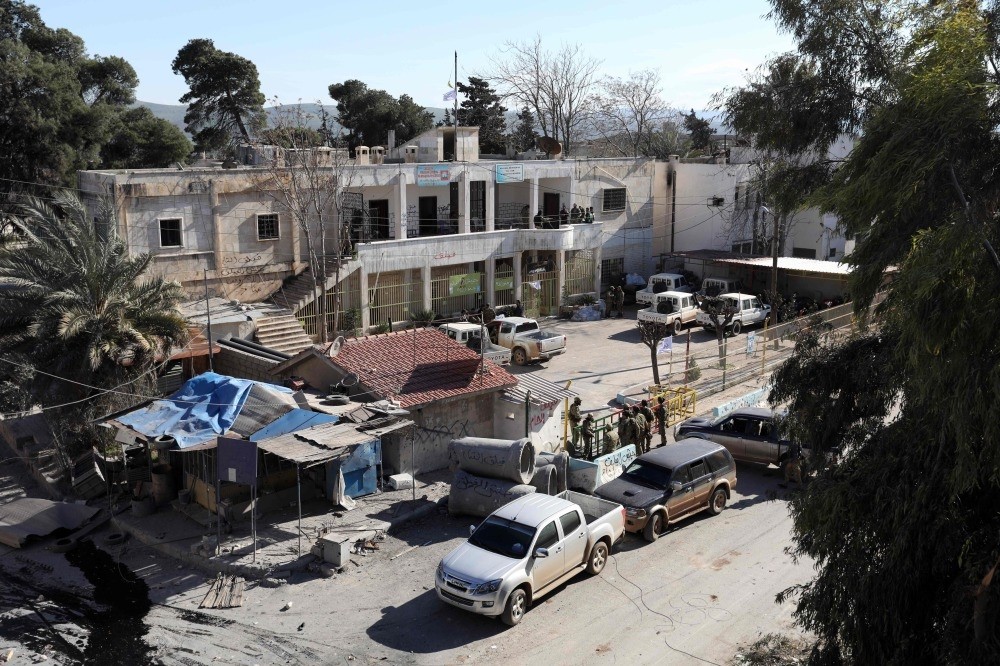 Turkish-backed Free Syrian Army members gather in a local council building in the town of Jinderes, recently liberated from the YPG, March 9, 2018.
by Mustafa Kırıkçıoğlu Mar 16, 2018 12:00 am

Turkey is shaping a plan to determine the administrative structure in Syria's Afrin for the post-PKK period as Operation Olive Branch's goal of rooting out terrorists from the town reaches its final stages.

Presidential Spokesperson Ibrahim Kalın said yesterday that Turkey's main priority is to establish a local government "just as in the areas liberated with Operation Euphrates Shield," rejecting claims of possibly handing over the town to the Bashar Assad regime after it is cleared of the PKK-affiliated People's Protection Units (YPG).

"There will be pressure on Turkey to hand Afrin over to the Assad regime once it is cleared, and Turkey will definitely avoid these voices. Otherwise, the legitimacy of the operation would be questioned," professor Hüsamettin İnaç, head of political science and international relations at Dumlupınar University, said. He added that the planned administration for governing Afrin will be similar to the council established in the areas cleared by Operation Euphrates Shield.

An administration was established with the participation of locals in the areas cleared of Daesh, including al-Rai, Jarablus, al-Bab and Azez, through Operation Euphrates Shield, which was carried out against Daesh and successfully completed last year. It administered a normalization process in the post-Daesh period as regular security forces were formed, and managed projects on education, infrastructure and economy.

The Assad regime tried to curb Turkey's Operation Euphrates Shield and was backed by Iran in this respect. They sent paramilitary groups to fight in the ranks of the YPG against the Turkish Armed Forces (TSK), but suffered heavy losses due to airstrikes by the Turkish Air Forces. The denouement of the remaining forces is unknown.

"Thousands of Kurds, Arabs and Turkmens fled from YPG persecution. They will return to Afrin," Kalın said, adding that security has been completely established in up to 70 percent of Syria's Afrin as a result of Operation Olive Branch, and Turkey expects the town center to be cleared of terrorists very soon.

İnaç said unlike Operation Euphrates Shield, Ankara may face two main drawbacks in Afrin. "Contrasting with Daesh, the YPG is not seen as a terrorist group by other countries, even being overtly supported by some powers. This could create some obstacles for Ankara during operation. Second, Iran is disturbed due to Turkey's increasing influence. They also will try to hinder the advance of Olive Branch forces," he said.

Turkey launched Operation Olive Branch on Jan. 20 to remove YPG terrorists from Afrin in northwestern Syria. The YPG poses a serious threat to the country's national security as they are located on the border between the two countries.

The presidential spokesperson said YPG terrorists were planning to turn Afrin into another version of Qandil, which is the terrorist group's headquarters in Iraq. "Such a threat has been fully eliminated," Kalın said.

"The YPG knows very well that they cannot stand against the TSK. They will resort to a propaganda war and likely to use human shields to draw the world's attention to the region," Çetiner Çetin, a journalist from Habertürk daily focusing on the region, said.

PKK and YPG sympathizers often use images taken in another parts of Syria and claim they are from the Afrin offensive. Former leader of the YPG's political wing, the Democratic Union Party (PYD), Salih Muslum, used photos from the opposition-held Damascus suburb of Eastern Ghouta, which has been besieged and attacked by the Assad regime since the outbreak of the Syrian civil war, in a news conference in the Belgian capital of Brussels on Feb. 19. It was not the first time he shared fake photos, as he retweeted a photograph in January on his Twitter page to defame Turkey by showing injured children with the message: "Turkey massacres in Afrin." However, it was later revealed that the photograph taken Sept. 14, 2014 was from Eastern Ghouta, then struggling under a crippling siege by the Assad regime. The photograph showed three children and a baby who were injured after an air attack by regime forces in the Douma district of Eastern Ghouta.

Kalın also noted that over 150,000 people returned to areas liberated from Daesh in Operation Euphrates Shield in northern Syria and that such a return had never taken place anywhere in Syria after clashes had ended. "Locals do not return to areas controlled by the YPG, not in Manbij, Tal Abyad or Ayn al-Arab [Kobani]" Kalın added.

Prior to the Afrin operation, the TSK launched Operation Euphrates Shield against Daesh to neutralize terrorist elements in al-Bab, al-Rai, Dabiq and Jarablus. Turkey cleared the area and substantially contributed to the rebuilding process, enabling the return of Syrians in the areas cleared in the operation. The operation cleared 1,900 square kilometers of Daesh, allowing more than 100,000 refugees to return home.