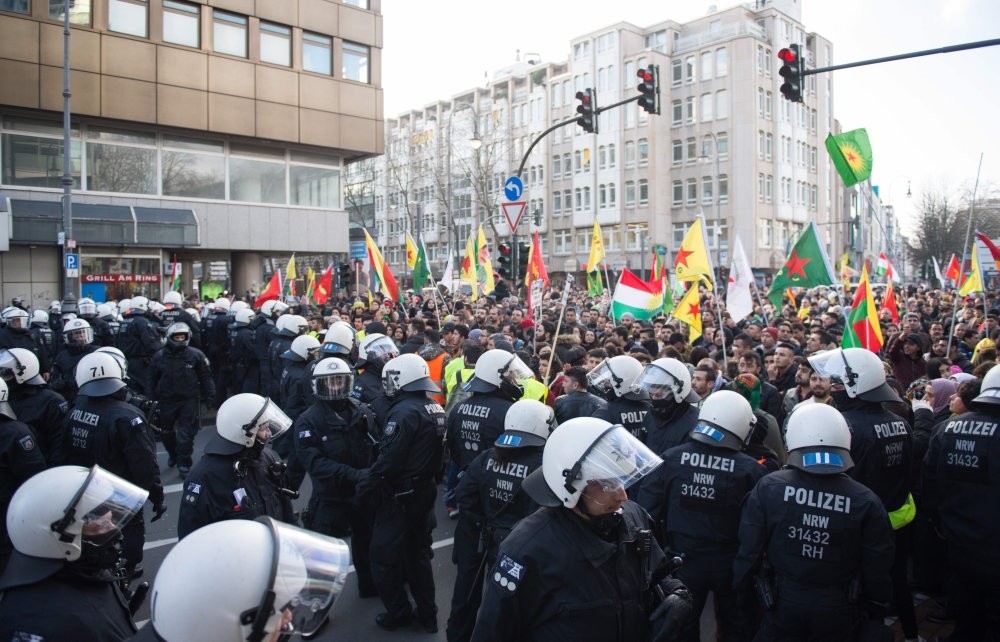 German police stop a mass demonstration in Cologne with more than 20,000 participants protesting against the Turkish military's Operation Olive Branch, Jan. 27, 2018.
by Daily Sabah Mar 17, 2018 12:00 am

The most recent violence by PKK supporters was the occupation of the German Consulate on Crete on Friday.

"A group of people entered the consulate, took down frames from the walls and put up banners. Then they left," a police spokesperson said after the German Consulate on the Greek island of Crete was briefly occupied Friday by protesters decrying Turkey's offensive in the Syrian enclave of Afrin.

A banner reading: "Resistance is life, solidarity to Afrin," was pictured hanging from the balcony of the consulate in Iraklio, Crete. The spokesperson declined to comment on reports that the protesters also damaged equipment in the consulate and made away with the German flag.

Austria also increased security measures due to the PKK threat in the country, raising the alarm level to the maximum and saying that special security for the Turkish community should be provided. Most PKK-related violence, however, occurs in Germany, a country that Ankara has long criticized for its silence on the terrorist organization.

The Democratic Union Party (PYD) and the PKK's youth wings in Europe recently threatened to carry out violent attacks against the Turkish community in Germany to protest Turkey's ongoing counterterrorism operation in the northwestern Syrian region of Afrin.

Over the last two weeks, PKK supporters have attacked a number of Turkish mosques in Germany. A mosque in Germany's northwestern city of Cologne was vandalized in the latest string of attacks targeting the country's Turkish-German community. The assailants spray-painted slogans such as "Everywhere is Afrin" on the walls of the Eyüp Sultan Mosque, run by the Turkish-Islamic Union for Religious Affairs (DİTİB).

On Monday night, PYD and PKK supporters in Berlin threw stones at a Turkish restaurant and smashed its windows. A group also attacked a Commerzbank branch on Hamburger Street in Hamburg on Sunday. A statement read: "We smashed their windows and left painted slogans. Commerzbank profits from its investments in defense companies such as Kraus-Maffei Wegmann [KMW] and from the war in Afrin." A Commerzbank branch in Lichtenburg, Berlin was also similarly attacked. Commerzbank declined to comment on the incidence when contacted by Daily Sabah. On Saturday, a webpage affiliated with the PKK and its Syrian affiliate the PYD posted video footage of an attack early Friday on a mosque in southwestern Germany.

Turkish-Kurdish tension is dangerous for Germany

"The tension between the Turks and Kurds is very dangerous for Germany," said Dr. Bernd Liedtke, a security expert, political scientist and sociologist, speaking to Deutsche Welle Turkish.

"The federal government of Germany should take more concrete steps against the crimes that are committed by the Kurds in Germany," Liedtke said. He added that determination against criminals should be clearer on the German government's part regardless of who they are.

The PKK has been banned in Germany since 1993, but it remains active, with nearly 14,000 followers among the country's Kurdish immigrant population. Turkey has long criticized Germany for not taking serious measures against the PKK, which uses the country as a platform for fundraising, recruitment and propaganda.

"They say that they understand the political ambitions of the oppressed Kurdish community. That is why they overlook the crimes that are committed by them in Germany. However, I believe this is wrong," Liedtke said. He added that he understands Ankara's criticism.

Following the attacks, the Turkish-German community has made a call to keep watch over mosques in the wake of attacks, deciding to provide security themselves as a reaction to what they have called the German government's inefficiency. The Union of European Turkish Democrats (UETD) has prepared a report on PKK and PYD supporters who, since the beginning of the Operation Olive Branch, have organized attacks against Turks in Europe. According to the report, the structures that form the European branch of the terrorist organization, spread terrorist propaganda and also carry out acts of violence under the guise of protests against Turkey's Operation Olive Branch.

Germany has a 3 million-strong Turkish-German community, many of whom are second- and third-generation German-born citizens whose grandparents moved to the country in the 1960s.

Ankara is also outraged over the increase in attacks. On Monday, the government spokesman, Deputy Prime Minister Bekir Bozdağ, said Turkey is greatly concerned about the latest PKK attacks in Germany, and expects the German government to do its utmost to ensure the safety of the Turkish community.

Still, the PKK terrorizes other European countries as well. On Monday night, some YPG supporters burned a replica of a warplane in front of the Turin-based Leonardo-Finmecanica defense company. The Italian company is in the field of military defense systems and is reportedly involved with the Turkish military for the development of surveillance systems for coastal and maritime borders, armaments, helicopters and radar systems. In another video shared on social media, a pro-YPG group is seen throwing Molotov cocktails and shooting fireworks at police outside the Turkish Consulate in Thessaloniki, Greece. Later on Tuesday, a group of YPG supporters was stopped by police in Paris before reaching the U.S. Embassy. The group clashed with police with sticks and threw objects at the officers. Videos show the crowd chanting: "Long live leader Apo," in reference to imprisoned PKK leader Abdullah Öcalan.

Protests with YPG flags and banners also took place in several British cities such as London and Bristol on Friday. On Sunday, all outbound train services came to a standstill in Manchester Piccadilly Station due to a protest staged by the YPG sympathizers. Around 100 protesters holding YPG flags entered one of the two biggest stations in Manchester before moving onto the tracks. Shouting anti-Turkey slogans, the group also carried pictures of Öcalan. All outbound trains were disrupted and some services had to be canceled.