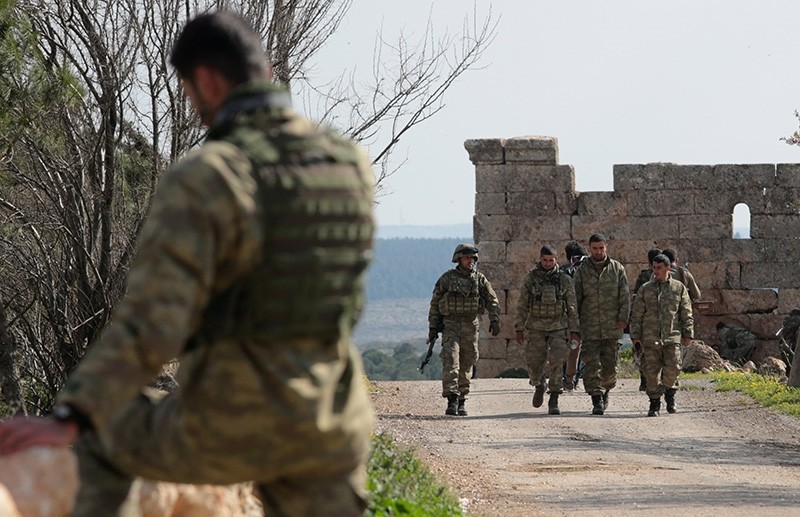 On the 57th day of the Operation Olive Branch in northwestern Syria's Afrin the Turkish Armed Forces (TSK) and the Free Syrian Army (FSA) elements moving in east to west and west to east directions north of the town center linked up, encircling PKK-linked People's Protection Units (YPG) terrorists in the area still remaining under their control.

On Saturday, 12 villages were liberated from YPG terrorists and Afrin town center was surrounded from the west, north and east, while leaving a corridor closely monitored by Turkish forces open for civilians who want to leave Afrin for regime controlled areas in further south. 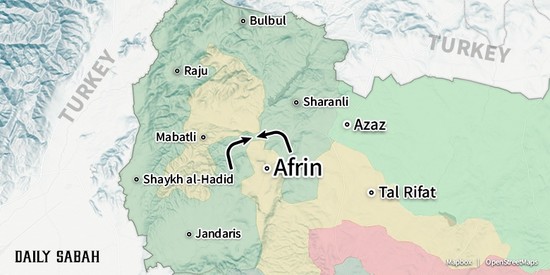 The latest advances allowed the TSK and the FSA to control the highway between Afrin and Mabatli, only towns in the region still controlled by the YPG, and encircle Afrin from three directions. The closest front line to Afrin is located some 600 meters away from the outskirts of the town, which started to be encircled last week..

President Recep Tayyip Erdoğan said Saturday that Turkey-backed troops had surrounded Afrin city center in northwestern Syria and were ready to enter at any moment.

"We are about to enter Afrin, and we may announce the good news at any time," said Erdoğan at his Justice and Development (AK) Party's 6th Annual Congress in southeastern province of Mardin.

The U.N. said Saturday that some 50,000 civilians have fled the town, despite efforts by the terrorist group to hinder their exit in a bid to use them as human shields.

An operation in Mabatli town center, the sixth town center of the region, has not been launched yet.

Since the launch of the operation, the Turkish military and FSA have liberated 270 locations, including five town centers, 224 villages, 44 strategic mountains and hills, and three YPG/PKK bases.

Meanwhile, the Turkish General Staff said in a statement on Saturday morning that a total of 3,567 terrorists have been "neutralized" since the start of Operation Olive Branch on Jan. 20.

The military also said only terror targets were being destroyed and the "utmost care" is being taken to not harm civilians.