Ankara to trace origins of YPG weapons captured in Afrin 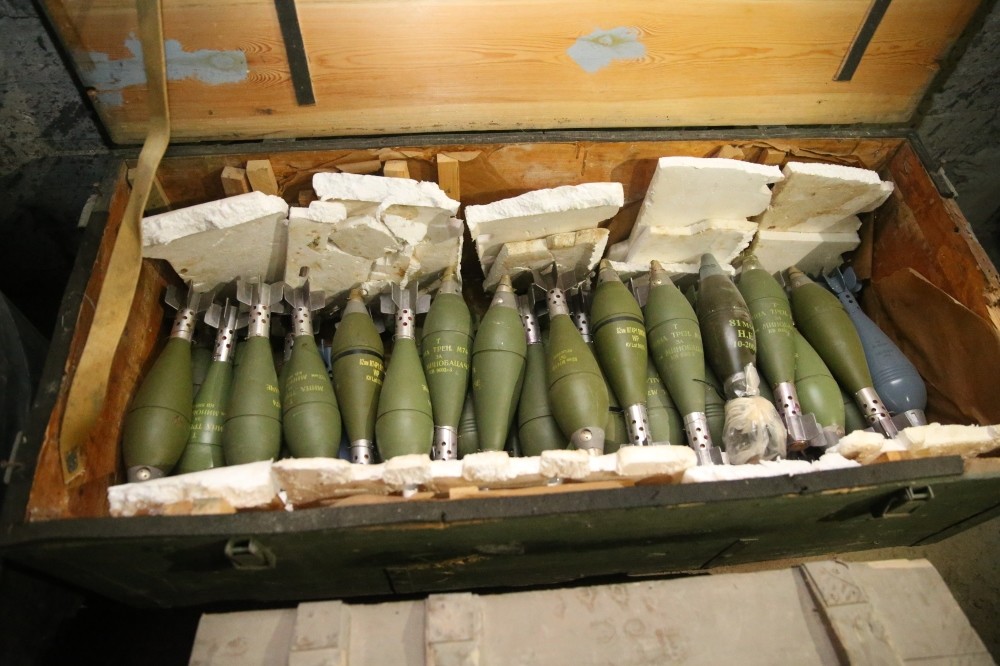 A large amount of weaponry in a YPG underground, 12-room depot was captured by the Turkish military and Free Syrian Army (FSA), in Afrin, on Sunday.
by Daily Sabah Mar 21, 2018 12:00 am

The Turkish military is aiming to prove that the YPG used weapons against Turkey that were provided with the U.S. by the serial numbers on the captured weapons

The Turkish Armed Forces (TSK) are reportedly collecting data on the serial numbers and origins of weapons and ammunition captured after the Turkish military took control of Afrin on Sunday to prove that the People's Protection Units (YPG) has received aid from the West.

A large amount of weaponry in a YPG underground, 12-room depot was captured by the TSK and Free Syrian Army (FSA), which originates from the U.S. Despite Ankara's reiterated concerns, the U.S. did not retrieve weapons from the YPG that it gave under the pretext of fighting Daesh.

The TSK is now collecting weapons found in the ammunition depots in Afrin. After the process, the cases will be sent to the respondent countries through diplomatic channels. These cases are aimed at proving Turkey's commitment to the fight against terrorism via concrete proof, reports said.

Thousands of U.S.- and Russian-made anti-aircraft flak and DShK rounds, anti-tank rockets, artillery shells, rocket launcher ammunition and various kinds of tank ammunition and U.S.-made TOW rockets were seized in a 12-room underground ammunition depot belonging to the YPG during detection operations by the TSK and the FSA in the village of Cuvek, in northwest Afrin. Instead of bombing the 150-meter-long depot, the FSA entered it and took over control without harming any of the civilians hiding inside, said the sources who refused to be named due to restrictions on speaking to the media. In early February, a Turkish tank was hit by the YPG using an anti-tank missile as Turkish troops were advancing on Afrin. During the incident, six soldiers were killed.

Turkish officials frequently warned the U.S. to stop supporting terrorists. President Recep Tayyip Erdoğan slammed the U.S in a speech at the Justice and Development Party (AK Party) parliamentary group meeting yesterday. He said that the strategic partnership necessitates respect and support rather than deception.

"We wanted weapons from you in return for money. You did not give it to us, but you gave these weapons and ammunition to terrorist organizations for free. What kind of partnership is this? … We are now demolishing all of these. … We are gradually seizing all that ammunition," he said.

After Ankara's repeated concerns, the U.S. administration, under the term of President Donald Trump, said they would collect the weapons given to the YPG. Yet, the promise made to Ankara has not been kept, Turkish officials say.

Interior Minister Süleyman Soylu also previously said that Turkey's so-called partners provide weapons to terrorists. "Those who act like our allies and friends supply weapons to the PYD [Democratic Union Party]. You would be baffled if you saw the weapons seized in caves. The weapons get in the hands of the PKK and are being used against us."

The TSK launched Operation Olive Branch on Jan. 20 to neutralize the YPG in Afrin, in northwestern Syria. Last week, a significant part of the operation was finalized after the Turkish military and FSA took control of the main city.

Afrin has been a major center for the PYD and YPG since July 2012, when the Syrian regime left the city to the YPG without a fight. Turkey is carrying out Operation Olive Branch as it exercises its right of self-defense, within international law, U.N. Security Council resolutions No. 1624 (2005), 2170 (2014) and 2178 (2014), and Article 51 of the U.N. charter, with full respect for Syria's territorial integrity.