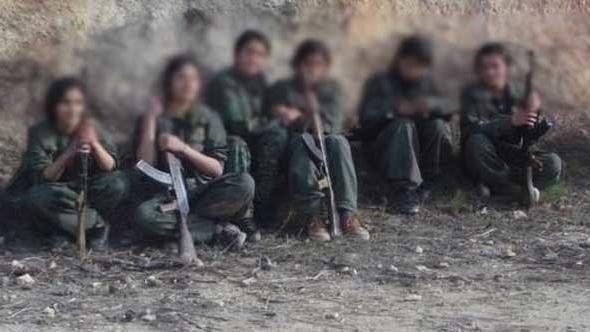 The PKK terror group's Syrian offshoot People's Protection Units (YPG) is using young children to carry out its heinous plans, a confession from a 17-year-old Syrian member of the group has revealed.

The Syrian teenager, identified by the initials A.S.T., said he joined the YPG/PKK terror group when he was just in the eighth grade in school. His family was poor and he needed money, he said.

He said he was tasked with preventing Kurds from crossing into Turkey from Syria.

He was captured by the Turkish Armed Forces in the countryside of Afrin when the terrorists were planning an attack on the Turkish military and the Free Syrian Army (FSA) fighters.

In his testimony, A.S.T. said: "After our training ended, I was assigned to Ras al-Ayn, to the borders of Turkey. Here, we were on duty for seven to eight months to obstruct the Syrian and Arab people trying to cross from Syria into Turkey."

The boy continued by saying that Operation Olive Branch started while they were training in Manbij and it stopped when the operation was launched. He added that the terrorist group sent a total of 80 people who were being trained to support YPG militants in Afrin.

He noted that although he did not receive training from foreign soldiers in Manbij, he had seen Russian and U.S. troops there.

A.S.T. also highlighted that the YPG sent about two busses of militants equipped with weapons and uniforms to Afrin through regime-controlled areas.

"Our aim was to stop the FSA and Turkish Armed Forces troops from moving toward the city center in the Afrin countryside. That's why we came to the Arshali neighborhood as a group," the boy said, adding that they were supposed to determine the whereabouts of the FSA and Turkish troops there and attack if they could or ask for reinforcements.

"The YPG terrorist organization is trying to fight Muslims with Muslims by using Kurdish youth in their own and western states' wills. I understand now," he added.

A.S.T. has been charged with "disrupting the unity and integrity of the state" at the Third Criminal Court in southern Hatay province and faces a life term if convicted.

Turkey launched Operation Olive Branch on Jan. 20 to clear terrorist groups from Afrin in northwestern Syria amid growing threats from the region and liberated the town on March 18.

On Saturday, in a statement the Turkish General Staff said that Afrin has been taken under "complete" control and efforts are in progress to help civilians return home in a secure way.