Past European tolerance allowed threats posed by PKK to grow 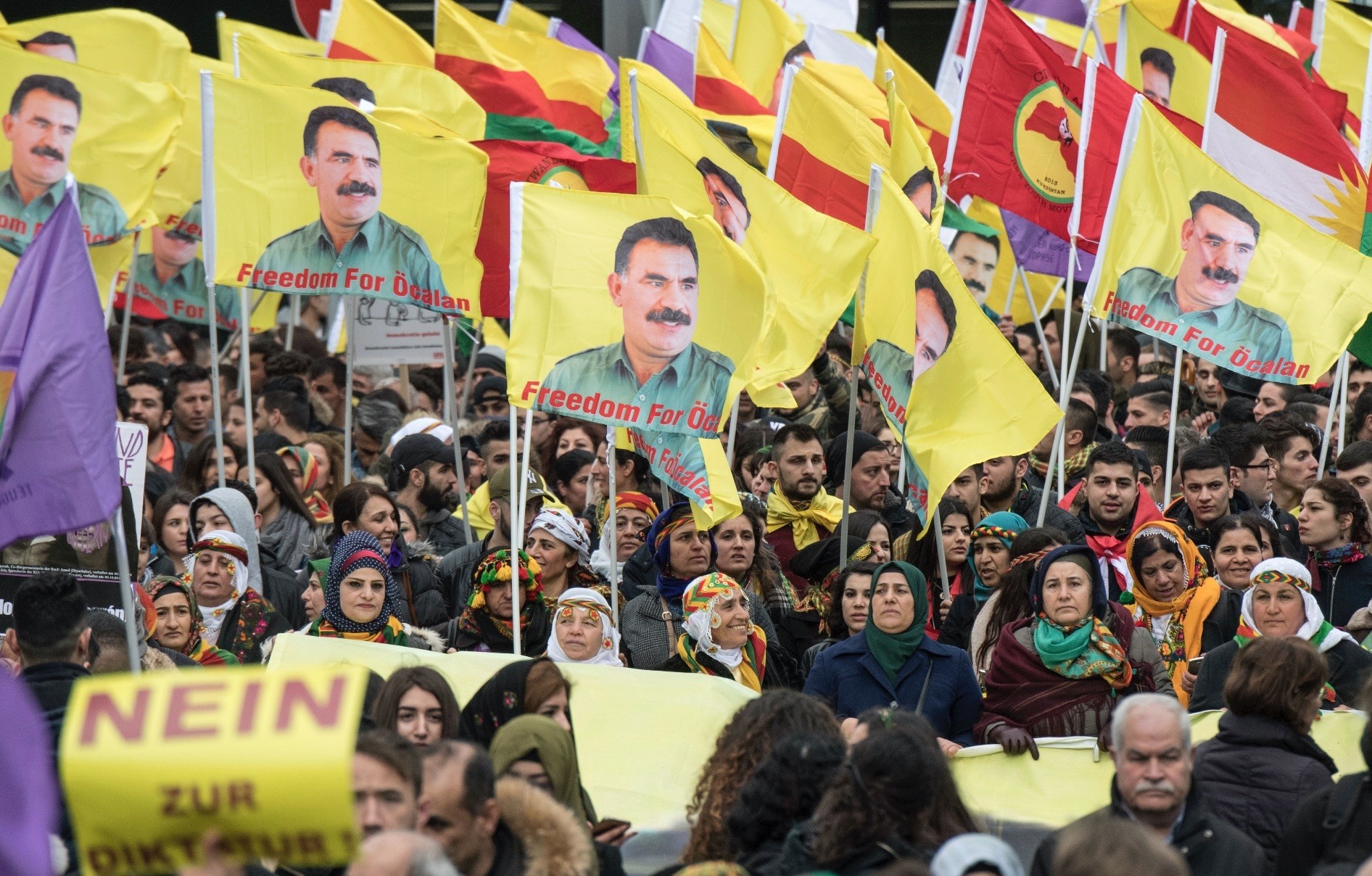 Ignoring the warnings from Ankara on PKK terrorism, Europe has allowed the growth of the group, which now causes disorder in EU cities

The tacit lenience given to the sympathizers and members of the PKK terrorist organization by many European countries over the years has finally given militants the courage necessary to escalate their actions into violent attacks against Turks and the wider Turkish community.

The PKK, a group recognized as terrorists by Turkey, the EU and the U.S., has had significant presence in Europe for decades. It was in Europe that the group found its main financing and recruiting ground. A protection racket targeting Kurds continues to be one of the main income generators for the terrorist group.

Over the years, European governments preferred to tolerate mainly nonviolent demonstrations by the PKK's militants and sympathizers, even though they recognized it as a terrorist group. In a recent statement, the Apoist Youth Initiative openly said it would be turning every inner city of Europe to ashes. This demonstrates the fallacy of equating socially conscious activists practicing their democratic rights and sympathizers and militants promoting terrorist groups.

The Apoist Youth Initiative, whose name is inspired by jailed leader of the PKK Abdullah Öcalan, is just one PKK-affiliated group in Europe targeting Turks and the Turkish community.

In response to Turkey's Operation Olive Branch launched on Jan. 20 against the PKK's Syrian affiliate the People's Protection Units (YPG) in Afrin, Syria, the escalation was immediate.

Data recently compiled by the Political, Economic and Social Research Foundation (SETA), has shown that the attacks on the Turkish community's establishments by the followers of the PKK terrorist group across European cities has increased by more than 500 percent this year.

The data shows that in the first three months of 2017 – from Jan. 1 to March 15 – there were seven violent attacks on Turkish diplomatic missions, NGOs and mosques.

For the same period in 2018, however, the attacks saw a 589 percent increase, with 61 attacks committed so far on establishments administered by Turkish people in Europe.

Among the attacks in 2017, six attacks occurred in Germany, one in Greece, one in Switzerland and one in Sweden.

In its attacks, the group frequently targets mosques, civil society associations and businesses owned by European Turks. The severity of attacks have ranged from material damage such as graffiti on walls, to throwing Molotov cocktails, setting places ablaze and personal attacks.

Witnessing a sharp increase this year, there have been 42 attacks in Germany, six in France, five in the Netherlands, three in Switzerland, one in Austria and one each in Greece, Switzerland, Denmark, Ireland and the U.K. against the Turkish targets.

The attack on Koca Sinan Mosque in the German capital city of Berlin took place on March 10 and came only a day after another attack on another mosque in Germany. Akşemsettin Mosque in Lauffen in Baden-Württemberg was the target of a Molotov cocktail attack as well.

In one of its recent incidents, the PKK followers stormed a Social Democratic Party (SPD) building in Frankfurt in a smear campaign against Turkey's operation in Syria. A group of 50 PKK/YPG supporters gathered in front of the SPD's building to protest Turkey, while some stormed into the building and hung banners reading "free Afrin." According to German media, the terror group's sympathizers demanded that the SPD "present a clear stance against the operation in Afrin and end German arms sales to Turkey." The SPD building in Hamburg, Germany, was also raided in February by the group to protest Germany's "involvement" in the operation in Afrin region via arms sales to Turkey.

In Italy, throughout March, PKK supporters protested Italy's military deals with Turkey by burning a replica of a warplane in front of the Turin-based Leonardo-Finmecanica defense company. Similarly in Greece, PKK sympathizers threw Molotov cocktails at Greek police outside the Turkish Consulate in Thessaloniki who were stationed to protect the consulate building. The U.K. has also seen a rise in the PKK attacking public order. On March 11, two of the UK's biggest cities, London and Manchester, PKK supporters invaded train stations and delayed train services, shouting slogans against Turkey and carrying posters of imprisoned PKK leader Abdullah Öcalan. A similar attack also happened in the Netherlands, when the PKK followers occupied a train station in Utrecht on Jan. 31.

However, the spike in attacks, combined with lack of effective measures against the group by most of the EU member states, have raised safety concerns for both the Turks and non-Turks.

"There are no precautionary measures taken," Levent Taşkıran, who is from Germany's Cologne area and is president of the Turkish University Students and Academics Association, says.

Taşkıran adds that the lack of effective precautions also affect the public order. "Public order is in danger, particularly for Turks in Germany," he adds.

According to a recent report by German media, which was based on information from the German Interior Ministry, 37 attacks targeted Turkish establishments in Germany this year while last year the number of attacks was 13. At times, there have been discrepancies between the official numbers and the data compiled by non-state organizations due to variations in the definitions used for terrorism and violence.

"Whether it is Turkish Embassies, AKP [Turkey's ruling Justice and Development Party] clubs like UETD [Union of European Turkish Democrats], Turkish fascists and their shops and cafes or [German] State institutions (SPD / CDU offices, police, courts), whoever supports the war against our people and defends it will have to pay for it," the Apoist [Followers of the PKK's imprisoned leader Abdullah Öcalan] group also said in its statement.

The Interior Ministry spokesperson told the Funke Media group that these numbers might rise soon.

There is widespread belief that the escalation in PKK attacks was caused largely by the tolerance shown to the group's demonstrations in the past. Turkey has severely criticized European governments, especially the German one, for tolerating rallies where PKK symbols, posters and other paraphernalia are openly displayed.

"Despite having a left-leaning worldview, I am opposed to attacks on places where people practice their religion," Cemal İnan, a Kurd from Hamburg, who has been living in the country since the 1970s, says.

İnan, in his mid-50s, says the German governments should not allow banned symbols of the PKK to be used in mass rallies, as it is a group outlawed by the EU laws and its symbols are also banned in Germany.

Germany, which is home to around 3 million immigrants from Turkey, listed the PKK as a terrorist group in 1993, after violent protests carried out by group members in the country, but the group is still active in the country, with more than 14,000 followers.

"German security officials only act upon complaints, but there are no preventative measures ahead of the attacks, other than paying a lip service," İnan adds.

Turkey has long warned its European allies to move from mere rhetoric against the group to taking concrete action, as the group will eventually bring its violence to European cities. However, Ankara's demand has not yet come to realization.

Jonas S. from Germany's Münster, who did not want to divulge his name, says he personally does not feel threatened, "but the increase in actions in Germany, which can be attributed to the PKK, is already cause for concern."

The 32-year-old adds that "the state must pursue all terrorist activities and also act in a preventive manner. If, of course, large numbers of PKK members or sympathizers receive asylum here, that is questionable."

"As an interested German citizen, I am concerned when foreign institutions are attacked in that country, be it by rights [groups] or by a foreign terrorist organization," Dr. Johannes Henrich, a researcher, who has been focusing on Turkey for about 13 years, says.

Henrich says he witnessed the PKK get stronger overtime in Europe while the authorities did not act upon this growth, and that he does not "feel comfortable seeing that a group has been allowed to develop this way."

"The increase in PKK attacks in Germany, especially on Turkish institutions and mosques, is an issue [Turkish President Recep Tayyip] Erdoğan warned Germany against months ago. Anyone who shelters terrorists will eventually get back a boomerang," Henrich adds.

"PKK attacks in Europe have been going on for a while"

Prior to the recent sharp increase this year, the PKK attacks were also carried out against Turkish establishments, even though in less frequency and have received almost no coverage on Western media outlets.

"A significant number occurred in the context of demonstrations for or against the PKK. Turkish properties and institutions were damaged by incendiary devices," with some mounting to a large amount of financial loss, a Europol, European Union Agency for Law Enforcement Cooperation, report from 2017 said, referring to the group's attacks in Europe.

Built on a Marxist-Leninist ideology, the PKK was founded in 1978 in Turkey, with the separatist aim of establishing an autonomous Kurdish state. Its presence in Europe, however, emerged in the late 80s to early 90s and has been getting stronger since.

The PKK attacks on the Turkish community, "are a serious problem for social and political cohesion and order in Europe, and have been for some time," Kyle Orton, an independent researcher from the U.K., who has been focusing on PKK activities told Daily Sabah.

In addition to its fight against PKK terrorism domestically, Ankara has vowed that it will clear all PKK threats from its borders, including northern Syria and northern Iraq. Operation Olive Branch was launched to eliminate the presence of the PYD and its armed wing, People's Protection Units (YPG) as Ankara argues it constitutes a national security threat to its borders.

The Europol report adds that PKK has recruited its members among the Kurdish community in Italy, for activities in Europe or to be exported to conflict zones. In addition, the report adds that "Switzerland stated that the PKK were maybe running a number of ideological training camps for its youth in remote pre-Alpine areas during the second half of 2016."

Orton adds that the PKK's organizational activities "should be taken as seriously as other terrorist groups and legislation should be used in the prosecution of politically-motivated attacks on people and property by the PKK and its operatives in Europe."