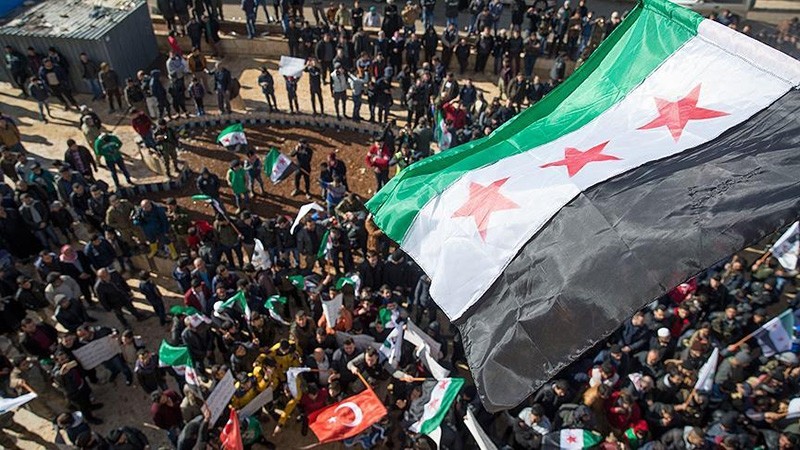 The residents of northwestern Syria's Tal Rifaat and numerous Free Syrian Army (FSA) fighters gathered in the city to stage a protest, asking Turkey to help liberate their territories in the ongoing Operation Olive Branch.

Turkish forces and regional security units on scene were able to calm the crowd of hundreds down, who later dispersed without any trouble.

In early 2016, PKK-linked YPG terrorists spread to the southeastern regions from Syria's Afrin thanks to the backing of the Assad regime and Russia, leading to the forced migration of around 250,000 residents in Tal Rifaat.

Those who fled took shelter in Syria's Azez district, which was under the control of the Syrian opposition and also located near the areas included in Turkey's Operation Euphrates Shield.

Tal Rifaat Regional Council Head Mahmud Allito told Anadolu Agency previous to the Operation Olive Branch that the residents of the city were waiting for the terrorist threat in Afrin to end so that they can return to their homes.

Meanwhile, the Turkish Armed Forces (TSK) announced Saturday that the Afrin region has been completely taken under control by Turkish and FSA forces.

As part of Operation Olive Branch, launched Jan. 20 to clear the PKK's Syrian-affiliated People's Protection Units (YPG) and Daesh terrorists from the Afrin region, Turkish Armed Forces (TSK) and the FSA entered Afrin town center and liberated it from terrorists on March 18.

Turkish and FSA units then focused on the remaining villages in the region.