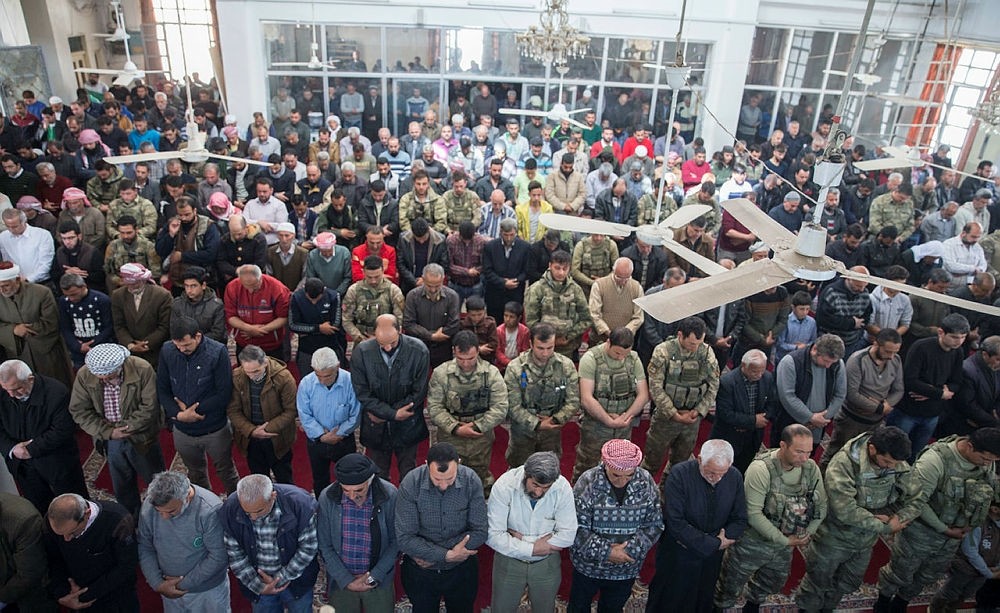 Turkish troops performed Friday prayers alongside the residents of the northwestern Syrian city of Afrin in the first Salat al-Jumu'ah since the liberation of the city from the PKK-linked People's Protection Units (YPG) terrorist organization last week.

In the central mosque of Afrin city, locals stood shoulder to shoulder with the Turkish troops and the Free Syrian Army fighters to perform the weekly Islamic prayer.

In his sermon, the imam of the mosque thanked the Turkish army commanders for clearing the area of the terrorists, saying that Afrin residents should now stand together in unity.

Some of the worshippers extended their gratitude to the Turkish troops following the prayer while others expressed happiness for having formed the Friday prayers in peace for the first time in a long while.

After liberating Afrin's town center -- formerly a major hideout for YPG/PKK terrorists -- on Sunday, the Turkish army started taking measures to oversee security and order there.

Turkey launched Operation Olive Branch on Jan. 20 to clear terrorist groups from Afrin in northwestern Syria, amid growing threats from the region.

The operation is aimed at establishing security and stability along Turkey's borders and the region as well as protecting Syrians from terrorist cruelty and oppression, according to the Turkish General Staff.