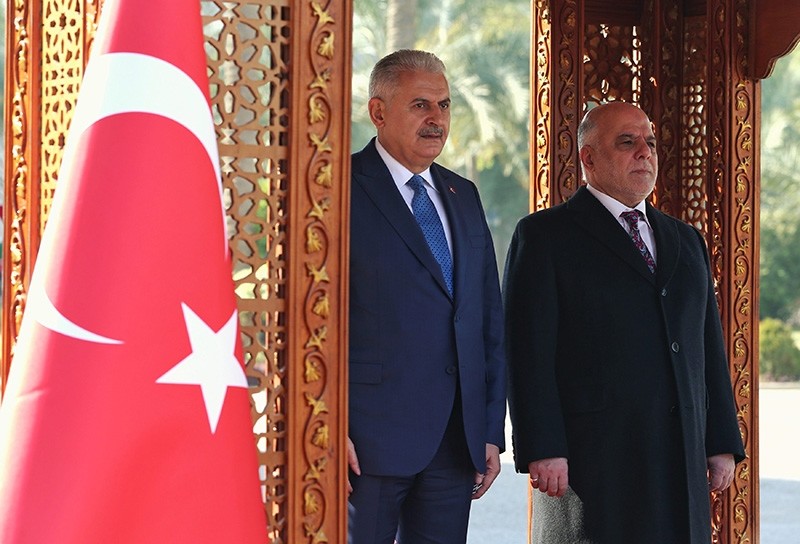 The importance of close cooperation with Iraq in the fight against PKK terrorists in the region was also emphasized during the call.

Ankara has been highly vocal in its criticism of the PKK's foothold in Sinjar, as the terrorists' position on the Turkish border poses a significant threat to the country.

President Recep Tayyip Erdoğan said Monday that Turkey expects Baghdad to conduct an operation against the PKK in Sinjar.

On Sunday, Iraq said it had deployed troops to parts of Sinjar where the PKK had retreated.

"He was accompanied [on his visit] by senior Defense Ministry officials," the statement read.

While in Sinjar, located 120 kilometers northwest of Mosul, al-Ghanmi plans to inspect the army's 15th Brigade, contingents of pro-government Yazidi forces, and the border area between Iraq and Turkey.

The globally-recognized terrorist group announced its withdrawal from the northwestern province, as Turkey expressed its determination to expand the scope of Operation Olive Branch in Syria's northwestern Afrin to northern Iraq.

Fırat News Agency, the media group that is known for its link to the terrorist organization, reported that the PKK is withdrawing its militants since it "reached its goal" of diminishing Daesh from the city.

In mid-2014, the PKK managed to establish a foothold in Sinjar on the pretext that it was protecting the local Yazidi community from Daesh.

Recently, the Mosul local council gave the PKK terrorists a 10-day ultimatum to leave northern Iraq's Sinjar district, according to a council chairman. According to intelligence sources, the PKK has moved its military resources and command-control mechanisms from the Qandil Mountains in northeastern Iraq to Sinjar in the northwest.

In the face of growing security threats to the country, Turkey launched Operation Olive Branch into Afrin in northwestern Syria on Jan. 20 with the Free Syrian Army (FSA) and took control of the Afrin city center from the PKK-linked People's Protection Units (YPG).

Ankara has repeatedly said that it will not allow any terrorists to establish footholds along its borders. The Turkish Armed Forces (TSK) has been launching airstrikes on the PKK in northern Iraq.

Meanwhile, first Turkish plane landed in Irbil, the administrative capital of northern Iraq's Kurdistan Regional Government (KRG), Tuesday after Turkey lifted its six-month ban on flights to the city. The aircraft of Turkey's national flag carrier Turkish Airlines (THY) arrived at Erbil International Airport (EIA) at 2:30 a.m. local time (11:30 p.m. GMT) with over 150 passengers on board.

An international flight ban was imposed last Sept. 29 in response to an illegitimate poll on regional independence carried out by the KRG.