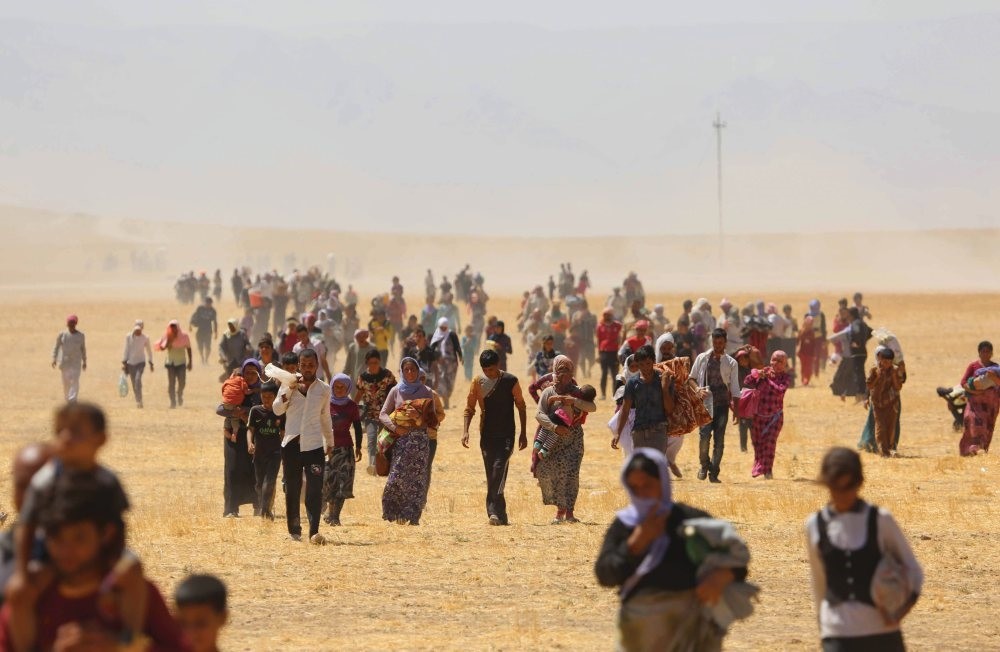 According to locals, 80 percent of Sinjar's Yazidi population left the city due to Daesh and PKK presence and are still afraid to return to their hometown.
by Daily Sabah with AA Apr 05, 2018 12:00 am

Yazidi authorities want the PKK to leave their region since the terrorist organization forces locals to fight in Syria on behalf of itself against Turkey, despite initially claiming to protect them

Yazidi authorities from the religious minority group in Iraq have raised their voices against PKK and its Syrian affiliate People Protection Units (YPG) brutality in Iraq and Syria, wishing for the region to be liberated from the terrorist organizations, which have forcibly conscripted thousands of young Yazidis.

According to information gathered by Anadolu Agency (AA), leading Yazidi figures say that the PKK pressure has increased even more lately, especially in the Iraqi city of Sinjar, which the PKK took control of in 2014 saying it was protecting Yazidis from Daesh. However, since then, many Yazidi youth have been forcibly conscripted by the organization and even brought to Afrin to fight against the Turkish Armed Forces (TSK).

A consultant in the Yazidi synod, Karim Suleiman, released a statement in late February that said he is completely against the sending of Yazidis to Syria to fight. He also said that organizations like the PKK pose a threat to regions in which Yazidis live and that many diaspora Yazidis are scared to return to Sinjar due to the presence of these groups.

The former district governor of Sinjar, Mahma Halil, also mentioned similar issues that Yazidis deal with, adding that conscription escalated after Turkey launched Operation Olive Branch on Jan. 20 in order to liberate Afrin from the YPG.

A Yazidi deputy in KRG parliament, Şeyh Şamo, said in a recent interview that until now, the PKK has kidnapped many Yazidi youth from Sinjar and forced them to fight in Syria. He added that it is not a new phenomenon for Yazidis to face such a thing and that many Yazidis were killed while fighting in YPG ranks Manbij.

He also said that the PKK does not aim to protect Sinjar, but uses Yazidi men and women for their own purposes. The chief of Sinjar District Council, Veys Nevaf, also said armed Yazidi groups refused to go to Afrin to fight for the YPG.

Kadir Kaçak, who is former KRG President Masoud Barzani's Kurdistan Democratic Party's (KDP) representative responsible in Sinjar, said the people of Sinjar are not comfortable with the PKK being in the region for the last three years. He added that the PKK should be cleared from the city as soon as possible. He said that the PKK collects tribute from civilians in the region and uses the money to arm Yazidis. He added that 80 percent of the city's population migrated from the city due to the PKK and some were even shot by the terrorist organization while trying to escape.

In mid-2014, the PKK established a foothold in Sinjar after driving Daesh out of the region.

In March, the Mosul local council gave the PKK a 10-day ultimatum to leave the area in northern Iraq, according to a council chairman. According to intelligence sources, the PKK has moved its military resources and command-control mechanisms from the Qandil Mountains in northeastern Iraq to Sinjar in the northwest. However, on Sunday, Turkish security and intelligence sources said they are aware that the PKK is still in Sinjar under the name of the Sinjar Resistance Units (YBŞ) and have not left the area.

Ankara has been highly vocal in its criticism of the PKK's foothold in Sinjar, as the terrorists' position on the Turkish border poses a significant threat to the country. The Turkish government has repeatedly called on Baghdad to eradicate the PKK threat in Sinjar. If not, Ankara said the TSK will exercise its rights and launch an operation into Iraq in the area as it did in Operation Euphrates Shield and Operation Olive Branch in Syria.