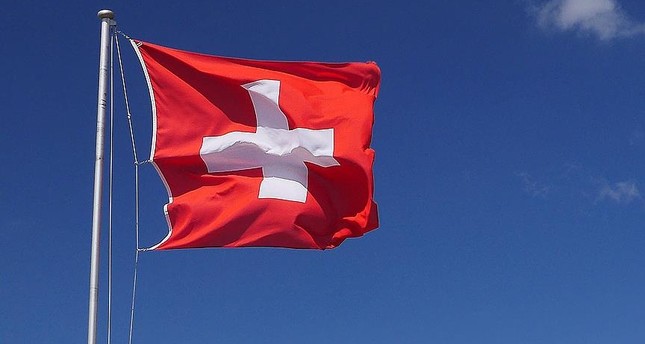 Senior representatives of two nongovernmental organizations (NGOs) condemned ads on public transport in Switzerland by the PKK and its Syrian affiliate the People's Protection Units (YPG), slamming Geneva authorities for failing to take action over the campaign on Wednesday.

The advertisement campaign on Geneva trams is running with the title "Free Kurdistan" and points out alleged human rights abuses in Afrin, northwestern Syria.

On Jan. 20, Turkey launched Operation Olive Branch to clear PKK, YPG and Daesh terrorists from Afrin. There are organic links between the PKK and the YPG as they share the same ideology and organizational structure. However, the PKK, a group recognized as terrorists by Turkey, the EU and the U.S., has had a significant presence in Europe for decades.

Following the criticism, the Canton of Geneva said it was responsible for the PKK-affiliated People's Protection Units' (YPG) ads on public transport in the city of Geneva, adding that the government could not intervene to stop them.

"The Swiss constitution guarantees the freedom of expression. It lies within the discretion of the authority of the canton to authorize the posting of banners in the public domain, in conformity with Swiss law and public order," Noemie Charton, spokeswoman of the Federal Department of Foreign Affairs (FDFA), said in an email to Anadolu Agency.

"The decision to put up or take down posters does not rest within the competency of the Federal Department of Foreign Affairs," Charton added.

She added Turkey and Switzerland enjoyed good relations and offered to explain the issue further if the need arose.

Celil Yılmaz, secretary-general of the Strasbourg-based NGO, the Council of Youth Multicultural (COJEP), told Anadolu Agency (AA) the terrorist group intended to launch a smear campaign against Turkey's operation with the images used in the ads.

"This morning, Geneva, known as the center of human rights in the world, woke up to the propaganda ads of YPG and PKK supporters," Yılmaz said. "We thoroughly condemn these advertisements."

"This cannot be explained in the name of freedom of expression," he said, calling the ads on the trams "a black mark" in history.

"We, as the Turkish community in Switzerland, will send a letter to Geneva cantonal authorities and Swiss Federal officials to underline the realities and our discomfort over the ads and request a meeting to discuss the matter," he said.

He added that he will build a campaign with other civil society representatives and discuss the matter in the U.N. Human Rights Council in Geneva in September.

Ender Demirtaş, head of the Geneva-based International Alliance for Human Rights and Development, also condemned the ads. Demirtaş said an official application has been submitted to remove the ads from the trams. He said a previous attempt by the NGO to place ads on trams about Qatar's crisis with some of its Arab neighbors was rejected on the grounds that "it was involved with another country's internal affairs."

Last summer, a Saudi-led bloc of states including the United Arab Emirates, Egypt and Bahrain collectively severed relations with Qatar, accusing Doha of supporting terrorist groups in the region. Demirtaş described the practice as a "double standard."

It was in Europe that the PKK found its main financing and recruiting ground. Over the years, European governments preferred to tolerate mainly nonviolent demonstrations by the PKK's militants and sympathizers, even though they are recognized it as a terrorist group. However, in response to Turkey's Operation Olive Branch, the PKK escalated its terrorist activities in Europe, targeting mainly Turkish institutions while also threatening to terrorize European cities if the operation continues. Data recently compiled by the Political, Economic and Social Research Foundation (SETA), has shown that the attacks on the Turkish community's establishments by the followers of the PKK terrorist group across European cities increased by more than 500 percent in the first three months of 2018 compared to the same period last year.

Meanwhile, after the arson attack on a Turkish mosque in German city of Kassel, a letter of confession from suspected left-wing extremists was posted on the internet. The police spokesman for the Kassel police told FOCUS Online that they are investigating the confession, which said the attack was conducted in support of the PKK. Whether the authors actually threw three incendiary devices on the night of March 25 at the Turkish cultural center is still unclear.

The alleged confession letter was published on a scene portal, signed with "Antifa International." The reason given is that the cultural center is a "meeting place for Turkish fascists," and that the action is part of a campaign of solidarity with the YPG in Syria, where Turkey has launched a military offensive to eliminate the terror group.

Due to the link between the PKK and the YPG, Turkey argues that the presence of the YPG in northern Syria constitutes a national security threat to its borders and that it will continue operations until all terror elements are eliminated from its borders.

Germany has a 3 million-strong Turkish community, many of whom are second and third generation German-born citizens of Turkish descent whose grandparents moved to the country in the 1960s. The PKK has been banned in Germany since 1993, but remains active, with nearly 14,000 followers among the country's Kurdish immigrant population. Turkey has long criticized Germany for not taking serious measures against the PKK, which uses the country as a platform for their fundraising, recruitment and propaganda activities.