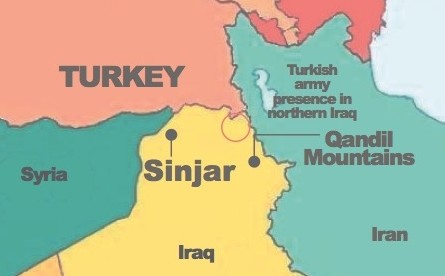 The Turkish army has pushed about 25 kilometers into northern Iraq toward Mount Qandil to eliminate the PKK terrorist organization's leadership. The move is part of efforts to completely eradicate the terrorist group's presence in the region. Interior Minister Süleyman Soylu said yesterday that Turkey could soon launch an anti-terror operation on the mountain, stressing that it is not a matter of tactical concerns but a matter of timing. "Qandil is no longer a faraway goal for us," Soylu told Anadolu Agency (AA). Mount Qandil, roughly located 40 kilometers southeast of Turkey's border with Iraq's Irbil province, is regarded as a very crucial target for the Turkish Armed Forces (TSK) since it has long been used by as headquarters by the PKK and its Iranian affiliate, the Kurdistan Free Life Party (PJAK).

Members of the PKK leadership including Murat Karayılan and Cemil Bayık are thought to be hiding in the region. Soylu added that several key points near northern Iraq's Hakurk were cleared of PKK terrorists and Qandil will also become a safe place for Turkey, soon. Last week, Turkish troops reportedly took control of the Bradost region and entered Barazgir valley, which is considered a gateway to Qandil, as part of the operation which reportedly began in early March. According to sources, the military initially aims to cut Qandil's connection with Sinjar and other parts of Iraq to hinder logistics. Also, the Iranian army called on civilians in the region to leave the Qandil area until Tuesday.

Prime Minister Binali Yıldırım also said on Saturday that Turkey has set up 11 regional bases in northern Iraq and doubled the presence of its troops, adding that the objective of recent military operations is eliminating PKK threats before it reaches the border.

The TSK has not yet announced details of the ongoing operations, however, several pictures circulating on social media showed the presence of Special Forces in villages close to Qandil. Turkish officers were also seen in videos meeting with Kurdish locals in a village in northern Iraq.

The PKK intensified its attacks to curb the TSK advance and activities in northern Iraq. In the three separate attacks that took place last week, six soldiers were killed. 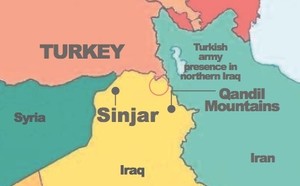 President Recep Tayyip Erdoğan said on Sunday that counterterrorism operation in Afrin had been successfully carried out and "now it is time for Qandil."

"June 24 [election day] will be a smack to terror barons in Qandil who knowingly send the youth of Diyarbakir to death," the president said at an iftar dinner in the Kurdish-dominated southeastern province of Diyarbakır.

Being under de jure control of the Kurdistan Regional Government (KRG), the area, where the Turkish army increased its presence, has been used to infiltrate Turkish soil and carry out attacks on soldiers in military outposts and during their patrol near rural areas.

The area has frequently been hit by the Turkish army in the last decade, which occasionally causes tension between the Turkish and Iraqi government due to the latter's objection for violating its independence. Mount Qandil became the main headquarters of the PKK in the '90s after the terrorist organization used the Bekaa Valley of Lebanon as training grounds for many years.

After Daesh's expulsion from northern Syria, the PKK's Syrian affiliate People's Protection Units (YPG) settled in the area, and also took control of the Sinjar Mountains. It connected PKK elements in Syria and Iraq.

Karachok in northeastern Syria to cut the corridor.

Formed in 1978, the PKK terrorist group has been fighting the Turkish government for an independent state. This terror campaign has caused the deaths of more than 40,000 people. The PKK is listed as a terrorist organization by Turkey, the U.S. and EU.

The PKK resumed its decades-old campaign in July 2015 after a three-year cease-fire period and since then more than 1,200 people, including security force personnel and civilians, have lost their lives.