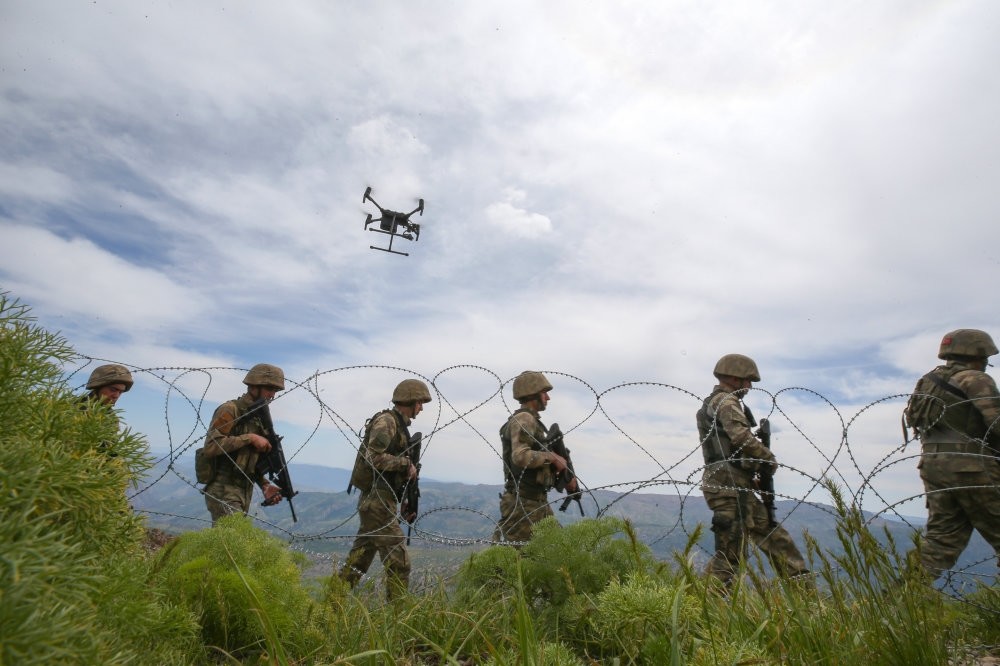 The Turkish military recently set up bases for tanks, helicopters and armed drones in the region.
by Daily Sabah Jun 12, 2018 12:00 am

Turkey launched an operation in the Qandil mountains in northern Iraq on Monday to clear PKK terrorists in the area and eradicate the leadership of the terrorist organization. President Recep Tayyip Erdoğan announced the operation during his rally in the central Anatolian province of Niğde, saying the main aim was to drain the terrorist group's swamps in the area. "We've launched our operation in Qandil… with 20 of our airplanes, we've destroyed 14 targets so far," the president said. The Qandil mountains, located roughly 40 kilometers southeast of the Turkish border in Iraq's Irbil province, are being used as the headquarters of PKK and its Iranian affiliate, the Kurdistan Free Life Party (PJAK), although the area is under de jure control of the Kurdistan Regional Government (KRG).

The area has frequently been hit by the Turkish Armed Forces (TSK) in the last decade. However, airstrikes on PKK targets in the region have been carried out regularly since July 2015, when the PKK resumed its decades-long armed campaign. Since last March, the number of operations in the region have escalated. Expressing that Qandil will no longer pose a threat for Turkey by serving as a source of terrorism, Erdoğan said that terrorist elements will be eliminated from the region just as they were eliminated in Afrin, Jarablus, al-Bab and Azez.

"Wherever terrorists go, sooner or later we will bring the terrorists to account for the killings of our soldiers," Erdoğan said, recalling that during Operation Olive Branch, more than 4,500 terrorists were killed in Afrin.

Operation Olive Branch was launched by Turkey in January to remove the PKK, its Syrian affiliate People's Protection Units (YPG) and Daesh terrorists from Afrin in northwestern Syria. 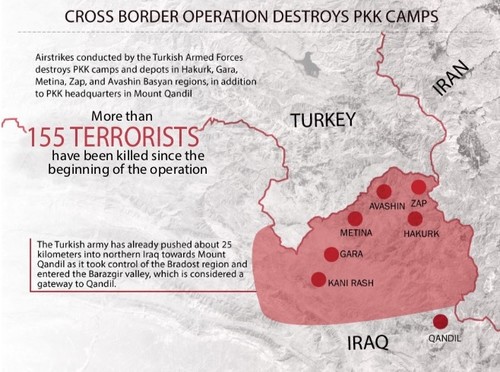 Afrin has been a major hideout for the YPG/PKK since July 2012 when the Assad regime in Syria left the city to the terror group without putting up a fight. The Turkish military entered Afrin and liberated it from terrorists on March 18.

Deputy Prime Minister Bekir Bozdağ said on Monday that Turkey has been applying the policy of "determining terrorism wherever it is and eliminating it" for a very long time.

Speaking to the Anadolu Agency (AA), Bozdağ stated that it is not possible for Turkey to conduct an operation without consulting the Iraqi government. Bozdağ also said that the dialogue between the two countries continues and although there may be disagreements on some issues, the operation will continue.

According to Nihat Ali Özcan, from TOBB University of Economics and Technology (ETÜ), the main reason behind the Iraqi government's support on the issue was the fact that they did not want a strong PKK in the region.

"Iraq would not want a non-state organization to gain so much strength within its own borders," said Özcan, adding that since the Iraqi air space is under the control of the U.S., Iraq and Iran, it is logical to assume that Turkey has already informed all of these parties of the issue.

According to sources, the military initially aims to cut Qandil's connection with Sinjar and other parts of Iraq to hinder logistics. The operation is also expected to cut relations of the PKK terrorists from their Syrian affiliates.

Since the beginning of the Turkish army's crossing into the Iraqi border in March, 155 PKK terrorists have been killed. The army had already pushed nearly 30 kilometers into northern Iraq towards Mount Qandil as it took control of the Bradost region and entered the Barazgir valley, which is considered a gateway to Qandil.

The Turkish military also recently set up bases for tanks and helicopters in the region. It is also establishing another base for unmanned aerial vehicles (UAVs) and armed drones. These domestically-produced UAVs have been effectively used against the terrorist group since 2015 in Turkey and in cross-border operations.

Turkey has previously carried out several cross-border operations in Iraq against PKK threats. While most of them were short-lived, the first extensive operation was carried out in May 1983, when 5,000 Turkish soldiers crossed the Iraqi border and advanced five kilometers. After a land operation on the Qandil mountains, they retreated.

Mount Qandil became the PKK's main headquarters in the 1990s after it used the Bekaa Valley of Lebanon as training grounds for many years.