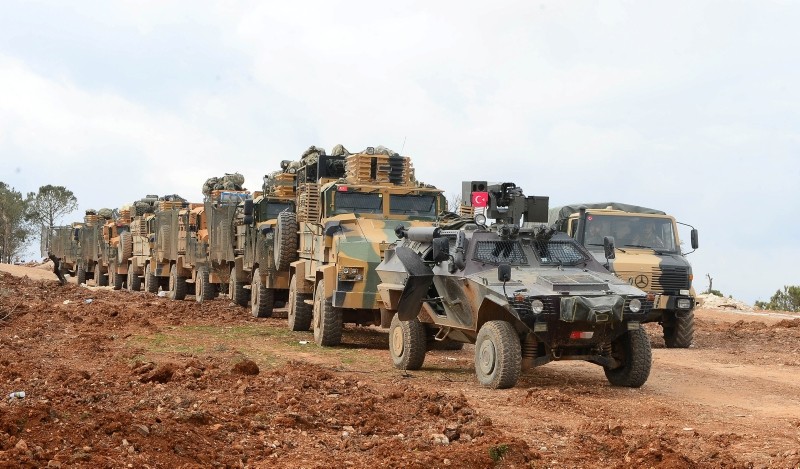 A convoy of Turkish military vehicles heading to northwestern Syria's Afrin during Turkey's Operation Olive Branch in the region. (AA Photo)
by Daily Sabah Jun 18, 2018 12:00 am

Turkish soldiers have started to enter the outskirts of Manbij, held by the PKK's Syrian affiliate the People's Protection Units (YPG), to provide security and assure peace in the town as part of an agreement with the United States, Pentagon and Turkish officials confirmed Monday.

According to a Turkish Armed Forces (TSK) statement, the Turkish army on Sunday began patrol activities in Manbij. President Recep Tayyip Erdoğan also said Monday that Turkish security forces have begun patrolling the area. "Right now, security forces have begun monitoring in Manbij," Erdoğan said in a speech during his election campaign in the northern province of Samsun. In addition, photos circulating on social media showed Turkish soldiers and armored vehicles enter the area. The convoy is reportedly escorted by a U.S. helicopter.

Eric Pahon, a spokesman for the Pentagon, told Daily Sabah that coordinated independent patrol activities by Turkish and U.S. forces began Monday along the demarcation line north of Manbij in accordance with the Manbij Roadmap and Manbij Security Principles.

" Both parties are continuing to plan for combined patrols, with a commitment to increase cooperation based on conditions on the ground. The coordinated patrols are part of the commitment to long-term security and stability in Manbij, and the U.S. commitment to NATO ally Turkey," Pahon said.

A Manbij road map was announced after a meeting in Washington between Foreign Minister Mevlüt Çavuşoğlu and U.S. Secretary of State Mike Pompeo in early June. The deal focuses on the withdrawal of the PKK-affiliated YPG from the northern Syrian city and stability in the region. It envisaged deployment of Turkish forces to assure peace in the region and train local forces to establish and maintain security.

Foreign Minister Çavuşoğlu said on June 13 that Turkey expects to use the Manbij deal as a model for other regions as well. He underlined that Syria should be completely cleared from terrorists and the Syrian people should be able to return to their country.

Çavuşuğlu said yesterday from the southern city of Antalya that security forces will also enter the Manbij town center and the city will soon be cleared off the terrorist group. "Security forces are patrolling areas between Manbij and the Euphrates Shield area. The aim of the operation is to establish stability in the region held by the YPG."

Manbij has been controlled by the YPG terrorist group, the United States main ally against Daesh, since 2016. Turkey has long demanded that the U.S. avoid cooperation with the YPG, objecting YPG presence west of the Euphrates River, including the predominantly Arab town of Manbij. The YPG previously announced a pullout from the area before the Turkish army entered the area.

The U.S. support for the Syrian Democratic Forces (SDF), which is dominated by the YPG, has long been a cause of tension between Ankara and Washington, sparking fears of a direct confrontation between the two NATO allies. Turkey previously launched Operation Olive Branch on Jan. 20 to eliminate the YPG from Afrin province in northwestern Syria. The YPG's ultimate aim is to establish an autonomous region in northern Syria by connecting the northwestern Afrin canton to the Kobani and Jazeera cantons in the northeast. As such, Turkey's operation aims to put an end to the group's autonomy plans, which Ankara terms a "terror corridor."

The U.S.-led coalition admitted that French Special Forces are in cooperation with the Syrian Democratic Forces (SDF), which are predominantly led by the YPG, near the Iraqi border of Syria.

The official Twitter account of the U.S.-led coalition shared a photo showing French Special Forces while they fire howitzers during Operation Roundup in Dashisha town located near the Iraqi border. The operation has been carried out coordinately with PKK-affiliated groups against Daesh in the eastern part of the country.

French troops have recently increased their presence in some areas in Syria including Manbij, al-Hasakah, Ayn Issa and Raqqah that are controlled by the YPG.

In May, a senior figure from the SDF said that 50 French soldiers had arrived in northern Syria's Manbij were building a military base in the northern part of the province.

Also, approximately 250 French soldiers are reportedly active in regions that are under the control of the SDF in northern Syria. In March, leaders of the SDF met with French President Emmanuel Macron in Paris. In relation to France's attitude toward the YPG, President Recep Tayyip Erdoğan has warned the country of not abetting terrorism.

The PKK has been waging a wide-ranging terror campaign against the Turkish state since the mid-1980s, in which an estimated 40,000 people have been killed.

The Anadolu Agency (AA) reported last week that Italy also has sent troops to provide support for the YPG, becoming another European country providing backing to the terrorist group.